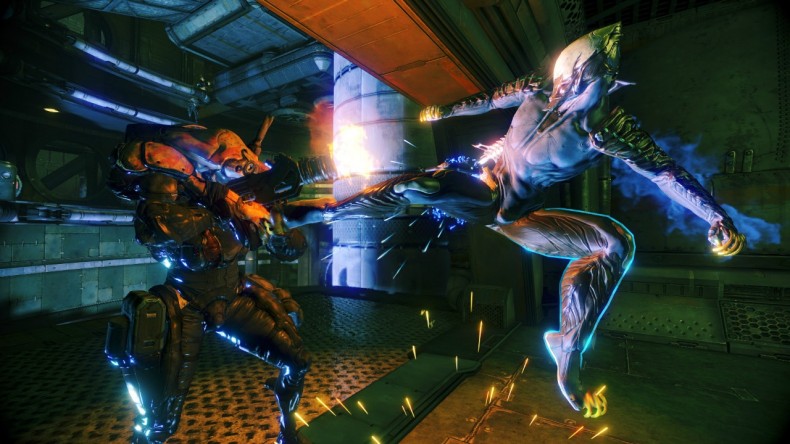 Playing with other people can be fun; The Warframe mods are a unique hook

The enemy AI is lame; Levels are often confusing mazes; The parkour-style wall climbing feature is almost completely broken; The UI is hideous

Warframe may be a costless game, but I can't think of a single person I would recommend it to. Way too many other free-to-play options exist to even bother with it.

The last free-to-play game I played (and reviewed) wasÂ Ascend: Hand of Kul. Â I enjoyed it; I’ve mostly forgotten about it, but at the time it was a decent distraction. A lot of people complain about microtransactions in free-to-play games, butÂ Ascend Â got them right by offering them but refraining from forcing them down players’ throats. I believe a game’s quality should be considered separately from its price, but I understand the gripes some people have. FortunatelyÂ Warframe, Â likeÂ Ascend, Â can be completed without paying a cent, which is great. Unfortunately it’s an entirely unoriginal and unmemorable third-person shooter. 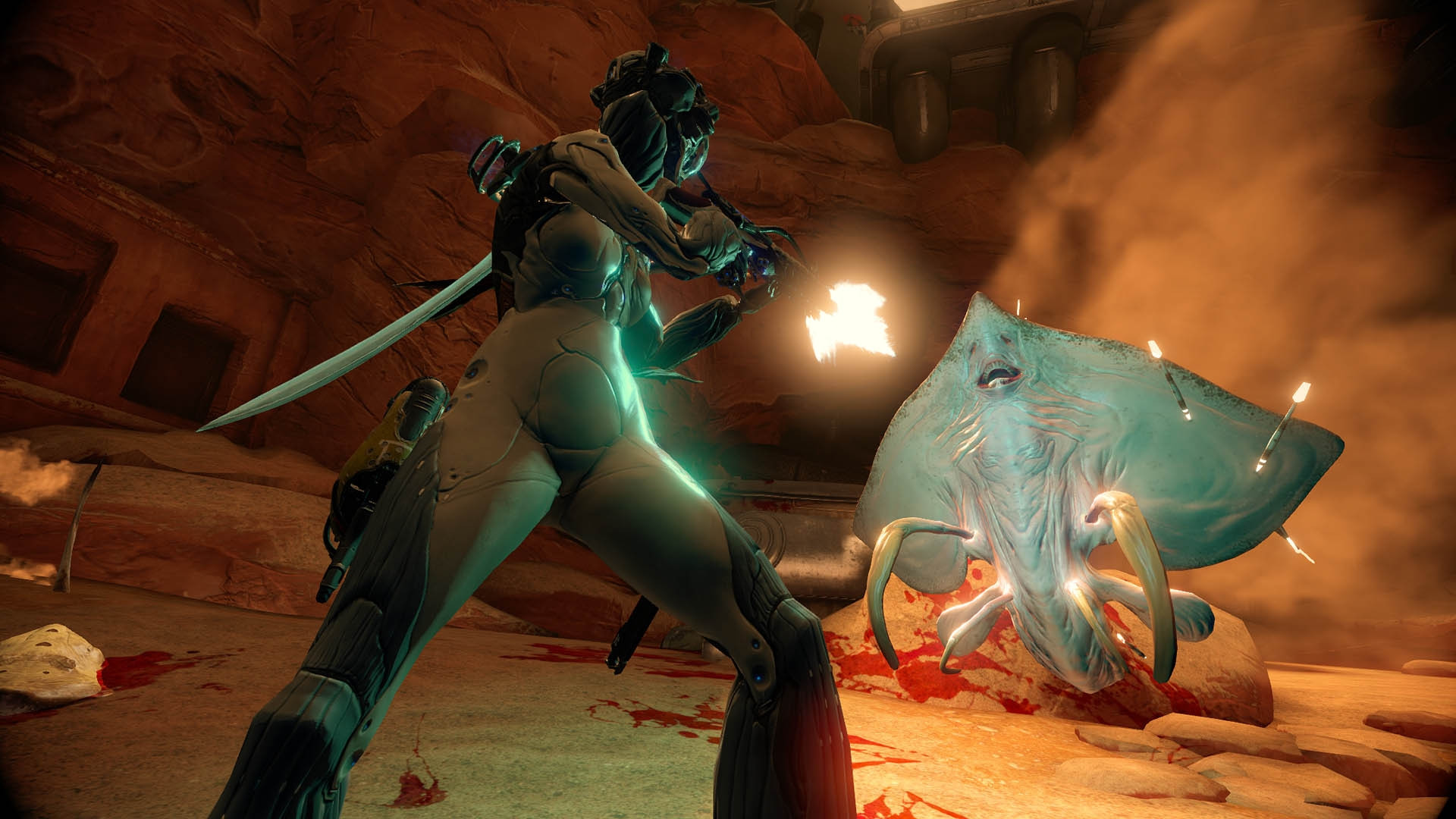 Players control a character that’s part of a race known as the “Tenno”. They are fighting the “Grineer”. In order to defeat the Grineer, members of the Tenno wear suits of armor known as “Warframes”. That’s pretty much it for the story. It’s not exactly captivating sci fi, but people who are searching for rousing tales in third-person shooters that are designed to be played online should probably look elsewhere. 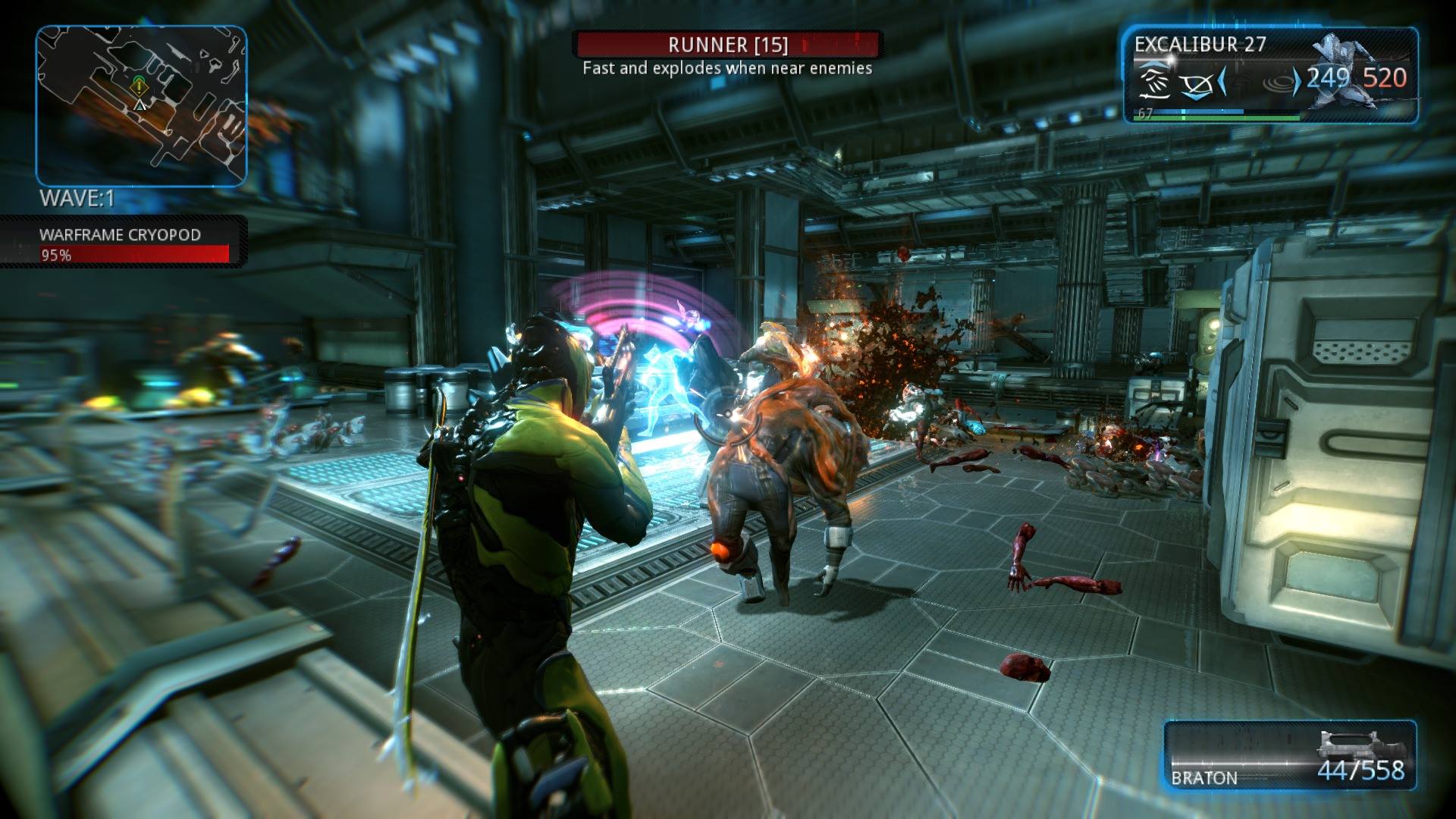 Warframe Â plays like an almost-finished-but-not-quite version ofÂ Mass Effect. Â It’s standard shooter fare in which a bunch of enemies crowd into a room and players must take them out. It’s the type of game that seems like it would be cover-based, but it isn’t. Players can duck behind objects in the environment, but it’s more of a defensive technique as they’ll have to be out in the open to deal damage (no blindfiring over the top of a box here).Â Warframe Â is more of a run and gun type game that grants players an unlimited sprint and the ability to jump really high and perform parkour moves off walls. That’s right: another shooter beatÂ Titanfall Â to the parkour game.

Warframe Â is also somewhat like a dungeon crawler with loot drops and whatnot. Various upgrades and items can be purchased with actual cash, but they are absolutely obtainable through simply playing the game as well. Enemies constantly drop loot, but some sections, especially boss fights, must be played multiple times in order to gain all the loot necessary to upgrade something. The best thingÂ Warframe Â has going for it is mods. Players can create mods for their Warframes by combining old upgrades to create new ones. It’s one ofÂ Warframe’s Â only fresh features, and it’s one I’d like to see implemented in future games.

Warframe Â can be played alone or with up to four players. The best way to experience it is with four willing participants. Levels move more quickly then, and some are even fun for a short while.Â Warframe Â has a healthy community. Tons of players were online during my very first play session, which is odd considering that the PS4 just launched a little under half a year ago. If you’re going to playÂ Warframe, Â definitely play it with other human beings. 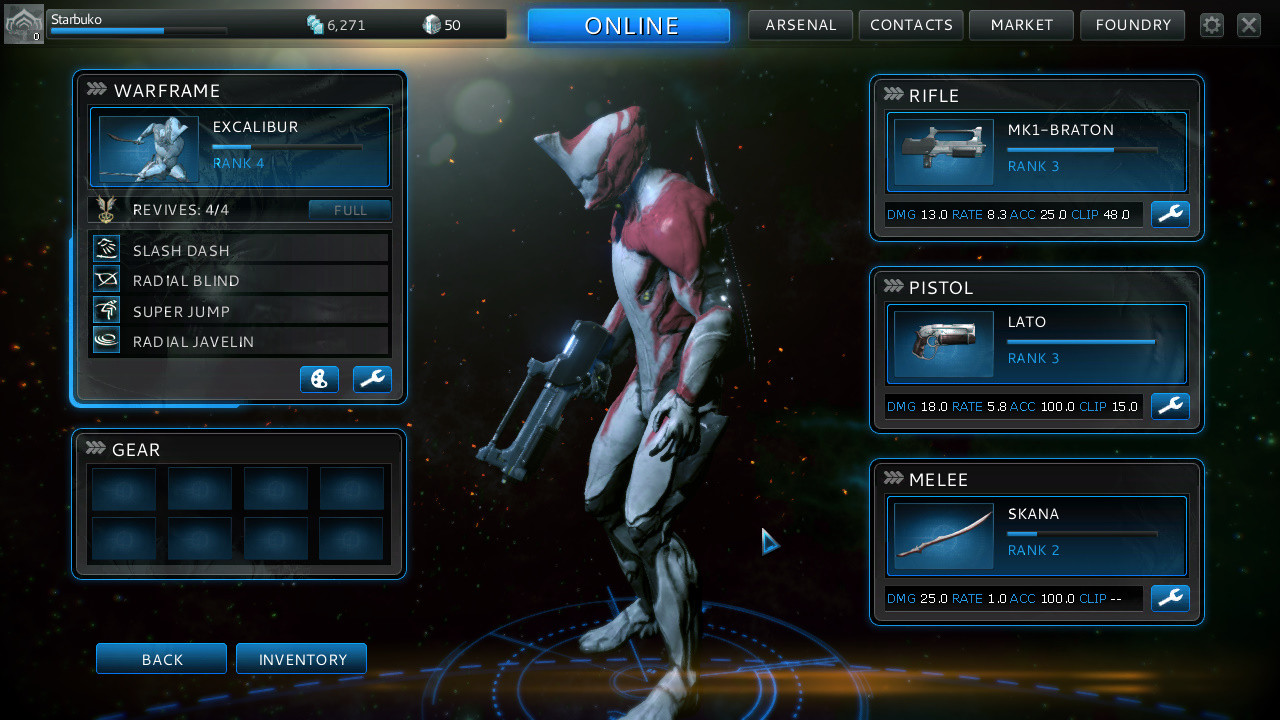 Warframe Â originally released on PC in March of last year and was ported to the PS4 in November, so we’re not exactly talking about a game that’s going to blow everyone away with its beauty. Still, I’ll take its consistent framerate any day over the numerous hiccups present in something like the PS4 version ofÂ Assassin’s Creed IV: Black Flag. Â Shame about the audio mixing inÂ Warframe, Â though. The voice acting is all kinds of cheesy and the actors sound like they’re talking through soup cans. The music inÂ Warframe Â hardly ever sounds like it belongs in any part ofÂ Warframe Â and instead comes across as a metallic assault on the eardrums. 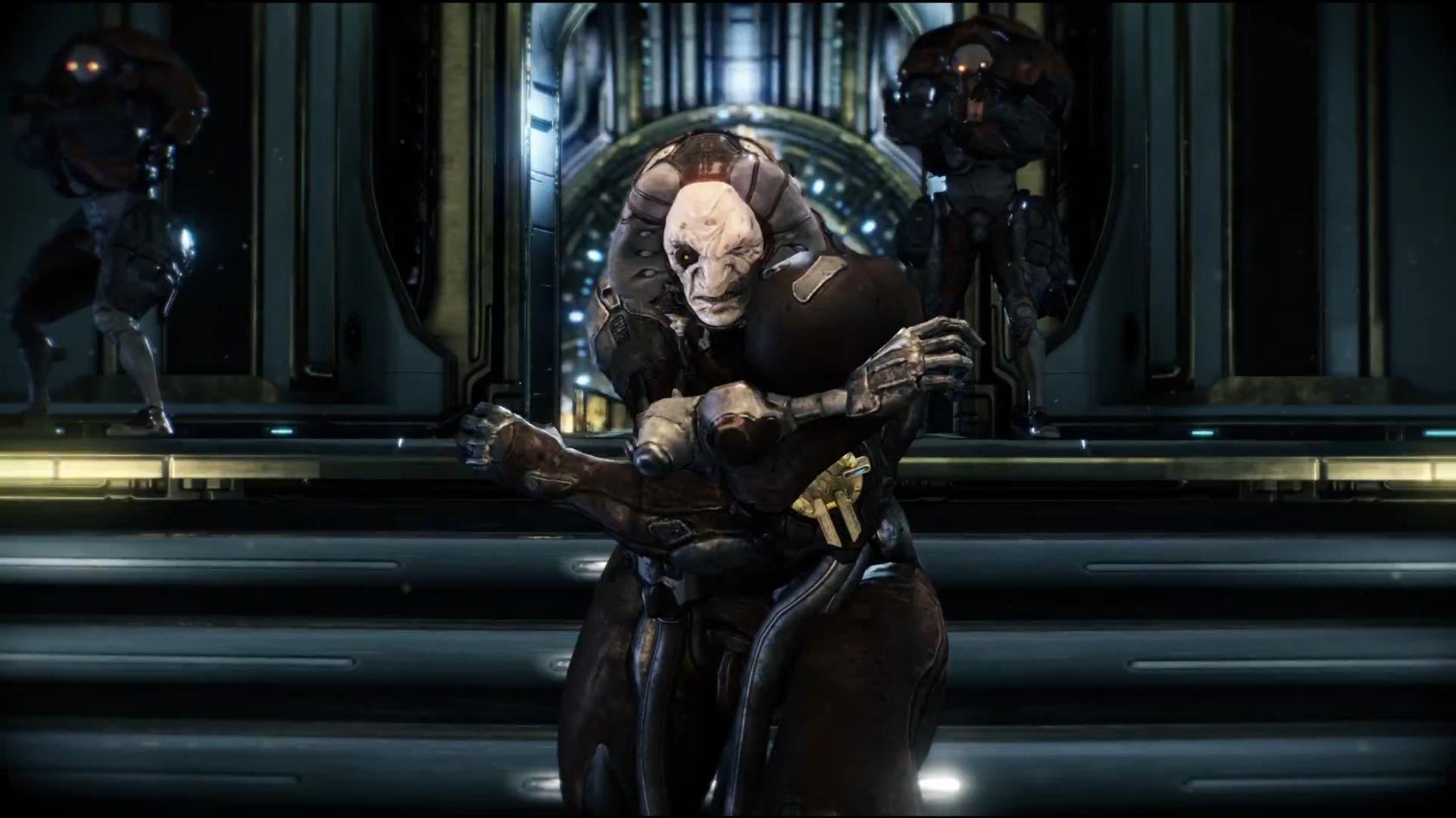 If you’re going to borrow fromÂ Mass Effect, Â make sure you borrow the right stuff.Â Warframe Â is obviously aÂ Mass Effect Â wannabe, but it gets so much wrong. Warframe Â features its own version of the Omni-Blade fromÂ Mass Effect Â in the form of a sword, but it sucks inÂ Warframe Â too, suffering from the same issue of rarely connecting with an enemy.Â The AI inÂ Warframe Â is really terrible; enemies will often just stand around and do nothing until they’re brought down. I can’t even count how many times I lined up a headshot on an enemy who just stayed in the middle of a room and allowed me to.Â Warframe Â is hardly ever challenging, but some shootouts can get chaotic and a few bosses actually put up a fight. Still, it’s not enough to make up for the overall blandness throughout.

Levels are designed in such a way that they become confusing labyrinths at times. It doesn’t help thatÂ Warframe Â sometimes forgets to display objective markers, leaving players without any clue as to what to do next. It also doesn’t help that in some levels players have to jump to higher floors and the parkour action feels like trying to climb a wall of banana peels with a riding lawnmower.Â Warframe Â can’t even manage to do things competently that games likeÂ Prince of Persia: The Sands of Time Â nailed over a decade ago.

Also, the user interface inÂ Warframe Â isÂ really bad. Â I loathed going into any menu in the game because they are all jumbled messes. I went out of way to avoid leveling up my character simply because I didn’t want my eyes to be assaulted by another uninviting screen. Even the level select screen inÂ Warframe Â is hideous with icons so small and so close together it’s difficult to tell what planet or galaxy you’re supposed to visit next. The UI inÂ Warframe Â seriouslyâ€”urgentlyâ€”needs an update.

WarframeÂ  may be a costless game, but I can’t think of a single person I would recommend it to. Way too many other free-to-play options exist to even bother with it. I would advise people to avoid it because of the UI alone, which really is dreadful. However, the gameplay itself is a buzzkill. If you plan on playingÂ Warframe, Â be sure to play it online with other people. You may be able to wring some enjoyment out of it. I did, but not nearly enough.

Features Editor Buddy was a journalism major at the University of Alabama. He now spends his days writing novels that will probably never get published and wishing he were an extra in an Anthony Hopkins film. He's been gaming since he can remember and has owned every console from the NES to the TurboGrafx-16 to, yes, even the Phillips CD-i. He loves all games, but his favorite genres are shooters and RPGs. His favorite game is The Legend of Zelda: Ocarina of Time.
You might also like
ascendassassins creedmass effect