The Wolf Among Us: Episode Four — In Sheep’s Clothing Review 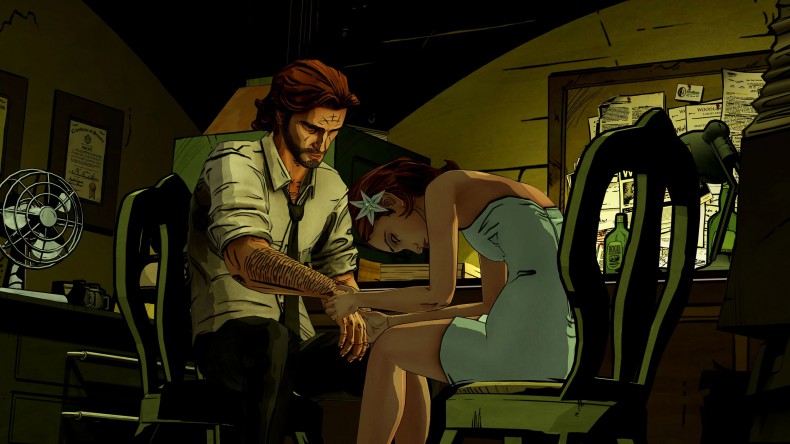 The Wolf Among Us: Episode Four — In Sheep's Clothing is the weakest episode of anything Telltale has put out in a while.

The Wolf Among Us: Episode Four — In Sheep’s Clothing  is disappointing. Bigby Wolf is drug even further into the corruption that pervades Fabletown as he attempts to find a way to stop the despicable crime boss called the Crooked Man. Bigby meets a few new characters along the way, digs deeper into relationships with familiar ones, and finally discovers the location of the Crooked Man’s lair. The ending of In Sheep’s Clothing  is fantastic and has me counting down the days until the final episode, Cry Wolf, is released.

But, man, I sure was left feeling cold by a lot of the fourth episode. I felt the sting of the pedestrian nature of it right from the start. After an intense opening that shows Bigby recovering from his confrontation with Bloody Mary that occurred at the end of A Crooked Mile, Snow White suddenly starts spouting nonsense. She starts chastising Bigby’s roomate, Colin (one of the Three Little Pigs), about not having a glamour (the spell Fables must undergo to take on a human appearance) done yet. Of all the things that should matter to Snow White at this point in the Wolf Among Us  narrative, whether or not a character has been glamoured should be at the bottom of the list. But then the episode keeps taking the path of least return. 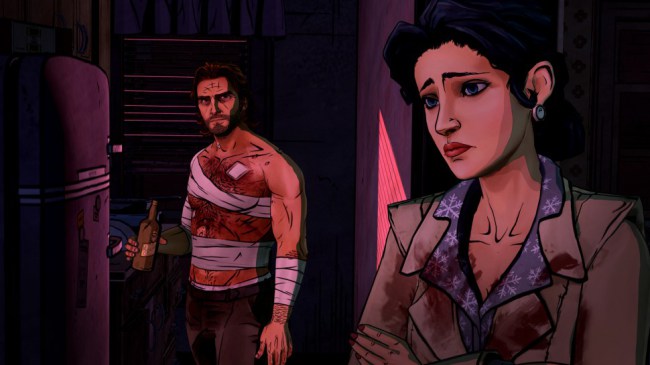 Then the characters of Beauty and Beast are completely ruined. Their relationship had been thoroughly explored in The Wolf Among Us  leading up to the latest episode and it was one of the most interesting things the game had going for it, but In Sheep’s Clothing  has them reverting back into vain nobodies. I was shaking my head when the scene was over. I’m afraid that scene, and I hope I’m wrong, may be the last big one featuring Beauty and Beast. At this point I was really bored and wanted to turn the game off, but REVIEW.

Fortunately things started looking up. The next stop in my journey had me inquiring at a pawn shop about the Woodsman’s axe, which Bloody Mary had somehow came into possession of (and then returned to the pawn shop for some reason). There Bigby comes into contact with the worst Wolf Among Us  character, Jack (from Jack and Jill), and is introduced to the owner of the pawn shop, Jersey, who just so happens to be the Jersey Devil. Things get heated and a big fight breaks out, and I was treated to the best action sequence in The Wolf Among Us  so far. It’s brief, brutal, and drives home the point that Bigby is sick of putting up with bull****.

How does this awesome moment begin? Bigby asks Mr. Toad if he’s been glamoured yet. Huh? What is up with the inane obsession with characters getting glamours in this episode? Surely these people can find better uses of their time like, I don’t know, investigating a MURDERER. Instead they’re focusing on whether or not fairytale creatures look like humans.

I thought the episode couldn’t get anymore inconsequential, but then I visited the butcher shop. It’s operated by a man named Johann, who is the butcher mentioned in the well-known tale about the butcher, the baker, and the candlestick maker. I was intrigued just like I am when I meet any new Fable in The Wolf Among Us, but then Bigby spends what feels like an eternity talking to him and I discovered he’s actually very boring. The conversation is a set-up for a big moment in the back of the butcher shop, but it still feels pointless. It felt as unimportant as the rest of the episode had. 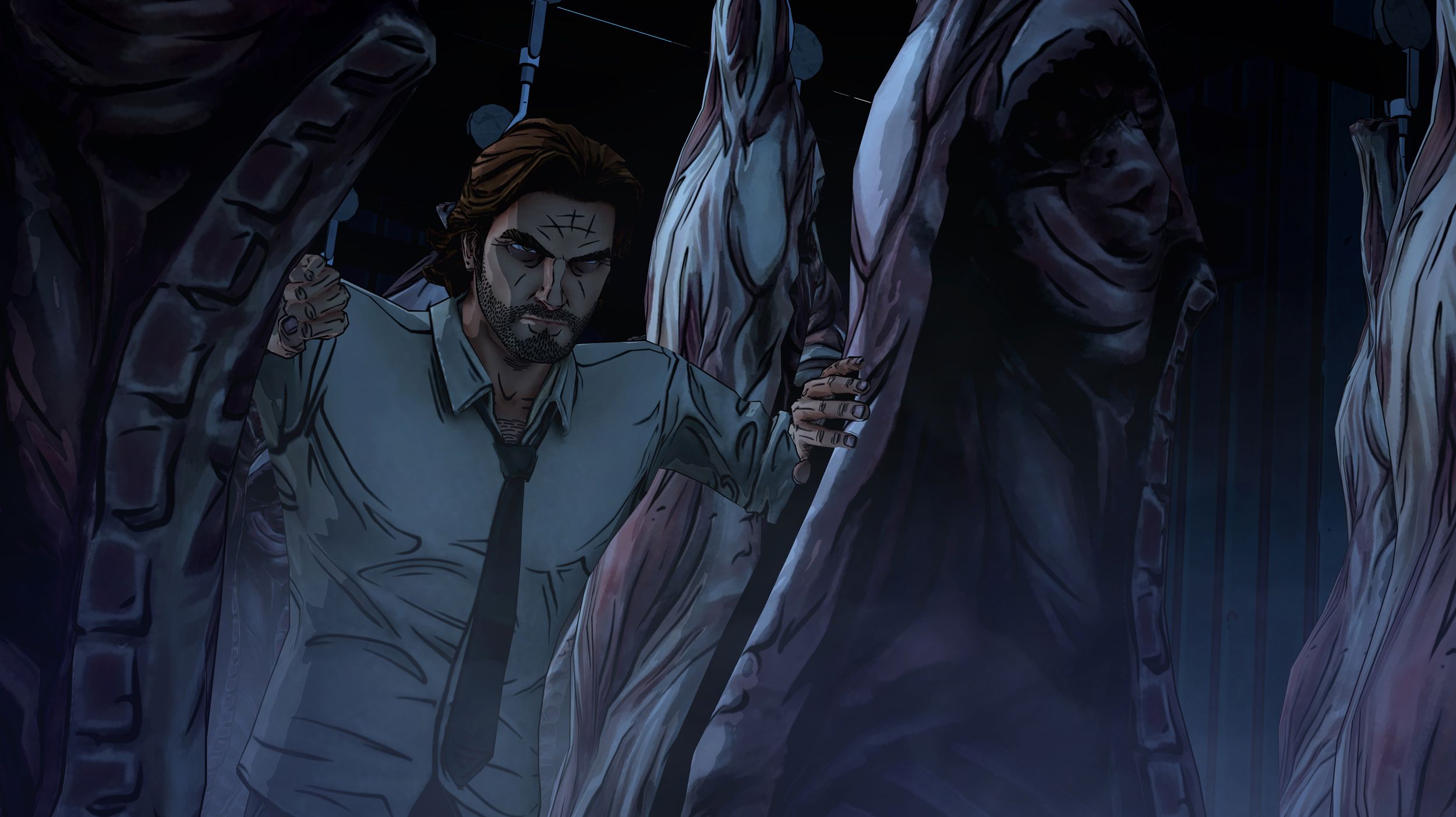 Then Bigby finally discovers where the Crooked Man is located and the episode picks back up again. He meets the Crooked Man’s assitant, Tiny Tim, and then finally the Crooked Man himself. I could feel the brilliance that has existed elsewhere in The Wolf Among Us  start to creep back into In Sheep’s Clothing. Then, in a flash, it’s all over. I was left wanting more, but now I’ll have to wait a few months. Maybe the mediocrity of In Sheep’s Clothing  will have faded from my memory by then. I look forward to seeing the conclusion Telltale has in store.

I look at Telltale’s games in the same way I would a TV show. Telltale puts out wonderful entertainment products, but some individual components are better than others, as in any great TV show. In Sheep’s Clothing  is the weakest episode of anything Telltale has put out in a while. Despite that, The Wolf Among Us  is still a great show…ahem, game. I hope the finale kicks some serious a**.

Features Editor Buddy was a journalism major at the University of Alabama. He now spends his days writing novels that will probably never get published and wishing he were an extra in an Anthony Hopkins film. He's been gaming since he can remember and has owned every console from the NES to the TurboGrafx-16 to, yes, even the Phillips CD-i. He loves all games, but his favorite genres are shooters and RPGs. His favorite game is The Legend of Zelda: Ocarina of Time.
You might also like
a crooked mileCry WolfIn Sheep's Clothing