The Wolf Among Us: Episode One – Faith Review 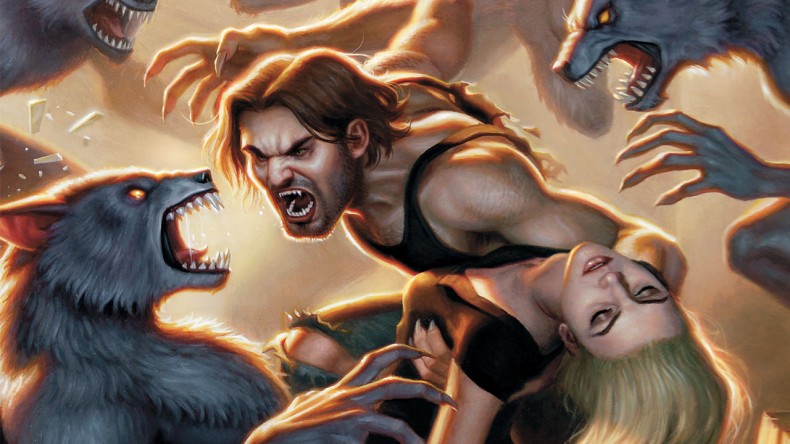 It's filled with interesting characters, intense situations and lively dialogue; The gameplay is fast-paced and exciting; The noir soundtrack and comic book art style are both fantastic

It hasn't proven itself to be at the same level of quality as The Walking Dead yet; It takes way too long to load sometimes; The 360 version freezes a lot

The Wolf Among Us is off to a great start with Faith. I'm intriguedâ€”no, excitedâ€”to see where Telltale takes the story from here. Time will tell if The Wolf Among Us can live up to its predecessor. It's going to be a challenge, but it's a goal that Telltale is more than capable of achieving. They hasn't steered me wrong before, and I don't expect them to now.

Telltale Games brought the graphic adventure back into relevancy last year with theÂ The Walking Dead. Â The Walking Dead Â was a perfect marriage of gameplay and narrative, so much so that everyone started ignoring the fact that the game in its entirety was nothing more than a bunch of quicktime events. It didn’t matter because the story was so good it made those quicktime events more enjoyable, or at least more tolerable. I lovedÂ The Walking Dead, Â naming it one of my favorite games of last year, so I was really excited when I heard Telltale would be taking on theÂ FablesÂ comic book series in the form ofÂ The Wolf Among Us. Â Well, the first part ofÂ The Wolf Among Us, Â Faith, Â has arrived, and it’s a great start to what is sure to be another Telltale masterpiece. 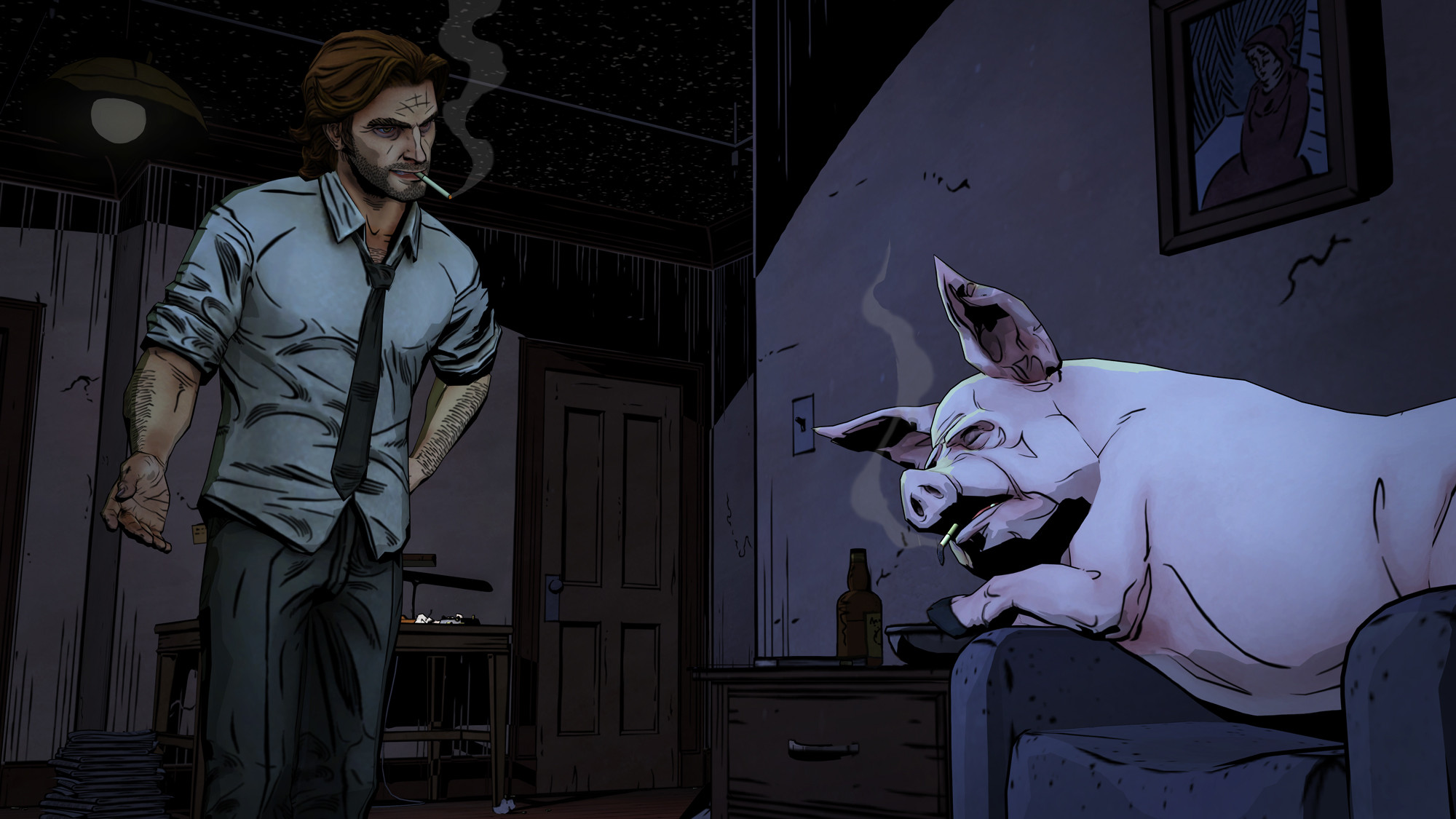 That’s me on the right.

The Wolf Among Us Â centers on Bigby Wolf, a sheriff of a fictional area of Manhattan called “Fabletown”. Fabletown is home to a large number of fairy tale personas (called “fables”), including Snow White, Ichabod Crane and Mr. Toad. Bigby himself is the infamous Big Bad Wolf who went through a process known as “glamouring” in order to make himself appear human. A lot of the denizens of Fabletown paid for this service, but the ones who can’t afford it or aren’t affected by it are sent to live on “The Farm”, which is kind of like a prison disguised as an ideal “home away from home”.

Anyhow, in the first episode a fable is murdered, and Bigby is on the case! He’s tasked with questioning other fables about where they were on the night of the murder, what they might have seen, etc., and he just might have to use force. His alter ego may or may not make an appearance, but I won’t spoil anything. I don’t want to spoil anything about this story, which may sound nonsensical, but isn’t actually thanks to Bill Willingham, the creator ofÂ Fables, Â who made sure everything about theÂ Fables Â world was interesting in his ingenious comics. The game has captured that interesting nature perfectly.Â Faith Â is captivating from its shocking start to its REALLY shocking conclusion. 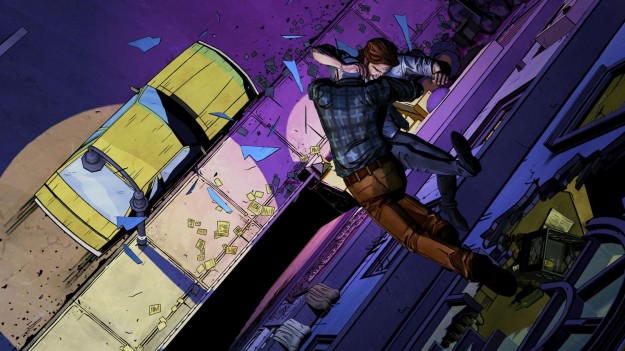 This is what happens when you insult James Spader in my presence.

Folks who are familiar withÂ The Walking Dead Â might be surprised by how fast-paced the gameplay inÂ The Wolf Among Us Â is. It’s still mostly quicktime events, but the button prompts appear a lot more quickly than they did in Telltale’s last effort. Some of them gave me literally one second to respond, and I usually failed to do so. As a result of the briskness, the combat inÂ The Wolf Among Us Â is more exciting than it was inÂ The Walking Dead, Â but that doesn’t mean it’s necessarily “better”. What fits in here probably wouldn’t have fit in there, so to speak.

When Bigby interrogates or speaks to Fabletown’s residents,Â The Wolf Among Us Â relies on the same sort of choice-driven gameplay asÂ The Walking Dead. Â Dialogue options appear in the form of button prompts, and it’s up to the player to choose how they wish to respond. Some of the responses can alter certain parts of the story, but none of them really make a difference in the grand scheme of things. Choices are still not really choices in video games, but it’s cool to see developers like Telltale Games and BioWare attempting to make games feel more personal.Â The Walking DeadÂ  and, so far, Â The Wolf Among UsÂ are both about as personal as it gets in the gaming world. 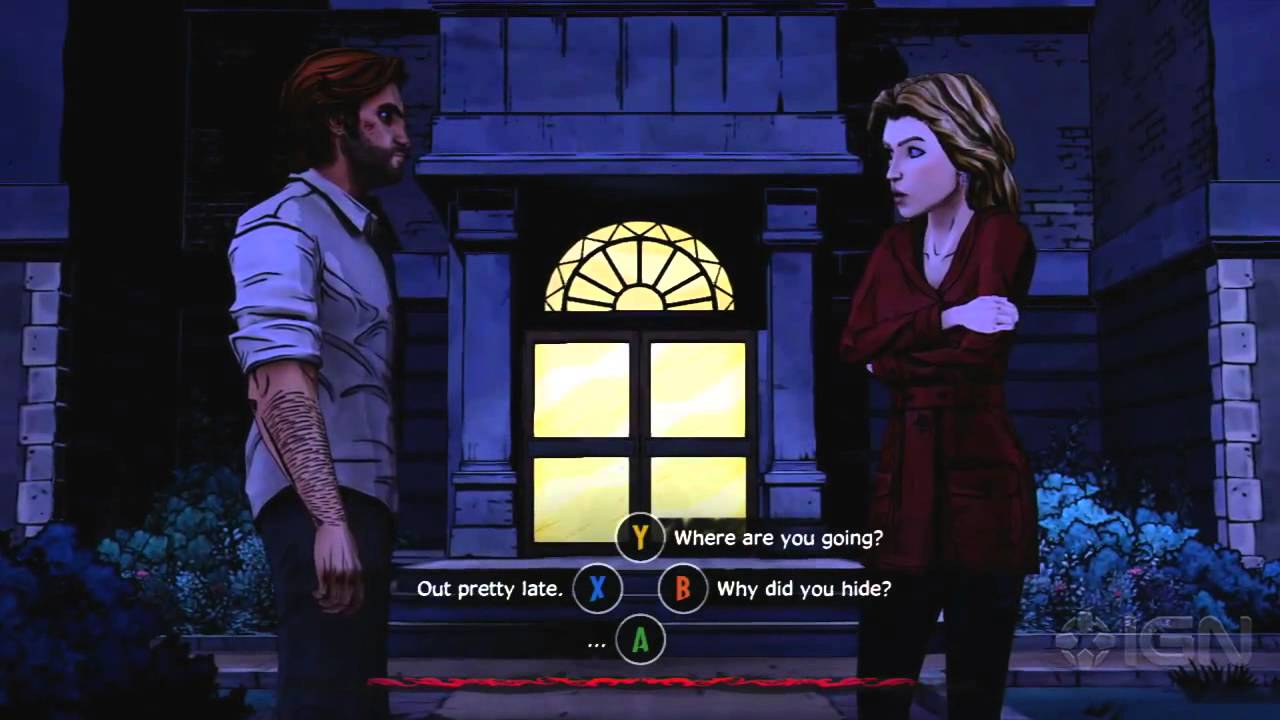 I chose “Why did you hide?”

The Wolf Among UsÂ  looks like a lot likeÂ The Walking Dead, Â but with more neon and noir. The art style is beautiful and really does take on the appearance of a comic book in motion. Cel shading is often used to mask graphical shortcomings in games, as it was inÂ Killer Is Dead,Â  but it looks great in games likeÂ Borderlands Â andÂ The Legend of Zelda: The Wind Waker, Â and it looks great inÂ The Wolf Among Us. Â The soundtrack is fantastic as well, nailing that noir vibe, and the voice acting is superb across the board. 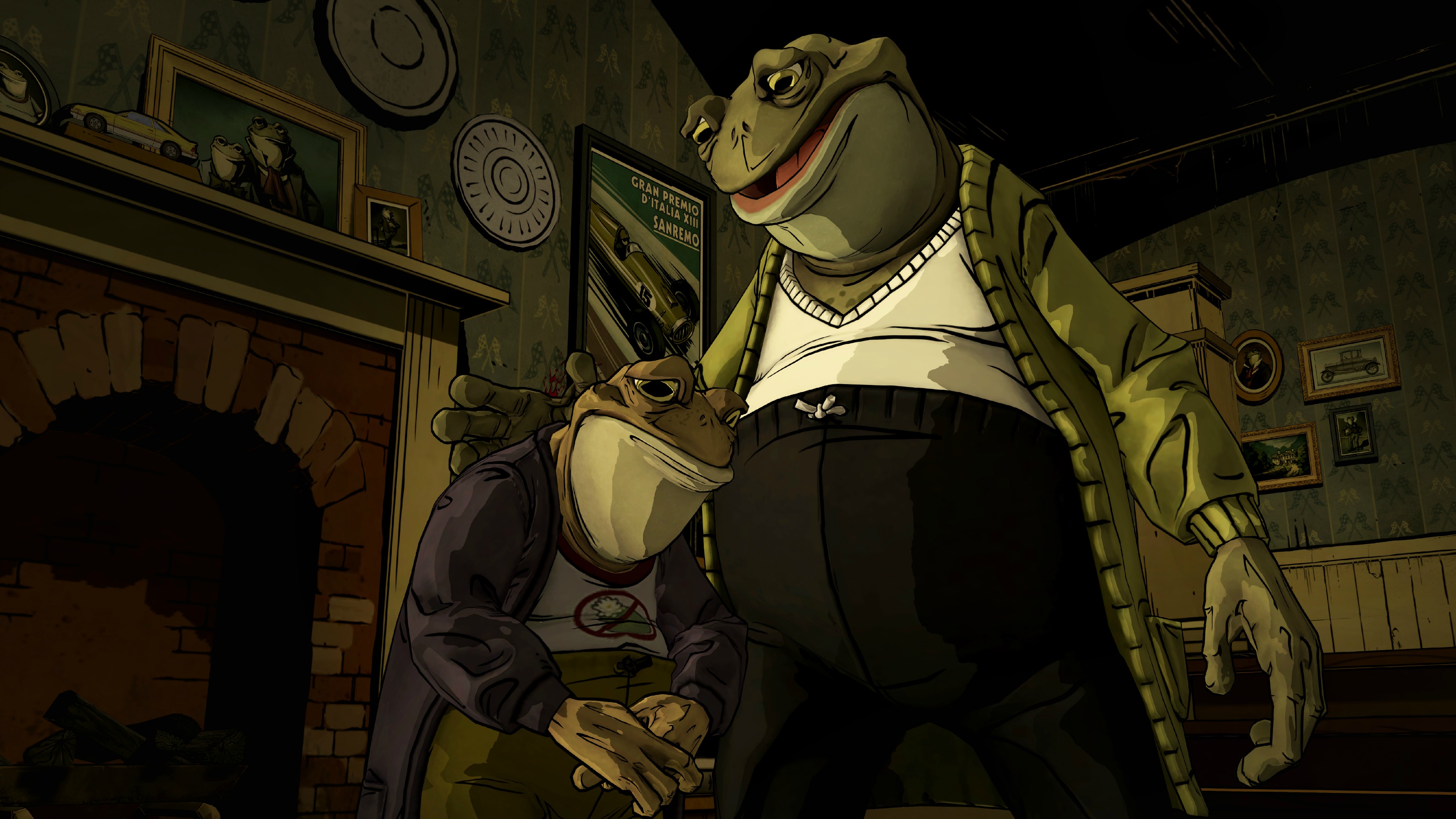 It’s too short! OK, the length is not really an issue as I was expecting it to be short, and it’s also only $5. It’s just that I didn’t want it to end. My only concerns withÂ The Wolf Among Us Â is that it hasn’t proven itself to be at the same level of quality asÂ The Walking Dead Â yet. I knowÂ FaithÂ  is only a fifth of the entire game, but the writing inÂ A New Day, Â the first episode ofÂ The Walking Dead, Â was better. Bigby is also not quite as deep a character as Lee was, not yet, and after the jaw-dropping ending ofÂ Faith Â Telltale is really going to have to pull some punches to keep the momentum going.

Loading screens slow down the action at times. In some instances scenes take upwards of 20 seconds to load, which is kind of a drag. Also, the 360 version, which is the version I played, freezes constantly during scenes. It’s annoying, but Telltale will more than likely release a patch soon that gets rid of that and other issues. Still, it’s a problem right now. 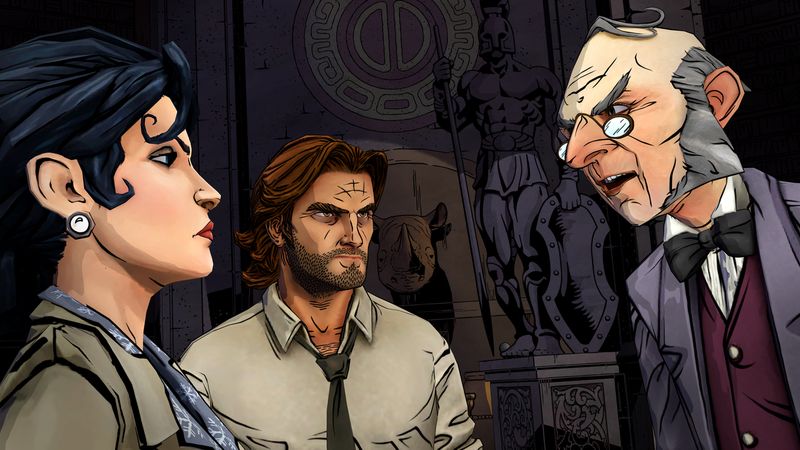 “My nose DOES NOT look like the Great Pyramid of Giza!”

Â The Wolf Among Us Â is off to a great start withÂ Faith. Â I’m intriguedâ€”no, excitedâ€”to see where Telltale takes the story from here. Time will tell ifÂ The Wolf Among Us Â can live up to its predecessor. It’s going to be a challenge, but it’s a goal that Telltale is more than capable of achieving.Â They haven’t steered me wrong before, and I don’t expect them to now.

Features Editor Buddy was a journalism major at the University of Alabama. He now spends his days writing novels that will probably never get published and wishing he were an extra in an Anthony Hopkins film. He's been gaming since he can remember and has owned every console from the NES to the TurboGrafx-16 to, yes, even the Phillips CD-i. He loves all games, but his favorite genres are shooters and RPGs. His favorite game is The Legend of Zelda: Ocarina of Time.
You might also like
BorderlandsKiller is Deadtelltale