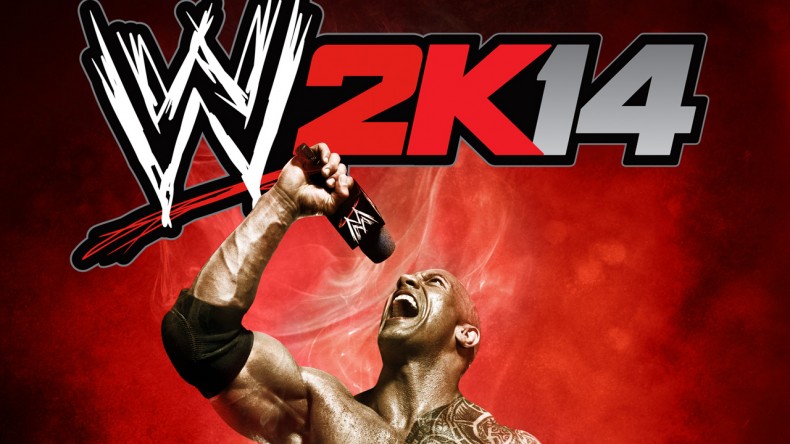 It's packed with a ton of content; 30 Years of WrestleMania is a fun trip down memory lane; WWE Universe is as good as it's ever been; The in-ring action is still enjoyable despite not having changed that much

A feeling of "been there, done that" is starting to creep into the series again; The visuals and sound design need a makeover

So much content exists in WWE 2K14 for wrestling fans. It's a shame, then, that the basic underlying formula is already starting to feel dated. Yuke's will hopefully move the main mode in a new direction next year and stop relying on nostalgia to get by. 30 Years of WrestleMania is neat, but I've had quite enough of wrestling history for now.

Fans of professional wrestling know what to expect from games that emulate the sport. They’re either going to get a product that sets the standard for years to come, like WWF No MercyÂ  (the best pro wrestling game ever created) or WWE SmackDown!: Here Comes the Pain, Â or they’re going to get “just another wrestling game”. Every game following Here Comes the PainÂ  fell into the trap of being “just another wrestling game”, or they at least felt that way because of their content. Yuke’s set out to change that with WWE ’12,Â  and while they did succeed in making the in-ring action feel new again, the game was ultimately a failure due to its awful Road to WrestleMania mode. So Yuke’s made a smart move with last year’s WWE ’13, delivering the nostalgia-fueled Attitude Era mode, which injected some much needed life into the series and made it feel fresh again. They set out to deliver pretty much the same experience with WWE 2K14,Â  and while it may feel like “just another wrestling game” after its predecessor, it is, as WWE COO Triple H would put it, “what’s best for business” at the end of this console generation. 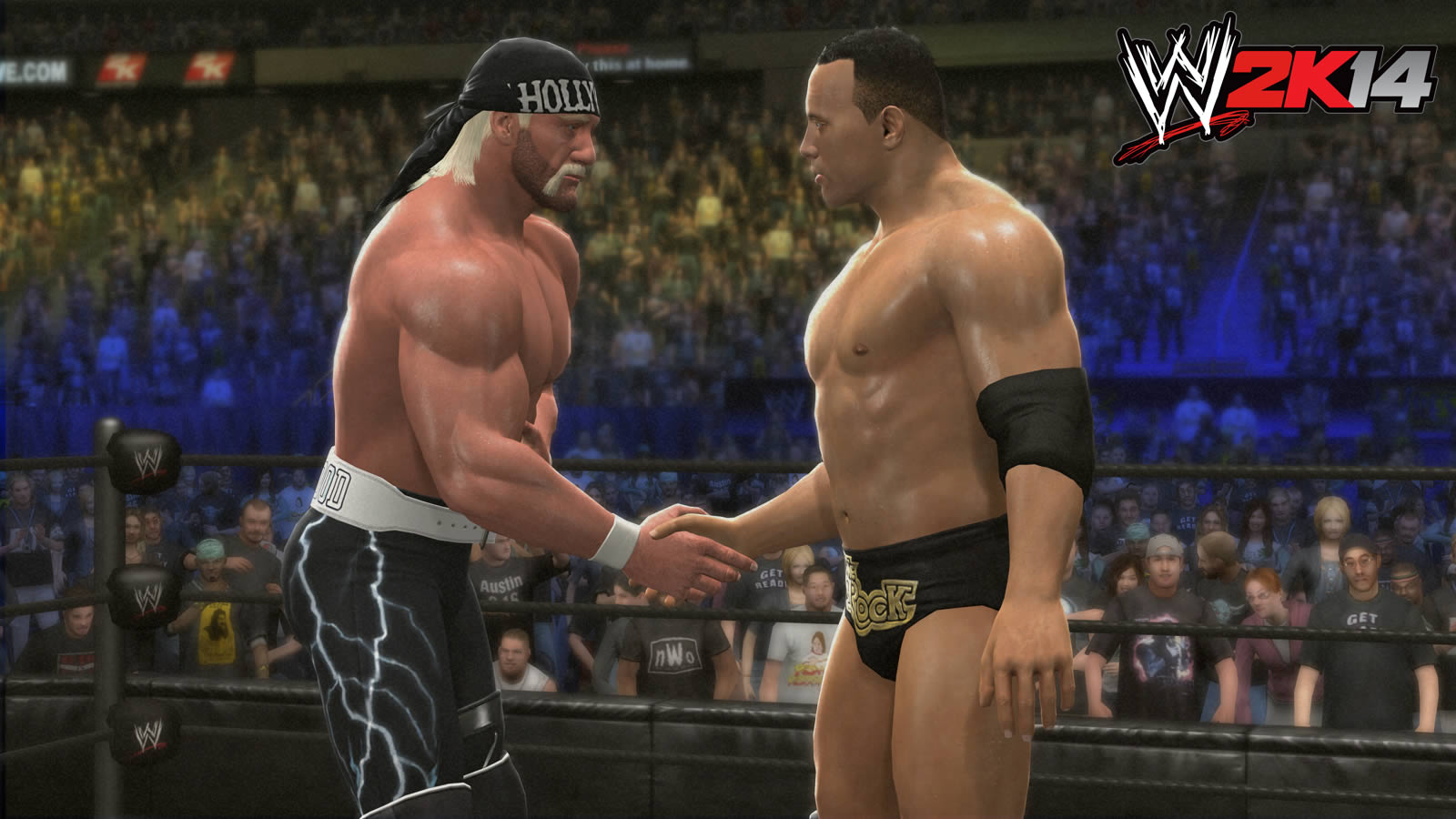 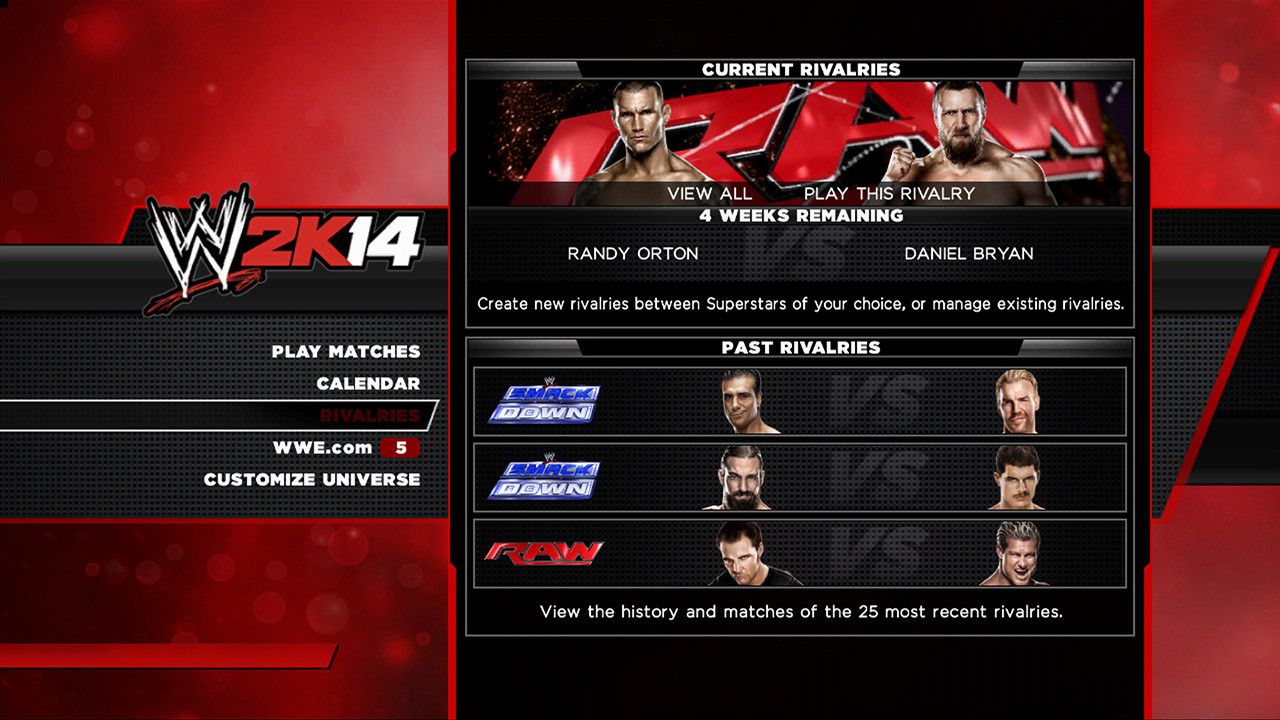 To further prove it’s just borrowing from WWE ’13,Â  30 Years of WrestleMania requires players to complete certain objectives in order to advance. Sometimes that means just finishing a match. Sometimes players will have to do one thing to unlock another thing. And sometimes players will have to trigger “WrestleMania Moments”, which are mid-match scenes that rely on quicktime events to recreate moments from the actual matches WWE 2K14 Â is attempting to imitate. Completing all of these objectives for every match will award you with various rewards as well as achievements/trophies.

The in-ring action hasn’t really changed all that much, either (it hasn’t really changed since the SmackDown! vs. RAWÂ  games). You still use one button to strike, one button for signature moves and finishing maneuvers and one button and the right analog stick to initiate grapples. It’s a control scheme that Yuke’s has relied on for years, and it’s a pretty good one. It’s a scheme far removed from the one in, say, WWF Attitude,Â  which is just a mess by today’s standards. Yuke’s will rely on it again in future installments, as they should.

Some additions have been tossed into the mix, though. “Catch” finishers have been implemented this year, which allow players to perform finishing maneuvers on opponents who are in midair or rebounding off the ring ropes. Two-man moves have also been added, which are moves that can be used against two opponents simultaneously. The counter system has been somewhat improved, but still demands precision. Most of the gameplay improvements are small and won’t be noticed by a lot of folks, but they are there. 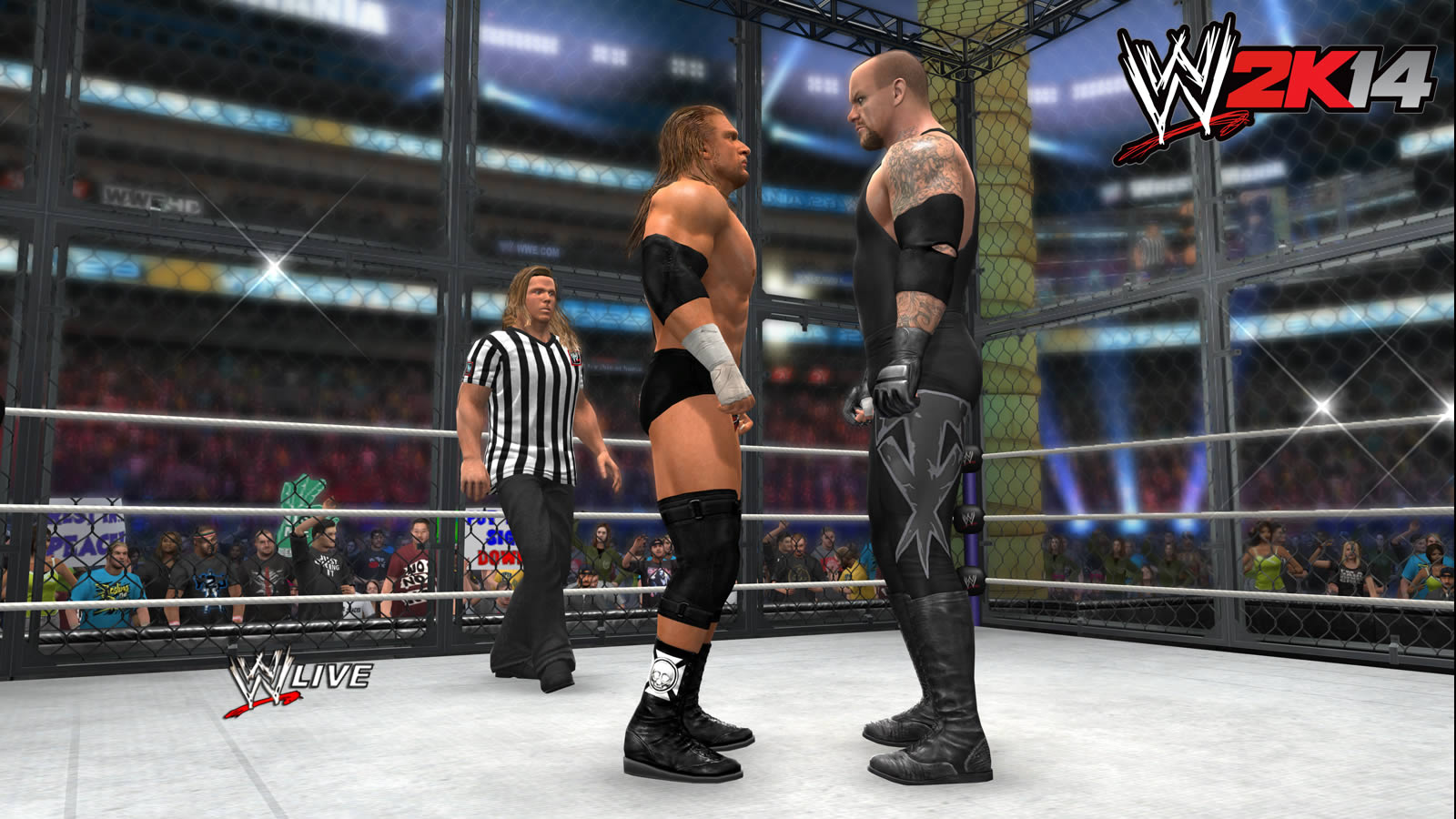 WWE 2K14Â  looks exactly like WWE ’13,Â  which looked exactly like WWE ’12. Â The visuals haven’t changed in the slightest, but at least some of the more bothersome graphical issues have been ironed out. The opponent AI no longer hovers over the ring, which was just hilarious every time it happened in the past. Gone are the annoying “broken finishers”, which were a phenomenon involving an opponent glitching out of a finishing maneuver, but still collapsing to the mat as if the move had been performed successfully. As a matter of fact, most of the glitches are gone, but not all of them. For example, the opponent AI still runs around in circles outside the ring sometimes before getting back in the ring.

As I pointed out, the visuals haven’t improved any, and Yuke’s really needs to step up their game with the next version of their “Predator Technology” or they need to ditch that engine entirely and invent a new one. A lot of the character animations look silly, especially facial animations. Ryback yelling during his entrance is a frightening sight in the game. The crowd is still just stupid-looking, as it has been for the past several games, and behaves nothing like an actual crowd at a professional wrestling event. The menus are deceptive, depicting the wrestlers in a way that makes them look like their real-life counterparts. Once the menus are gone the truth is obvious: these visuals need an update.

So do the announcers. The exact same sound files from the past few games have been recycled and are present again in WWE 2K14.Â  The announcers, mainly Jerry Lawler and Jim Ross (who recently retired), repeat the same lines ad nauseam. I’ve grown weary of performing a Pedigree with Triple H only to hear Jim Ross say, “What a…powerbomb!” The words “textbook suplex” are repeated so often I expect to hear them every time I perform a suplex in a WWE game. It’s, like, record some new dialogue already, people.

It’s not all bad. Most of the dialogue in 30 Years of WrestleMania is new, though it’s not really because it’s just lines that were used during the actual matches. It’s strange to hear Lawler and Ross saying some of these lines when they weren’t even present at the announcers’ table for a lot of the matches, but it’s also understandable (Gorilla Monsoon passed away in 1999, and Bobby Heenan probably couldn’t do video game voiceover work to save his life). This year the menus feature a lot more entrance themes, so at least the sound there doesn’t get repetitive as quickly as it has in the past. I don’t like using the words “mixed bag”, but that really is the perfect description for the sound design of recent WWE games. 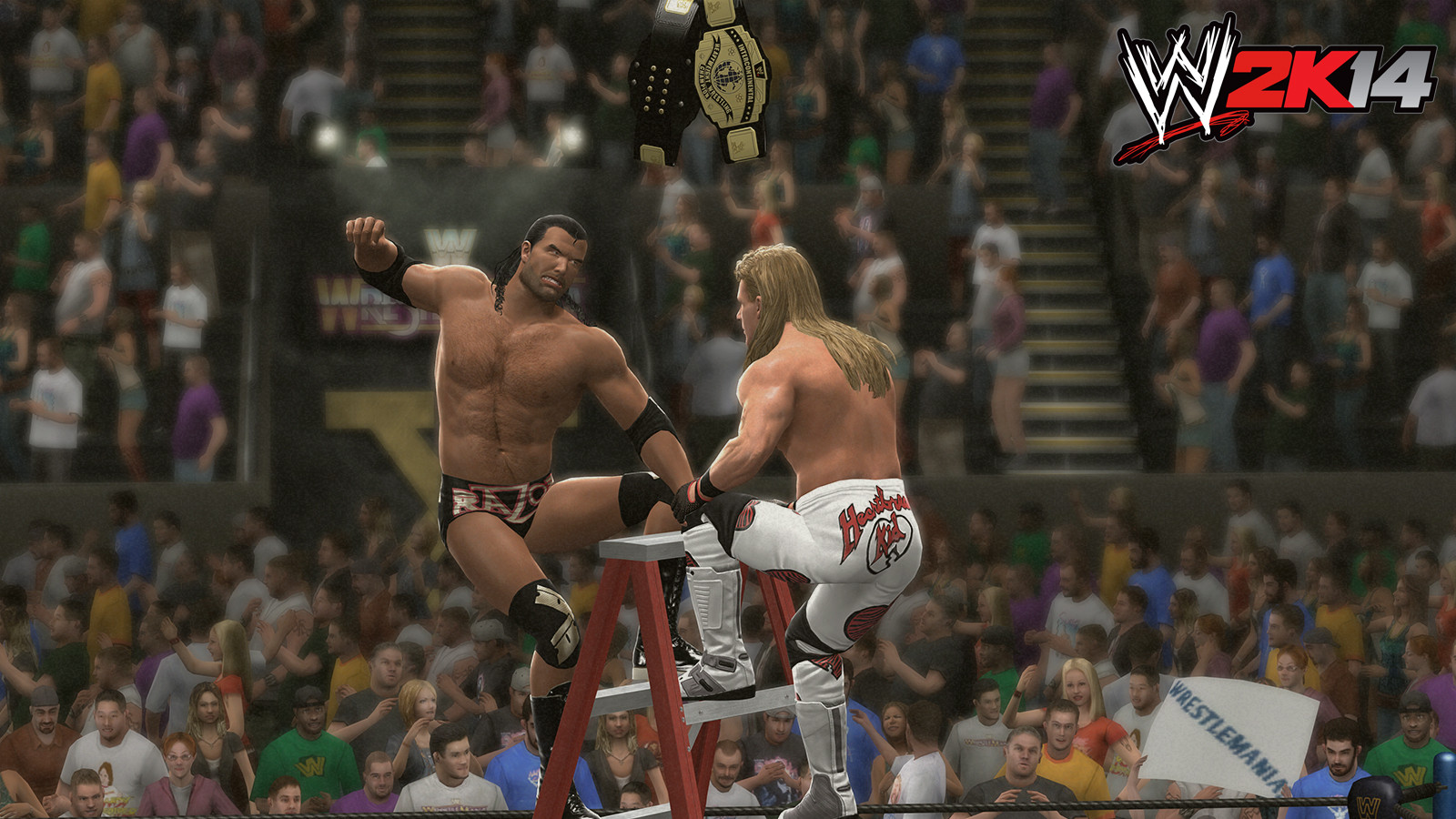 The WWE Universe mode returns for a third appearance in WWE 2K14,Â  and it’s better than it has ever been. Players can now dictate and control rivalries and change the superstars and length of the rivalries. King of the Ring tournaments have been added and can be booked during pay-per-view events. WWE Universe still becomes mind-numbingly dull after only a short period of time, but it’s endlessly replayable, meaning players can return to it months later. It’s nice to still have something to dabble in after everything else has worn out its welcome.

The content doesn’t stop there. Yuke’s has also added a “Streak” mode this year. This comes with two options: Defend the Streak and Defeat the Streak. In Defend the Streak, players must play as The Undertaker and attempt to defeat as many superstars in a row as they can, making it similar to the Slobber Knocker matches from the older games (defeating a certain amount of superstars actually unlocks the Slobber Knocker match in WWE 2K14).Â  In Defeat the Streak, players are given the opportunity to end The Undertaker’s WrestleMania undefeated streak with the superstar of their choosing. Don’t expect a cakewalk, though; Defeat the Streak is the biggest challenge of WWE 2K14.Â  In it The Undertaker can take several finishers and still kick out, and can counter most moves (I beat his ass several times).

And of course a ton of creativity is still permitted in WWE 2K14.Â  Each of the creative modes come packed with a ton of content, and extra stuff has been added this year. More items have been added to Create-A-Superstar. More options have been added to Create-A-Story. The WWE games continue to provide the best creative suite imaginable of any game. Sometimes it feels like too much content has been placed in the hands of players, which is pretty cool. 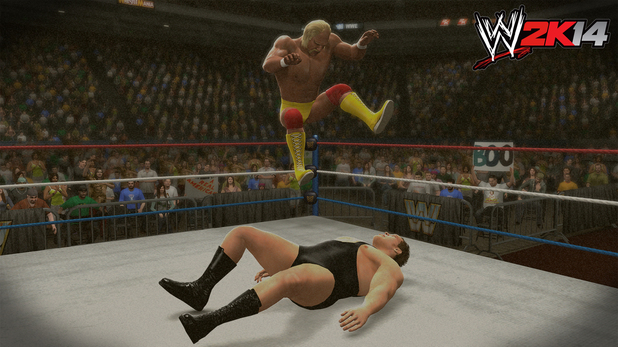 So much content exists in WWE 2K14Â  for wrestling fans. It’s a shame, then, that the basic underlying formula is already starting to feel dated. Yuke’s will hopefully move the main mode in a new direction next year and stop relying on nostalgia to get by. 30 Years of WrestleMania is neat, but I’ve had quite enough of wrestling history for now. As a wrestling fan, I’m not ashamed to admit I look forward to the release of each and every WWE game. I’m excited to see what 2K Sports can do with these games in a new console generation. I’ll be counting the days until WWE 2K15.

Features Editor Buddy was a journalism major at the University of Alabama. He now spends his days writing novels that will probably never get published and wishing he were an extra in an Anthony Hopkins film. He's been gaming since he can remember and has owned every console from the NES to the TurboGrafx-16 to, yes, even the Phillips CD-i. He loves all games, but his favorite genres are shooters and RPGs. His favorite game is The Legend of Zelda: Ocarina of Time.
You might also like
wweWWE 2K14