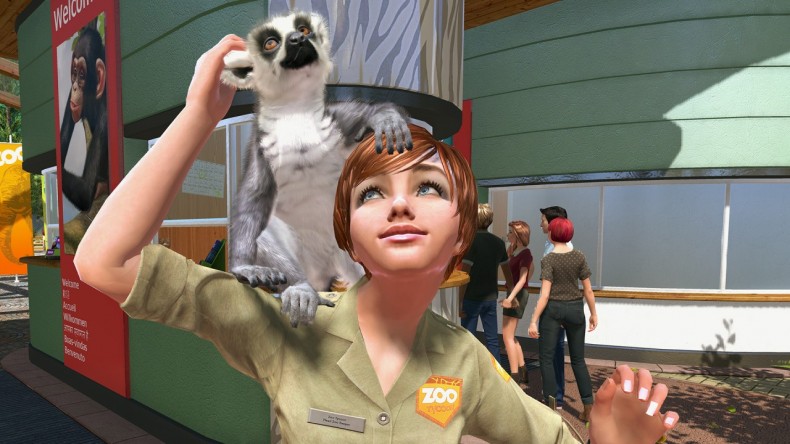 Building and managing zoos in Zoo Tycoon is as enjoyable a task as it's ever been; Being able to explore your zoo on foot is pretty cool; The animals all behave realistically and some of them are super duper cute

It's not very deep; It's very glitchy; You can't fill up the map the game offers, which is a letdown; The $50 price tag is misguided

Zoo Tycoon is enjoyable and well worth playing, but it's not very deep.

I Am the Poop Master

The original Zoo TycoonÂ  wasn’t all that good. It was OK, but it was lacking a bit in the creativity department. The sequel was worse. Still, both games managed to garner a pretty big fan base. I wonder, then, if those same folks will get behind the new Zoo Tycoon.Â  If they play it expecting it to be the same old same old they’re likely to be disappointed; the changes in the reboot are quite noticeable. Not that that’s a bad thing. As a matter of fact, that’s a very good thing. The concept behind Zoo TycoonÂ  is a simple one. You build a zoo, fill it with animals and run it. You try to make money, and you try to keep your visitors/customers happy. It’s a straightforward game of interactivity and creativeness. It was refreshing for me to play a product of such pure aspiration after rolling my eyes many times at a lot of stupid stories in other games this year. This Zoo TycoonÂ  is a lot like the original two in a lot of ways. You’ll still be placing habitats for animals to live in and making sure you place the right types of animals in those habitats. Then you have to place certain items in the habitats to keep the animals happy. For example, bears and lions like scratching posts, so it’s probably a good idea to put a scratching post in their habitats. You have to place the right kind of food in each habitat, and you have to make sure the animals stay clean by installing washing stations or a hose, which requires some manual labor. Oh, and get ready to clean up a lot of poop.

Some animals, such as tigers and monkeys, like playing, so you can install an “enrichment interaction” in their habitats, which is simply a glass panel they can see you through. If you interact with the glass panel then one of the animals will wander over to you and you can play with them by making faces and whatnot. In the 360 version interacting with the glass panel leads to a series of quicktime events. I usually dislike quicktime events, but they aren’t intrusive in Zoo Tycoon,Â  and they’re enjoyable because of how natural they feel.

Ignore the animals at your own risk. Failing to keep animals happy will lead to a loss in profits, a decline in visitors to your zoo and it could even lead to your animals being confiscated by a higher power. I cringed as I fought to cure an ill elephant only to have a helicopter swoop in and take it away. Keeping animals satisfied will lead to them leveling up, and once they reach a certain level they can be released into the wild. Early on your zoo will require quite a bit of legwork, but as your profits increase you can also hire zookeepers and janitors to keep things under control. It is possible to get to a point in Zoo TycoonÂ  where you can literally stand around and do almost nothing, but it takes time.

The people who visit your zoo are just as important as the animals in Zoo Tycoon.Â  If they aren’t happy, they aren’t going to stick around. They want to be entertained. They want to see all kinds of animals. They want a clean environment and areas to relax in. They want concessions and restrooms. Refusing to cater to your visitors’ demands will cost you in the long run.

Being able to explore your zoo from a third-person perspective is a welcome addition that the series has been sorely lacking. You still have the choice of running your zoo from an overhead view, but where’s the fun in that? Besides, walking around and taking in the sights will give you the sense that your zoo really is the closest thing to a real zoo ever offered in a game. However, it’s up to you, and that at the end of the day is the coolest part. Zoo TycoonÂ  somehow manages to be both gorgeous and visually unimpressive. Everything looks lively from a distance. It’s easy to get caught up in simply watching the animals move about and interact with one another. A lot of the animals, especially the baby tigers, are so, so cute, which isn’t a big surprise considering that Zoo TycoonÂ  was developed by Frontier Developments, the studio behind the solid Kinectimals. Â Zoo Tycoon Â melted my cold heart on more than one occasion.

The crowd that grows as your zoo grows is extremely lifelike. I walked by a little boy who proclaimed, “Cool!” while looking at some giraffes, which is exactly what a real little boy would say while looking at giraffes. I overheard a young woman crying out and then saying, “OMG, that lion scared me so much!” Dialogue is hardly a big deal in a game like Zoo Tycoon,Â  but it somehow added something to the overall experience and made it feel more authentic.

However, Zoo TycoonÂ  is really glitchy. Oftentimes when feeding, for example, an elephant, the item you select to give to the elephant will clip through your hand. Sometimes the item will disappear entirely and then reappear in your palm. Textures are constantly vanishing from surfaces in the game, causing them to look like misshapen piles of clay for several seconds. Also, the character models look a little stupid. They’re obviously meant to be exaggerated, but they don’t really fit in a game that’s striving to provide a realistic simulation in every other way. On that note, what the heck is up with that buggy just randomly flying onscreen when you whistle for it?! Zoo TycoonÂ  has a few modes, but it doesn’t shake things up too much on the gameplay front. The main offering that will feel most familiar toÂ Zoo Tycoon Â veterans (and the one I based the majority of this review on) is Freeform Mode, which is the simple “build a zoo and then run it” mode. Challenge Mode is a mode filled with tasks lasting about 15 minutes that are pretty difficult to complete to begin with. Campaign Mode is a collection of 20 zoos that must be modified so they meet certain requirements. As I said, Zoo TycoonÂ  plays and feels exactly the same in every mode, but it does at least attempt to offer something extra for gamers who are willing to run more than one zoo at a time. 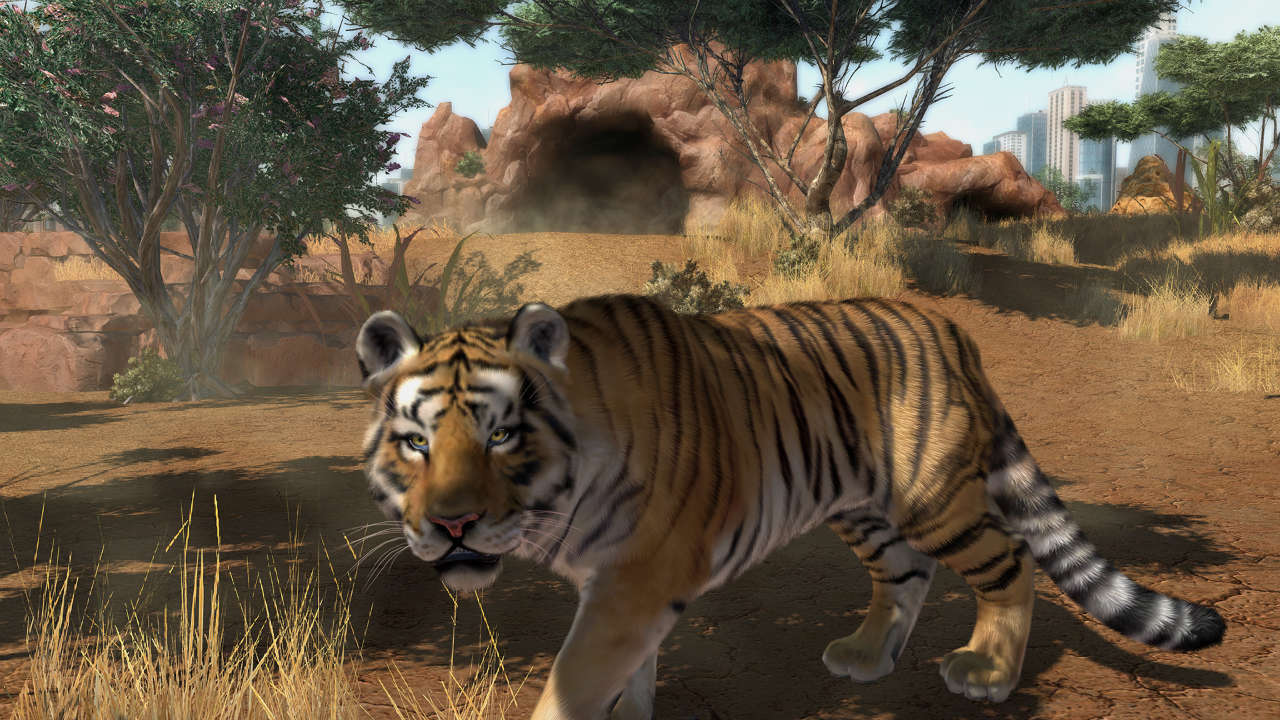 Zoo TycoonÂ  gets repetitive really quickly, but alas, such is the nature of simulation games. The key to such games is strategy, and that’s where Zoo TycoonÂ  stumbles a bit. It isn’t very deep, and it’s kind of easy. Once you have a zoo up and running it’s nearly impossible to fail unless you just lay your controller down and don’t do anything or something like that. The previous entries were filled with annoyingly tedious requirements that, if not met, could cause things to go wrong quickly. It’s cool that a majority of them are gone, but some of them should have stayed.

Also, I got really excited when I noticed how big the area is where you get to build your zoo. I thought to myself, I’ll build the biggest zoo in the history of ever and this will be awesome.Â  No. Even though the map is huge, there’s a limit to how much you can actually build on it. It’s disappointing to not even be able to fill up half of it before reaching that limit. You have to place several different habitats and structures within your zoo to achieve success, but then the game won’t let you build to your heart’s content afterwards. What a letdown.

Also, charging $50 for a simulation game just because it’s on a console now is kind of misguided. Why not charge $35, which was the original game’s price when it released? I get that the reboot was probably more expensive to make, but surely a cheaper price would lead to more sales. I’m concerned about this because I think Zoo TycoonÂ  is game that is absolutely worth checking out, but it isn’t worth $50. It just isn’t.

I’m givingÂ Zoo Tycoon Â the “Buy Cheap” badge based on its price. It’s not worth $50. It’s enjoyable and well worth playing, but it’s not very deep and doesn’t offer enough content to justify that price tag. I’m nonetheless happy to see that Frontier Developments is taking this series in the right direction. This reboot seems like the beginning of a very good thing.

Features Editor Buddy was a journalism major at the University of Alabama. He now spends his days writing novels that will probably never get published and wishing he were an extra in an Anthony Hopkins film. He's been gaming since he can remember and has owned every console from the NES to the TurboGrafx-16 to, yes, even the Phillips CD-i. He loves all games, but his favorite genres are shooters and RPGs. His favorite game is The Legend of Zelda: Ocarina of Time.
You might also like
Microsoft Studios