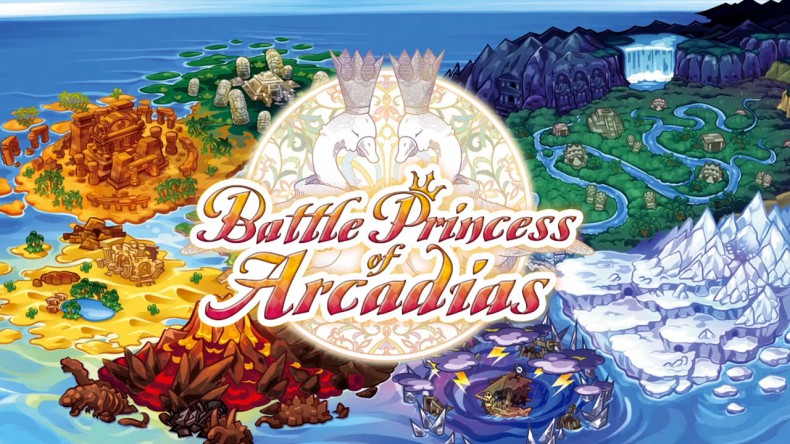 + Art style is really lovely to look at.

+If you love JRPG's, this game is as ridiculously Japanese as it gets.

+The King in this game is a Goose. Literally.

-The plot of this game is twice as long as should be, and drags. Like, A LOT.

-There are too few enemy designs, and all of them are re-skinned over and over.

Battle Princess of Arcadias as a whole, is very much like it's main character: pretty, fun, and ultimately more air-headed than it ought to be.

Once upon a time, the land of Vertex was a relatively peaceful place to live… at least until a whole bunch of monsters showed up and ruined that. For the humans to survive this sudden threat, armies were amassed to fight off the impending siege. But those armies needed princesses to lead them, and not just any fancy-schmancy princesses, they needed Battle Princesses. Enter Plume, our sword wielding heroine and the main battle princess of which the title of this game implies. Despite her royal duty to go out into the battlefield and kick monster-ass, Plume is a pretty girl with an incredibly bubbly personality. She’s also entirely air-headed, and playing a good chunk of Battle Princess of Arcadias  made me realize that this makes her a perfect representation of the entire game in general. Battle Princess of Arcadias  is, throughout the majority of it’s playtime, a visual delight to look at. It’s art style is bright, colorful, and full of the flashy effects you’d expect from a game made by NIS America. It also clearly knows it’s sitting in the JRPG genre and completely embraces it – for better or worse. Everything, from the music to the characters designs, is filled to the brim with wacky anime tropes. This means it also showers in repetition though, as there are a very select handful of enemy and stage designs to play through, and almost all of them are reused and re-skinned over and over throughout the games 150+ levels.

The battles of Battle Princess  are an enjoyable mix of old-school Final Fight  side-scrolling and your typical RPG elements, with a small dash of strategy thrown in for good measure. Each stage is wrangled into three distinct categories:

Combat stages: Run to the other side of the stage, defeating every monster you come across in the process.

Siege Battles: Basically, your typical boss fight. You and an army of Princess Brigade troops against a giant monster.

Skirmishes: To paraphrase Thunderdome, two brigades enter, one brigade leaves. Whittle your opponents army down to nothing, which is broken into a number of select groups based on what sort of weaponry they’ve brought into battle with them. These groups can then be commanded and switched out on the fly if necessary. What’s neat about this is the visual effect of watching your troops fighting in the background of the stage while you’re on the forefront.

The thing about the strategy aspects of the game though, is that I think Battle Princess  wants to believe that these elements are a lot more intelligently implemented than they actually are. In truth though, they’re a bit broken in the sense that you don’t you don’t even need to think strategically to win a good deal of the time. I spent the majority of my play-through just leveling up a few characters and swapping out weapons for better ones, and in doing so I pretty much destroyed everyone I came across, a couple of exceptions aside. I barely felt the need to switch tactics or characters in the heat of the moment. Where this game is at it’s absolute weakest, though, is its story and character presentation. The plot begins with Plume randomly walking in on her entire brigade being murdered by a giant dragon. Her story from then on stumbles and drags forward, unnecessarily filling time with moments of, “Well, the bad guy we were fighting got away. Lets stand here and talk about random stuff for 5 whole minutes,” before shoving you off to the next battle. Seriously, if not for that, this game would have been twice as short as it actually is. Despite it’s quirky humor, there were a good many moments where I wished that were the case.

Pretty much all of the other characters in the game take on the form of walking, cardboard cut-outs. None of them are particularly noteworthy or fleshed out beyond a few hints and moments of casual flirting, and their interactions with each other are given to us in an almost unacceptably forced manner. It almost gets to the point where I can see the English translator NIS hired for the game standing in the background of these conversations, bickering about how monotonous and unenjoyable his job is.

For what it is though, Battle Princess of Arcadias  is still a light and enjoyable PSN download. It’s perfectly suited for those moments when you’re taking a much needed break between grinding through NIS America’s bigger and deeper strategy-RPG turnouts. Just don’t go into it expecting much beyond it’s shallow nature. Battle Princess of Arcadias as a whole is very much like it’s main character: pretty, fun, and ultimately more air-headed than it ought to be.

Hi! I'm Tony. I'm 26 years years old and Currently living in Fayetteville, North Carolina. I've been a gamer for the Majority of my existence, stretching as far back as the SNES days. I currently own a PS3 and a PS4, but am open to anything and everything. literally, I'll pick up a controller and play anything once. I'm also pretty much the biggest and most well rounded nerd you'll ever encounter, with a love for sci-fi/fantasy/comic book everything. I also, love music, literature, and art. I guess you could call me creative! When I'm not indulging myself in any of the above things, I'm a freelance photographer, focused mainly on concerts and events and big events around NC, and a writer who writes about the people involved in said events. I'm also about to be writing a bit for gamereviews.com so yeah, hit me up if you want to know more!
You might also like
JRPGNIS Americaps3