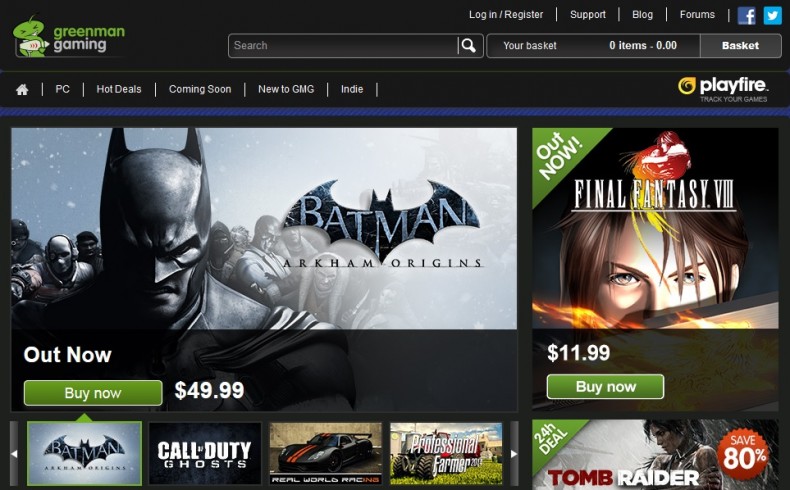 Sometimes when the rent needs paying and the bills are due, you just need a good game to take your mind off of it all. What’s that wallet? The Steam sale has gutted you? Darn it. Yeah Steam and Origin can be expensive without those seasonal sales and so I’ll get to my point: Game key stores are a (mostly) legit alternative to paying the retail prices for games. Here are some of my personal top picks: Green Man Gaming is one of my favourite key stores. It has a lot of deals running pretty much all the time. Itâ€™s been responsible for additions to my Steam library for a while and on many separate occasions. Green Man Gaming have constant deals on the site and if you are signed up, you’ll get a constant stream of promo codes sent to you for varying percentages off certain titles. Itâ€™s good for pre-orders too, and Green Man Gaming usually offer similar deals to Steam and Origin and the like, but cheaper. They also cater to the console market so theyâ€™re not left out in the cold.

This site has less â€œbig salesâ€ and is more of a sale in itself. It has massive discounts constantly on most games and even has a â€œGoldmineâ€ feature, where you can earn cash by buying. You can increase the amount you earn even more by creating a “buying syndicate” and including your friends and working together on it. G2A supports â€œDaily Dealsâ€ as well, just like the Steam platform, meaning that sometimes you can get games even cheaper. I managed to pick up Donâ€™t Starve for the not too shabby price of Â£5 about 3-4 weeks after release. GamersGate is the opposite of G2A, and tends to have lots of broken down sales. Every week they chuck dozens of discounts out at you and you can be spoiled for choice. The Origin deals are present there as well and have been pretty good in the past. I bought Crysis 3 on there for a pretty decent price. Itâ€™s nice to see cheap Origin games. Anytime. Last but not least: CD Keys. This site offers probably the best deals on new releases. Iâ€™ve gotten both CoH 2 and Metro: LL for half price-ish on this site within days of launch. Absolutely insane savings. Out of this list, CDKeys is the site I would go to for new releases. They also give you a one-time 5% discount if you like their Facebook page.

Now the sites above are not, as far as I know, vetted by Steam or Origin, but Iâ€™ve never ever had a problem buying from any of them. It really comes down to how vigilant you are over region-locked games that you buy. And if you fail to notice that the site says a game needs a VPN to activate, then itâ€™s sorta your own fault. Use carefully, buy carefully and you should be fine, but as always, use at your own risk!

To add- Iâ€™ve purchased from these sites and others like them and have had no problems. In fact, Iâ€™ve had some of my best deals from game key sites. You just need to do the legwork and you will never pay full price again.

Former Staff Writer Fraser enjoys long walks on the beach, and doesn't like rude people. He also plays a ludicrous amount of games on both PC and PS3 and is Studying Computer Games Development at college in Scotland, U.K., and of course games journalisming with these fine fellows you see above and below. His wallet fell seriously ill in 2009 of a Steam Sale and has never recovered since, leading to many, many games. He has high hopes that he can suitably inform and entertain many of you fine people, and play a part to make SpawnFirst-a great website, even better. As ever, feel free to add his steam account.
You might also like
GreenManGaming