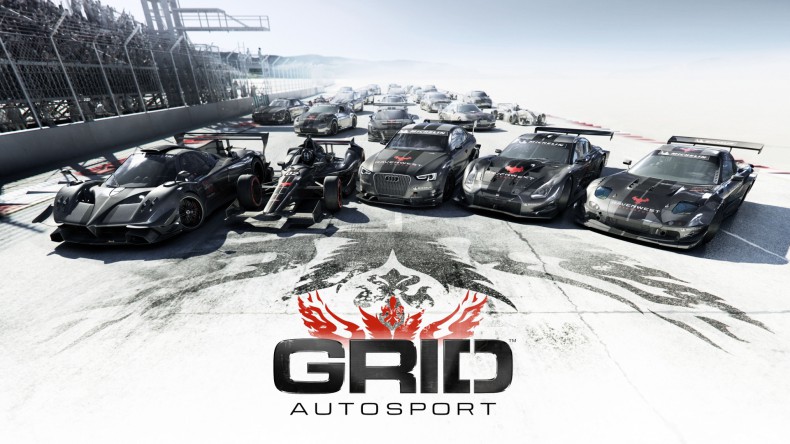 GRID Autosport is a good game for both players new to racers and veterans of the genre. That being said, there are probably more outstanding titles in the racing genre that you could spend your time playing.

I’ve never been big on racing games, and while GRID Autosport  did not make me want to change the trend, it did cause me to look at racing games differently. The game begins with you creating a racer and following them over the course of their career. There are five different types of racing you can choose from and a slew of different teams, sponsors, and objectives to discover over the course of your career.

The big draw of this game is the five different race types and the varied gameplay that they offer. There’s Touring (which is pack racing and high impact), Endurance (nighttime racing and a big emphasis on tires), Open Wheel (fast cars with little contact), Tuner (specialized races like drifting and time attack), and Street (short courses with a lot of turns). While they all do offer various styles of races, the differences beyond the obvious like car types and courses will be left a mystery to players who aren’t serious about racing games. This being said, the game is very friendly to players who are unfamiliar with the genre. I was actually quite surprised with how it caters to newer players. You can set several options to help you with racing such as a projected line showing you where you want to be on the racetrack at any given time for greatest effectiveness as well as a general read out of how fast you want to be going. Other features that make the game easier include: steering control, turning control, and traction control. You can also pretty much make the game an exercise in seeing how good you are at holding down right trigger. These handicaps don’t come without a price though, as each one you enable lowers the amount of experience you receive at the end of a race. This is a small price to pay though, as all the experience does is open more races which will open anyway as long as you continue playing. The far bigger problem with these settings is it lowers your overall ability. For example, while the game will autoset your speed for taking corners, if you have the skill to do it manually, you can maintain much more speed and control. That’s all dependent on actually having the skill though. If you’re like me and can’t take a sharp corner without spinning out of control then you may want to stick with a turning control. But even if you do mess up hitting that corner, the game features an ability that allows you to rewind several seconds and try again. More often than not, I found myself using this ability as a crutch and a way to bypass other drivers by seeing how exchanges would play out. I found the actual races themselves to be repetitive and mostly boring with some brief moments of excitement. When I say repetitive, what I mean is that you typically have to do every race two to four times. Do a practice run, followed by a qualifying run, followed by the actual race which you typically have to run twice. You can skip the practice and qualifier, but then you’re going in blind and starting at the back of the pack and you’ll do considerably worse than if you had done the preliminary races. So, by the third time or so you run the race it becomes very tedious.

The races themselves varied with how exciting they were. Typically a lot of action occurs in the first lap with a lot of jostling for position but after that, the race becomes pretty static. There’s an occasional attempt at your position but it’s easily remedied (especially with the flashback feature) and sometimes you’ll get the chance to overtake an opponent but these moments are few and far between. However, these moments, and the first lap jostling, do allow for some great moments of out-driving your opponents and they’re pretty thrilling.

The other major problem that I had with the game is that for all the noise they make about joining different teams and picking different sponsors, the function is very hollow. You pretty much pick some teams and they have goals for you that you get extra experience for completing but if you do poorly on these goals, the game tells you that it’s no big deal and you can always do better next season. I never felt like I had to justify my place on the team or that I was in danger of losing sponsors, which seems like it would be a mechanic that would go hand-in-hand with having a system of teams and sponsors. The only thing the different sponsors offer are different goals for you to achieve with varying amounts of experience. They don’t offer much in the way of varying vehicles or funds to upgrade them, but the upgrading options are pretty limited so this could be by design.

GRID Autosport  would definitely be good to pick up if you’re looking to branch out into the racing genre. It’s simplistic controls and newbie friendly options make it easy to pick up and play. It’s varied racing types and the potential for more in-depth control may attract more serious fans of the genre. While there is great rewards for actually becoming skilled with the games quite realistic mechanics, the shallow nature of everything outside the actual races may drive you away. GRID Autosport is a good game for both players new to racers and veterans of the genre. That being said, there are probably more outstanding titles in the racing genre that you could spend your time playing. Don’t go out of your way to drop too much money on this title.

Evan has been a dedicated gamer since 1995 when he got his first console (a Sega Genesis). A graduate of Shippensburg University, Evan spends most of his time writing about gaming, literature, and nerd culture in general. XBL: Eftsoons PSN: HideousToshi Steam: HideousToshi LoL: Eftsoons
You might also like
PCPlayStation 3Xbox 360