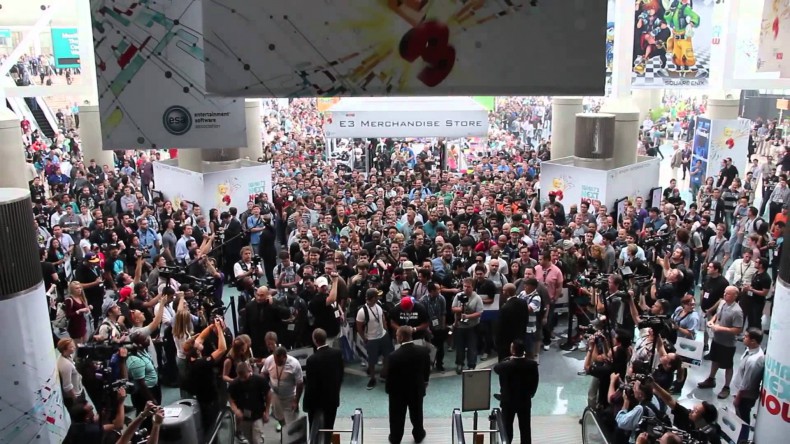 Any gamer worth their salt knows that E3 is coming up, and is waiting with bated breath to hear the announcements from the biggest companies in the gaming industry. The current-gen lot are all awaiting Grand Theft Auto news, the PC camp are… also awaiting GTA news, by the looks of it, and the Half-Life lot are sat around in a circle burning effigies of Gabe Newell, but that’s pretty standard behavior.

Originally this article was intended to be a comparison of female presentations and male presentations—seeing if women presenting on behalf of a company present in a different way, the ratio of men to women, and an analysis of non-binary (trans*, agender, androgynous, etc.) representation of gender at E3 in any form. During the writing of this article, I attempted to find statistics on female attendees of E3, and female presentations given. Googling ‘women at E3’ or something of that ilk turned up almost nothing on the subject I wanted to write upon, but instead turned up dozens of stories from women who attended. These were not very pleasant stories at all. As for non-binary genders, enby (non-binary, or n.b.) gamers do not, according to the internet at large, exist (I’m sure the ones I’m friends with will be very confused when I tell them) and I could find nothing on their involvement in E3, whether it be in games, or in a more meta sense as part of the presentation or staff. How odd.

When thinking about gender and E3, most people would have a very familiar—and probably accurate—image. It’s hardly a single-gendered event—there’s a healthy mix of men and women there. But what are their roles? You probably—and I’m not attacking anyone who does have this thought—think of the ones giving the big presentations and being interviewed, as well as, mostly likely, doing the interview. It’s a professional, press-only event, and to most people, professional means masculine—business suits and smart shoes, and mostly on men. Most people—Forbes, for one—seem to assume, like the Google Images results for ‘women at E3’, that the majority of females are booth babes—not that there is anything wrong with being a booth babe, but it’s hardly accurate to assume every woman there is one, and that any woman will summarily be mistaken for one if not dressed like the Puritans stormed her wardrobe the night before the event. There is a heavily sexist air surrounding E3 at the moment, and while I can hope that 2014 will be a bit better, the track record of E3 is not fantastic. Let’s look at last year, like I planned to, and see what that gives us. If you look really closely, you can SEE WOMEN. Wait. You don’t have to look closely at all.

In a world where over 45 percent of gamers identify as female—and certainly a large number identify as non-binary, although there are no clear figures on that as no studies have ever been done—you would think that women would receive at least 45 percent of the representation. This is so very not the case. At E3 2013, Sony famously didn’t feature any women executives or directors. There was the infamous rape joke, which is not just unacceptable from a feminist point of view, but from the point of view of anyone, of any gender, who is a rape victim. All in all, it was not a good harbinger of things to come, although the uproar that was created could give shape to this year’s E3 in a much better way.

There were also smaller, but no less important incidents of sexism prevalent against female journalists, PR agents, and female attendees of the conference. These have been chronicled elsewhere, so I’ve provided links rather than hash it all out again, but the point is, all of this is evident of a stronger trend in gamer culture and the gaming towards gender bias within the gaming industry, and that is now what this article is about. It’s what every article is about, eventually. I’m not saying anything here that a thousand other writers haven’t said before, but this point still has to be raised, and we’re a year on from when it had to be mentioned last year. As a woman—yes, I know, but if you look at my picture and really squint, you can tell—and a gamer, I would like to see some evidence that my interests are being catered to, that someone who knows what I want out of a game through firsthand experience is making sure my opinions are being heard, and I would damn well like to make sure that while they’re doing it some idiot isn’t shoving his hand into their cleavage. E3 is a professional event, and I would hope that at E3 2014 that is reflected in the gender bias—or lack of, rather.

So maybe this year Sony can show they have women who work for them. Maybe Microsoft can have a woman on the panel without someone making a rape joke. Maybe this time next week this article will be completely irrelevant. One can hope, right? I shouldn’t be holding out more hope that Half-Life 3 will be announced than that 45 percent of an industry—a whole gender—will be respected, and given fair representation. Nobody should ever have to sink that low. Ugh.

Stephanie is a blogger who is interested in investigating social issues such as feminism and how they affect modern media, in particular video games (which she has a strong passion for!). She also enjoys writing, specifically steampunk and horror.
You might also like
E3ArticlesFeaturesStephanie Downes