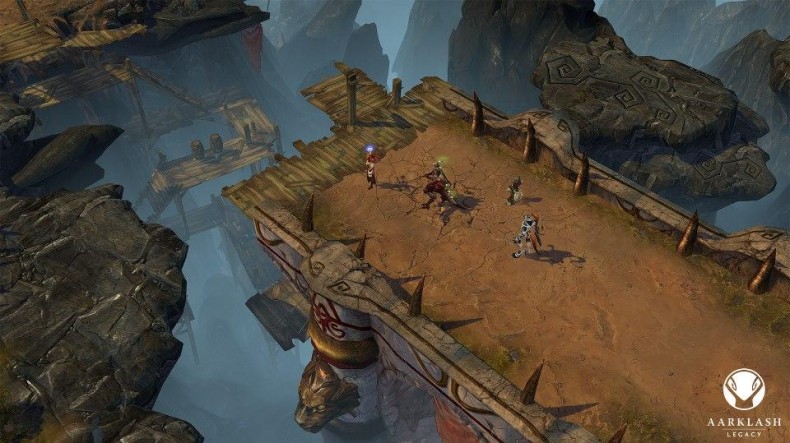 Aarklash is a middling game struggling to break through into "good" or even "quite good". The reason I have perhaps been harsh with this is because games like this strive for excellence and fail to achieve through unambitious graphics and sounds. I don't mean that they didn't spend like a $1m and that's wrong, I mean that there is nothing innovative about either of them, cost doesn't matter as much as innovation in this industry.

The world of Aarklash: Legacy is a complex and engaging endeavour into the depths of fantasy. It braves a new world of fantasy where the Goldmongers, essentially a massive bank that rules with a golden fist over the unassuming Barons of Alahan, who are waging war with the evil Dark lords of Acheron. The story all seems very interesting at a glance, but this is one of those rare games where the story is there because it â€¦just is. From the outset, it doesnâ€™t make any difference if you observe the story or not, the game is based on and lives in the strategic combat system and that is about it.

As I said before, this game doesnâ€™t have much to do with the story, in a peculiar way it works better that way, as the gameplay is really full on and possesses a ridiculous learning curve in itself. The game is based on strategic combat, you get 4 â€œWheel Swordsâ€- the private mercs of the Goldmongers as your squad. You go through the levels with these four characters and partake in small engagements and boss battles. Itâ€™s really a straightforward concept, with large amounts of potential to succeed. It feels and looks like Path of Exile, but plays like an RTS.

The heavily diluted genre mix of RTS/RPG and Fantasy, from a gameplay stand point can make your head spin a little. The main focus is on the combat, which has its ups and downs to be honest. On one hand you do have the tactical system that is well-structured, in that it will pause the game as soon as you spot some bad guys, so that you can plan your strategy and ultimately beat your opponents in a tactically clever manner. But on the other hand, the UI is a little messy, which leads to mistakes early on which can be persistent throughout, itâ€™s also not particularly intuitive and can be pretty annoying. Thereâ€™s been more than one instance where Iâ€™ve been unable to switch character because of the complicated crap that goes along with it.

In general, Iâ€™ve found that the gameplay was pretty dull and not at all moreish;, it never made me think â€œI will play this until my eyes bleedâ€, which with a fantasy game kind of needs to happen. I know I said the story wasnâ€™t particularly important, and thatâ€™s still true, because even without the story the gameplay should beâ€¦well, good. One thing I would say it had going for it was that it seemed to have very good classes and a class advancement system. It gives you experience points in which you can use in the generic way of advancing skills etc. But, the impressive balance with the skillsets does bring back some of the disappointing UI issues. You can have your magic slinging Repo guys and your sword/knife/giant-round-shuriken thing wielders and you will be able to tell the difference very clearly. You also get items that can give classes decent buffs, for example, a ring that gives a magic shield to the character. You could apply this obviously, to your already magically shielded characters for a buff, or even on un-shielded characters for extra protection.

The graphics in this game sports a not-so-unique art style, Iâ€™ve seen it before in games like Path of Exile and even Dota 2. Itâ€™s not particularly original- but with that said it is still pretty good, it follows the right kind of feel that the other games have, and it automatically assigns fantasy as a genre for me, so I know what to expect graphics wise. The graphics themselves arenâ€™t at all flashy, but some have reported that it will tax your GPU (Radeon) nonetheless. We’re here for your orb…thingy. Should have made the payments.

The sounds are similarly unambitious and donâ€™t bring any kind of immersion to the game as theyÂ  are pretty standard for games of about 3 years ago and with Aarklash: Legacy, it seems like they were aiming a little higher and missed the mark, which is disappointing.

The whole intention behind Aarklash is to present tactical combat consisting of 4 different classes that fall into different archetypes. You get the typical mage/warrior/thief/cleric classes and they represent the main party. You also get random loot and new party members as your game wares on. Iâ€™m a gigantic fan of both randomized loot/items and procedurally generated areas. Obviously the latter wonâ€™t apply in most cases (this one included) but the former, does. I would buy this game cheap if I were you. Itâ€™s enough fun for $20 and I donâ€™t think thatâ€™s a price people should pay for it. It is however worth playing so I would give it a go at least at some point when itâ€™s on sale or comes down in price.

Former Staff Writer Fraser enjoys long walks on the beach, and doesn't like rude people. He also plays a ludicrous amount of games on both PC and PS3 and is Studying Computer Games Development at college in Scotland, U.K., and of course games journalisming with these fine fellows you see above and below. His wallet fell seriously ill in 2009 of a Steam Sale and has never recovered since, leading to many, many games. He has high hopes that he can suitably inform and entertain many of you fine people, and play a part to make SpawnFirst-a great website, even better. As ever, feel free to add his steam account.