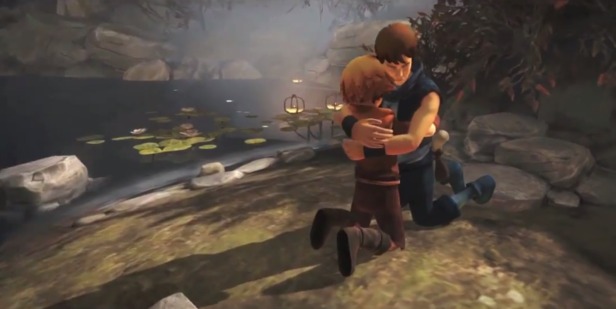 The storybook setting allows for a great story to be told even without a discernible language or subtitles; The controls are tough to figure out, but are ultimately rewarding; The environments are breathtakingly gorgeous

It costs $15 and offers nothing more than around three hours of gameplay; The puzzles are all a bit too simplistic; The damsel-in-distress trope rears its ugly head in the later parts of the story

Brothers: A Tale of Two Sons is absolutely one of the best games of 2013. It caused me to break down into tears and genuinely sob, which is a feat no other game this year has accomplished. It made me appreciate and love my brother more. When a game can accomplish stuff like that, it's truly a special occasion. Brothers is a must-play.

I Am My Brother’s Keeper

It’s been a few days since I completedÂ Brothers: A Tale of Two Sons.Â I’ve been playing several other games since then, but I keep getting distracted. My mind keeps drifting back toÂ Brothers.Â The beginning. The ending. It’s wonderful. I would describe the experience as akin to that ofÂ JourneyÂ orÂ Ico.

Two brothers set out on a quest to retrieve a liquid called the “Water of Life” that will supposedly cure their father’s illness. That’s the setup, and it may lead some people to believe thatÂ Brothers’Â story is yet another predictable and forgettable one. But to those who actually make an attempt to forget it I say this: good luck. Starbreeze Studios (The Darkness) has crafted a tale of such haunting beauty, of such natural grace, that it’d be foolish of anyone to write it off as “just another game”.Â BrothersÂ is so much more than that. It’s one of those rare games in which the narrative and gameplay perfectly cohere to create a life-affirming adventure.

InÂ BrothersÂ the older brother is controlled with the left analogue stick and left trigger and the younger brother is controlled with the right analogue stick and right trigger. Those are the controls. Controlling two characters in a single player game takes some getting used to, but once it clicks, it sticks.Â BrothersÂ is meant to be played alone. If a co-op option had been included in any form it would have transformedÂ BrothersÂ into a lesser game.

The controls are in place to serve the story. They flawlessly achieve that goal. Players can feel the struggle these brothers are going through during their journey. The controls also show how much these brothers depend on one another, as all brothers should. It took me quite some time to get used to holding down the correct trigger for each brother, but I loved every second of Starbreeze’s ingenious and original approach. Once the game was over I appreciated the mechanics even more so.

The triggers perform every action inÂ Brothers.Â For example, the younger brother must sometimes drop a rope down to the older brother so he can reach a ledge. The brothers inÂ BrothersÂ commit no acts of violence up until a boss battle at the end of the game, and then it feels necessary.Â BrothersÂ mostly relies on puzzles, and hardly complex ones at that. The most complicated thing players will be doing inÂ Brothers,Â other than learning the controls, is turning a handle.

It’s the small stuff inÂ BrothersÂ that really matters. Helping a woman sweep her porch or goofing off and annoying her. Attempting to play a harp. Skipping rocks across water.Â BrothersÂ features many easy-to-miss moments like these that are well worth seeking out. Starbreeze has created a world of immeasurable wonder, and missing out on any part of it is a mistake.

BrothersÂ is a gorgeous game. The art style is reminiscent of FableÂ with some goofy-looking characters, but they all fit in the world.Â The storybook setting makes way for some breathtaking vistas. I encountered no framerate issues and maybe two bugs during my entire playthrough. The soundtrack is barely noticeable as it fades into the background noise, which is to say it suits the game pretty well.

No discernible dialogue exists in Brothers. The characters speak a gibberish language and there are no subtitles. Even so, the story gets told, and told beautifully. It relies on the players’ interaction with the two brothers and its setting to get its point across. It proves that games nowadays don’t need a 2,000+ page script to do what they need to do.

The puzzles inÂ BrothersÂ all come across as a little too easy. I wouldn’t have minded a bit more depth along the way. The game is short, clocking in at around three hours, which isn’t really a problem except for the fact that it costs $15 and offers no extra content. It wasn’t really an issue for me, but it will be for some people. Also, Brothers‘ storyÂ relies on the damsel-in-distress trope a little too heavily as it nears its ending. The damsel inÂ BrothersÂ is flirty and may as well have “idiot” written on her forehead, though the story does turn a lot more sinister soon afterwards.

Brothers: A Tale of Two SonsÂ is absolutely one of the best games of 2013. It caused me to break down into tears and genuinelyÂ sob, which is a feat no other game this year has accomplished. It made me appreciate and love my brother more. When a game can accomplish stuff like that, it’s truly a special occasion.Â BrothersÂ is a must-play.

Features Editor Buddy was a journalism major at the University of Alabama. He now spends his days writing novels that will probably never get published and wishing he were an extra in an Anthony Hopkins film. He's been gaming since he can remember and has owned every console from the NES to the TurboGrafx-16 to, yes, even the Phillips CD-i. He loves all games, but his favorite genres are shooters and RPGs. His favorite game is The Legend of Zelda: Ocarina of Time.
You might also like
a tale of two sonsbrothersfable