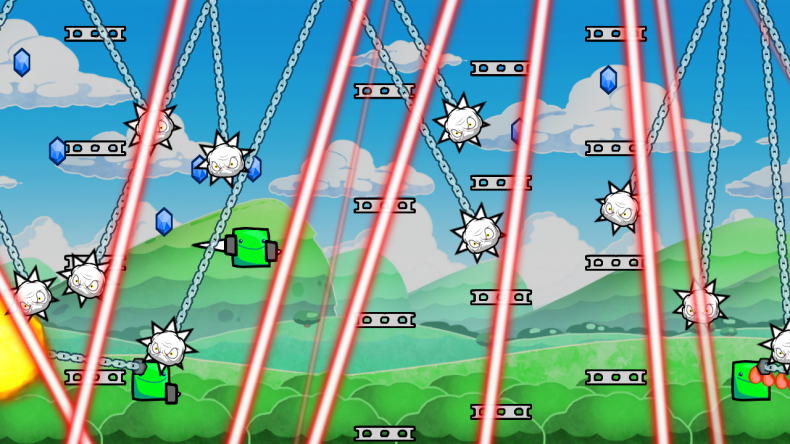 Controls feel loose and levels can feel generic at times; Art and Sound is weak

Cloudberry Kingdom presents a unique idea that could easily have fallen flat and ended in boring, uninspired, or broken gameplay. It delivers on the promise of dynamically introducing challenging levels and making a presence as one of the most creative titles this year. There's a ton of stuff to keep you entertained with this game for quite awhile -- Oh, and it makes a pretty good party game, too.

Cloudberry Kingdom is based on a novel â€“ yet extremely promising â€“ concept: Itâ€™s a platformer with nearly limitless replayability, because every level is randomly generated. Â While this might seem like a cheap gimmick intent on attracting consumers only for its unique take on an established genre, Cloudberry Kingdom has overcome impressive obstacles and, despite some noticeable flaws, is an innovative title that sets a standard for creativity.

The name ‘Cloudberry Kingdom’ might be reminiscent of a light-hearted JRPG, or a game in the style of Legend of Zelda. Â I was a bit taken aback when I learned that, instead, it was a ridiculously demanding platformer with a difficulty curve that could potentially be through the roof. Â I was most intrigued by the game’s unique approach to level design, though: There is none. Â Cloudberry Kingdom randomly generates every level you play, every time you play.

While there is a story mode included, it’s obviously not the draw. Â Only a scant amount of cutscenes appear intermittently throughout the vast campaign (which also consists of random levels), and tell the story of an unorthodox hero named Bob and his reluctant hunt for the princess who (surprise!) has been taken captive by an evil villain. Â Cutscenes play out with a strange art style that feels like stop-motion animation with paper mache. Â It gives off a strange vibe, with dialogue that is similarly tongue-in-cheek. Â The cinematics are so few and far between, though, that they feel tacked on. Â These could’ve been used to provide the players with a reward for some more gruelling portions of the game, but instead, the generally fall flat.

Naturally, the entire foundation for which Cloudberry Kingdom was built could be a cause for concern. Â Without somebody manually designing levels, you run the risk of a game bloated with broken, unbeatable, or bland stages. Â Unless the system has all the kinks worked out, the game will fail.

Thankfully, in that respect, Cloudberry Kingdom hits the ball out of the park. Â Between providing various obstacles and deathtraps (such as spikes and lasers) and random character modifiers (one makes Bob a fraction of his normal size, while another gives him a jetpack), each level is also placed over a variety of settings. Â Strangely, though there’s only a limited number of what can be presented,Â everyÂ levelÂ feels fresh and different than what came before, andÂ everythingÂ seemed completely beatable.

Between the three different modes – the aforementioned Story, survival-based Arcade, and Free Mode (which allows you to set sliders for level randomization however you see fit) – difficulty ramps nicely. Â You’ll start off with simple stages that require minimal jumps and can be conquered in seconds. Â As the game wears on, though, you’ll slowly be presented with a nearly screen-covering array of obstacles and enemies, and it’s incredibly satisfying. Â The game takes its time to work you up to the sadistic level of gameplay it can provide, and this level pacing is a standout feature.

If the game does ever get a little too difficult, there’s a few crutches to get you through. Â Since no walkthrough could accurately guide you down a random level, Cloudberry Kingdom gives the player all the tools within the power-up menu. Â By collecting crystals throughout a level, you’ll gain access to different powerups: One slows down time, while the others show you specifically how to navigate a tricky level.

Aesthetically, Cloudberry Kingdom can be rather boring. Â The simple, flash game-style graphics were clearly meant to give off a more innocent feel, but they lack the certain punch that should make the game stand out. Â The sprites and art that make up every level are pretty standard, and that goes double for the lifeless soundtrack. Â Though it can have its moments, the few tracks on display get tiresome after a few listens. Â Sound effects, like those that appear when Bob is killed or jumps on an enemy, sound canned, reused, and forced.

Up to four players can play locally on Cloudberry Kingdom. Â It’s essentially a cooperative experience, as you all work together through Arcade, Story, or Free Modes, and just a single player needs to reach the end to progress. Â The gameplay is fun and chaotic, and the randomly generated levels are infinitely more fun when others are there to enjoy them with. Â Unfortunately, multiple on-screen characters can occasionally hinder your own performance as others obstruct your view, but it’s a flaw that is easy to overlook.

Because no level has been meticulously designed to vary up playstyles, most of Cloudberry Kingdom can seem like a one-trick pony. Â Nine times out of ten, if you get stuck on a level, your best bet is to put your head down and blast through the level at full speed. Â That may seem like poor advice, but the game’s level generation only seems to take so much into account; every time I got stuck, holding my stick to the left without letting up (along with a few well-timed jumps) could usually get me through.

It’s disappointing that the game couldn’t cater to varying strategies, but perhaps it’s for the best. Â Cloudberry’s controls feel lackluster and, at times, hard to maneuver. Â Some weird hit windows for objects and platforms may be a few small complaints, but in a game where precision is everything, they are important to note.

Though different modifiers, characters, levels, and arcade modes can be unlocked, there isn’t a whole lot to make you stick around if the level generation starts to become boring. Â Thankfully, that will probably take quite a bit of playing to happen.

Cloudberry Kingdom presents a unique idea that could easily have fallen flat and ended in boring, uninspired, or broken gameplay. Â It delivers on the promise of dynamically introducing challenging levels and making a presence as one of the most creative titles this year. Â There’s a ton of stuff to keep you entertained with this game for quite awhile — Oh, and it makes a pretty good party game, too.

Former Contributor Nolan Alber is a college student from North Dakota. He enjoys rescuing puppies from burning buildings and beating up criminals on the streets, and often lies about his interests to make himself look better. Nolan is an avid gamer on PlayStation 3 and PC. He impulse-buys more video games than he can actually play, and is a fan of shooters and fighting games (even though heâ€™s terrible at the latter).
You might also like
cloudberry kingdompwnee studios