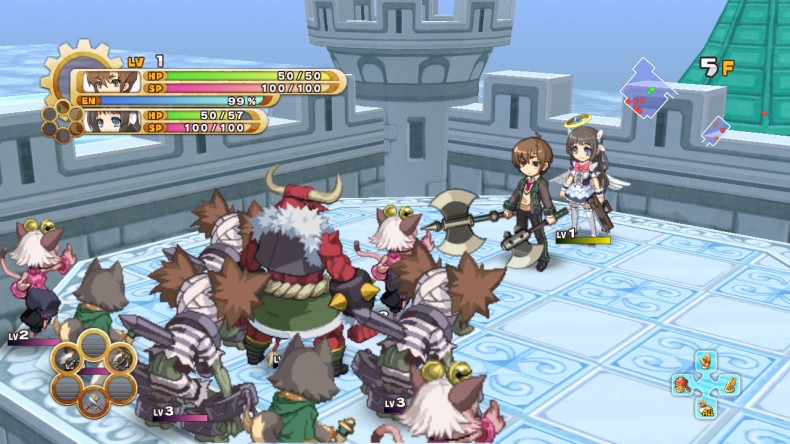 Not for the feint of RPG heart, text heavy, unorganized tutorials, doesn't grab interest for too long

If you aren't a die-hard RPG fan, you can't tolerate a text heavy game, or you were expecting a similar experience to Disgaea, this game is not for you. Unless you're used to games like that, I would recommend renting it first to give it a go and see how you like it. If you enjoy it and can handle the text heavy parts of the game, then buy it for yourself. But for someone, like myself, who is picky when it comes to RPGs and simply can't find enjoyment in a text-heavy game with minimal gameplay, I can't recommend buying this game.

Try your hand at the lottery… You might become God!

The Guided Fate Paradox is an RPG from the creators of theÂ Disgaea series. However, if you’re hoping for an exact replicated experience ofÂ Disgaea, you might want to pump the brakes a bit. While the art style is the same as that ofÂ Disgaea, the gameplay isn’t exactly the same.Â The Guided Fate Paradox follows a young high school student named Renya Kagurazaka who stumbles upon a lottery and becomes God. He is then thrust into a world beyond anything he could possibly have imagined.

The Guided Fate Paradox is, in essence, about a young man who doesn’t have the best relationship with Lady Lucky. That all changed one day when he randomly wins a lottery. But the prize he wins is something far greater than money – he becomes God. In a weird twist of fate, he acquired a ticket for the lottery while grocery shopping and, when he went to the booth (which is run by the next God’s personal angel) to see if he’d won (with no explicit hope that he will), it just so happened that he did. The lottery was won by cashing in the ticket and spinning a wheel called “The Lottery Machine of Destiny.” Whoever was set to win, would have a yellow ball drop which deemed the person “the chosen one.” 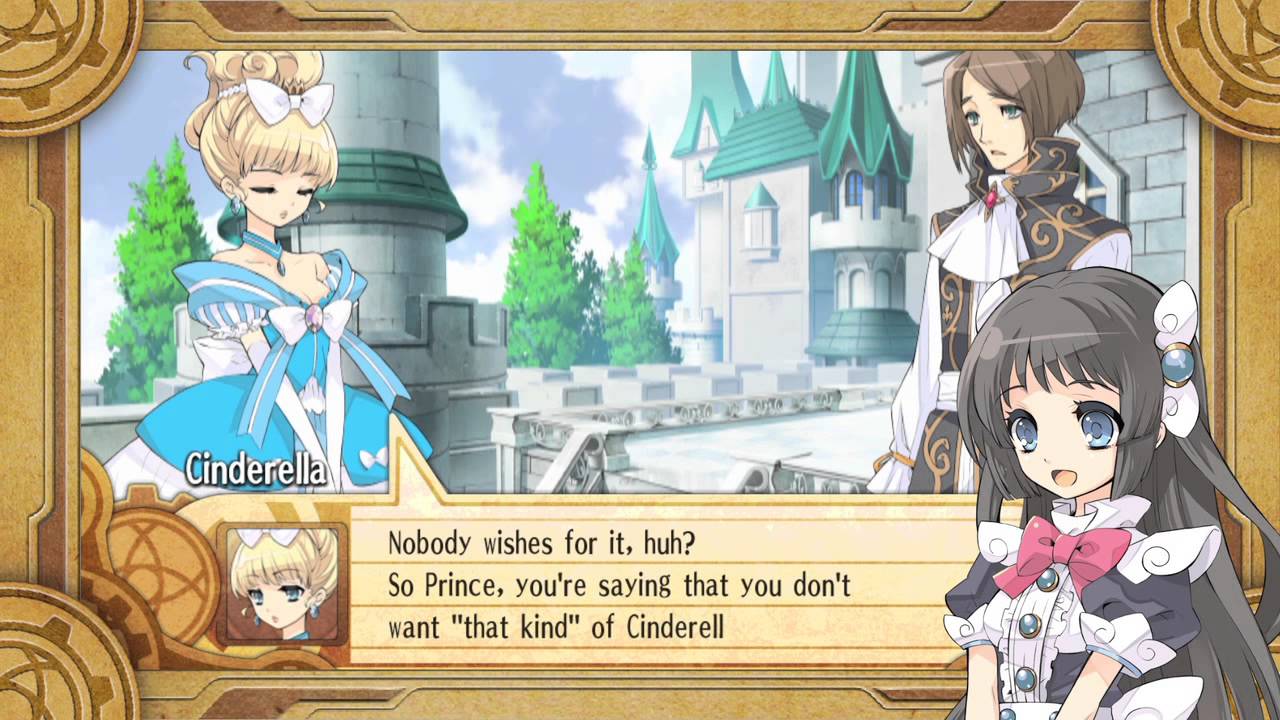 The lottery had been going on for years, with no winner ever surfacing. Many people thought it was a hoax – they believed that the winning ball never existed. Renya proved that wrong by winning the lottery. When he won, the angel running the booth, Lilliel Saotome, knocked him unconscious with a nail bat (of all things) and transported him to Celestia, the world where God lives and carries out his duties. Celestia has one “Golden Rule” – once you begin the process of granting a wish, it must be fulfilled by any means necessary. If Renya can’t grant the wish, he will be consumed.

Well, what if Renya doesn’t want to be God? What if he wants to go back to being a normal teenager? If that were to happen, he will be consumed by an “unknown force” and there is mention of this made a few times in the beginning of the game. No one really knows what this “unknown force” is, though, as Renya asks what exactly that means and he just gets a collective answer of “I don’t know” each time.

Renya has seven angels helping him in Celestia, including Lilliel, to support Renya on his quest. The seven angels who are supposed to help Renya are Rakiel Ijuin, Kuroiel Ryuzaki, Lanael Shiratori, Cheriel Ayanokoji, Galtion Himekawa, Neliel Tojo, and Mysiel. Each of these angels can be used during battle.

The way that Renya can begin guiding people’s fates and granting his worshippers wishes is by entering the Fate Revolution Circuit. Wishes can be granted for anyone, be it a human, a fairy tale character or even an alien. As long as there is a wish to be made, the Fate Revolution Circuit can grant God the ability to grant the wish. The Fate Revolution Circuit has a filtering function that grants God the ability to grant wishes that are within his abilities. He is then transported to the Copy World, which is an exact replica of the Real World in its simplest form. In the Copy World, Renya fights aberrations in the Copy World which are the physical manifestation of the worshipper’s mental blocks. Once Renya clears out the aberrations, he is then free to grant the wish completely. 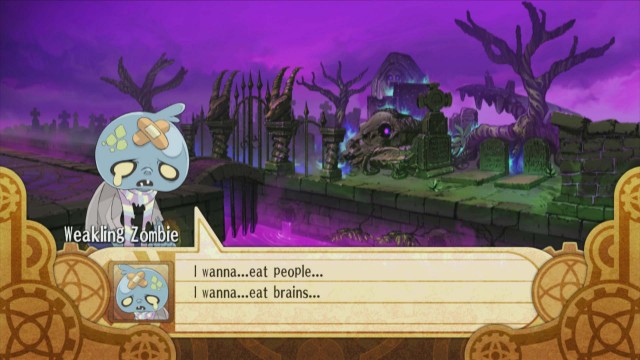 Celestia (the central area of the game) is extremely reminiscent ofÂ Disgaea. The way to gain access to other areas is by talking to characters in the area that have a bubble with a picture icon over their head.

When in the Copy World, taking steps depletes Renya’s EN (energy) bar but replenishes the HP bar. When his energy reaches zero, the HP bar will begin to deplete. Reaching zero HP makes Renya faint and exit back to Celestia. Eating food in the areas will prevent this from happening. Food is eaten in the items menu. The items menu is accessed by pressing triangle. 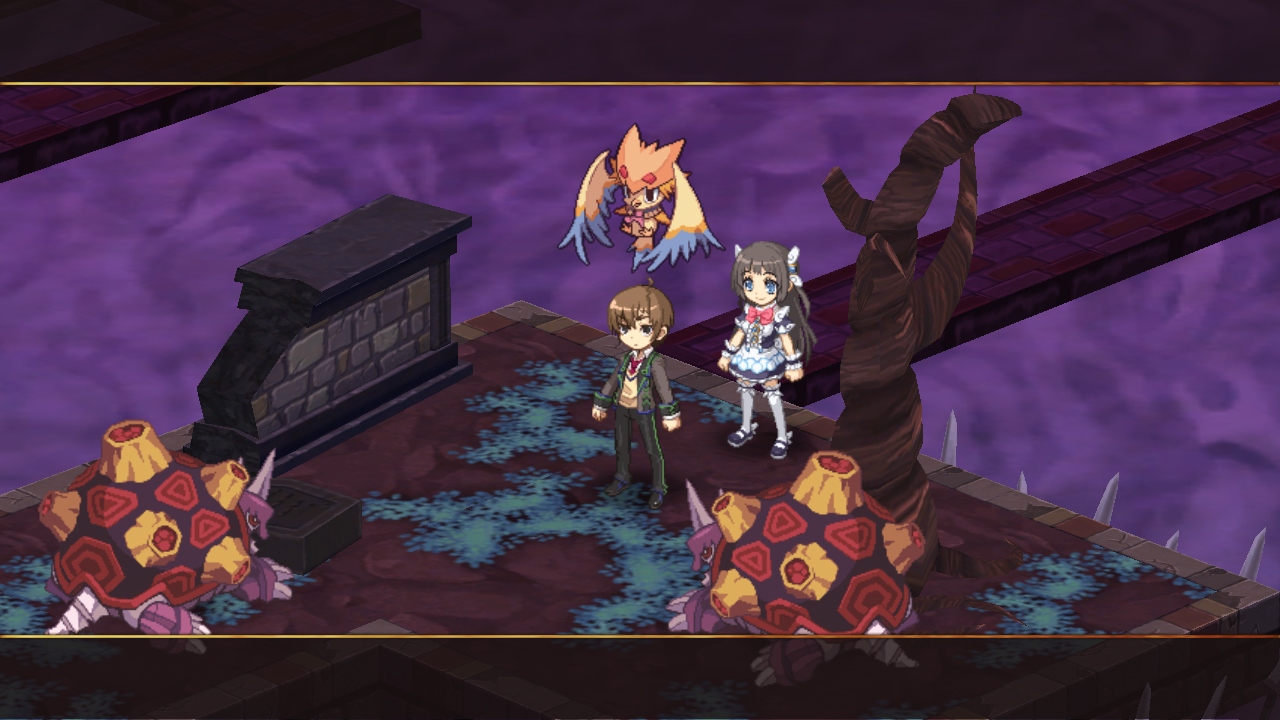 Before the start of the first dungeon, the the game allows you to pick your favorite fighting style. The options include close quarters, ranged, defense, or stylish.

The game takes a somewhat longer time than it should while saving.

The graphics in the game are typical of most JRPGs – anime styled and cartoonish. The game stays true to this art style throughout as everywhere you go looks like a cartoon-like world, looking something like an interactive manga of sorts. The art is done beautifully as can be expected of the anime art style. The graphics are visually pleasing and easy to look at.

Renya has internal dialogues that doubles as his thought process and him talking to the player. The music is relaxing. In a game that might not be for everyone, the music is a saving grace. The music fits the scenario that is going on during the time, as well as attributing to conveying the mood of the scene. If the characters are angry, the music changes to show us just that.

The voice acting is well done. You can clearly hear the emotion in the characters voices when they speak. Especially when it comes to Renya’s inner dialogues and talking directly to the character, it is easy to distinguish (aside from visual cues) when the change happens. 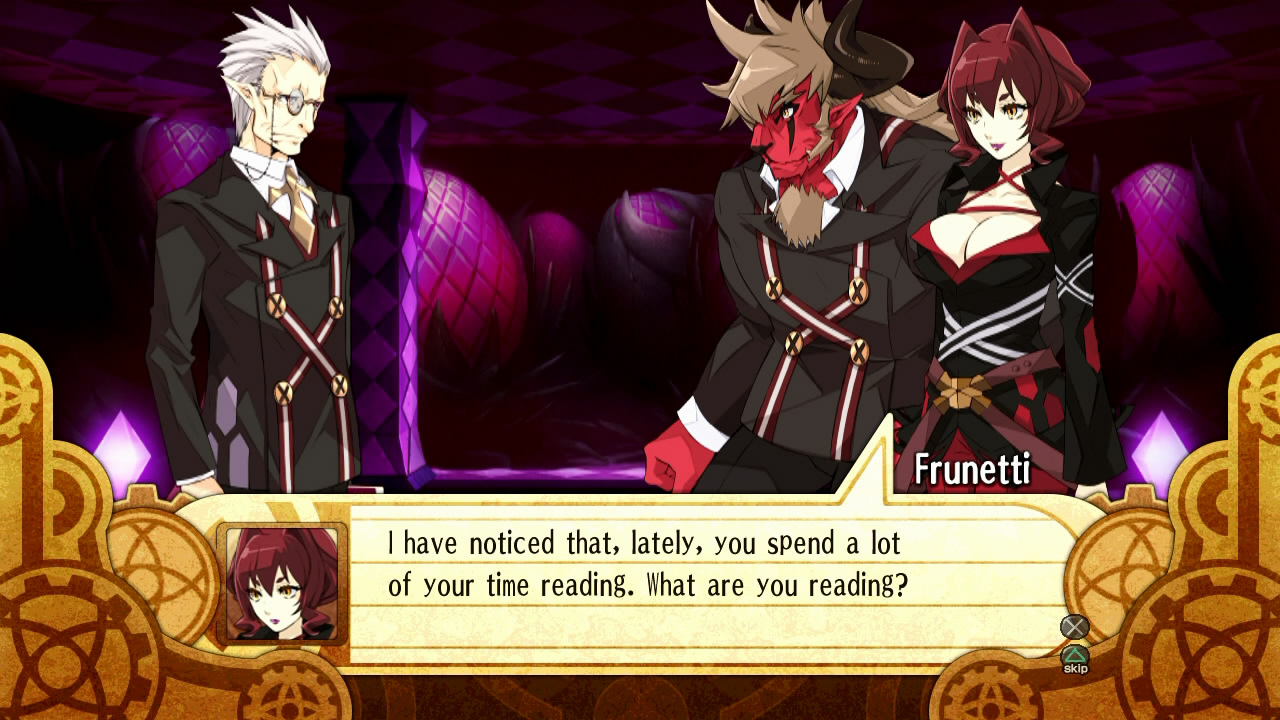 The game has way too much dialogue. Granted most RPGs are text heavy but this take it to a place of 1 minute of gameplay to 10-15 minutes of dialogue.

The game does a great job of setting up the story before starting. The set up is in depth to the point that you feel like you know Renya and how he’s struggled with bad luck for years. You feel happy for him that something has finally turned around and he’s got something good for him despite the fact it’s something so grand he might not have wanted.

If you aren’t a die-hard RPG fan, you can’t tolerate a text heavy game, or you were expecting a similar experience to Disgaea,Â this game is not for you. Unless you’re used to games like that, I would recommend renting it first to give it a go and see how you like it. If you enjoy it and can handle the text heavy parts of the game, then buy it for yourself. But for someone, like myself, who is picky when it comes to RPGs and simply can’t find enjoyment in a text heavy game with minimal gameplay, I cannot recommend buying this game.

Former Editor-in-Chief Angie has a passion for gaming. She has never been able to put the controller down since first picking up an SNES controller at the age of 3. She loves researching anything gaming related and talking games amongst her friends.
You might also like
Nippon Ichi SoftwareNIS Americareview