The Bureau: The Disappointment of Change 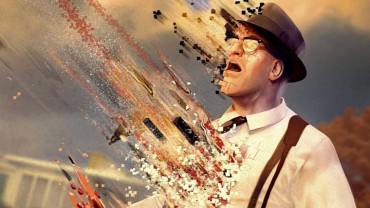 Hop into my DeLorean and letâ€™s take a ride back to E3 2010. That year, one of the biggest and most exciting games revealed at the show was XCOM, an exciting and creepy FPS take on the classic franchise with the same name. Â Here is the trailer in case you guys donâ€™t remember it:

…THAT BLOB WENT INTO THAT GUYS FACE!!!

Anyway, when I first saw that trailer, my initial thought was â€œwow, this game has the potential to be something great.â€ The whole premise behind the game is that these creepy, amorphous aliens start appearing in the US and a special government unit, known as XCOM, is deployed to investigate and eliminate the extraterrestrial threat. These â€œblobsâ€ had the ability to force their way into a host body, making them much harder to track down and kill.

The job of the player was to do research using a camera to understand the aliens, discover their weaknesses, and steal their technology to use against them. In a way, it was mildly reminiscent of the camera from Bioshock 1 & 2, in which the player would gain advantages from researching the enemy. I was exceptionally excited for the game because I thought the whole concept was unique and intriguing. I waited with baited breath for more news on it.

A year ticked by, and at E3 2011, 2K Marin showed off XCOM again; but this time, they went for a slightly different approach. The developers had worked in a tactical aspect and changed the creepy blob aliens, which had grabbed my attention in the original trailer, to a more digitized version of them.

If you watch the trailer above, youâ€™ll notice that the aliens are made up of shards ofâ€¦ something stolen from Tron. Youâ€™ll also see the main character giving orders, and that the fights are taking place in the streets, not in suburban homes like in the first trailer. I also found out that the developers changed the time period from the 1950s (as it was in 2010’s XCOM) to the 1960s. Still, even with all these minor changes I was extremely pumped up from this game to come out.

After the 2011 trailer, XCOM went missing for two years. It didnâ€™t write home, it didnâ€™t call, nothing, not even a note! During this two year disappearance, 2K dropped XCOM: Enemy Unknown in late 2012. The game followed the traditional XCOM formula of over-head tactical gameplay. While the game was pretty well received, I was disappointed with its existence in general. Where was that kick a** XCOM game I was promised nearly 2 years earlier?!

In May of 2013, I got my answer. 2K finally brought XCOM, now renamed The Bureau: XCOM Declassified, back into the spotlight, but the game had been completely changed. It was now a third person shooter that relied heavily on issuing tactical orders to your fellow agents. They also changed the look of the aliens to your typical big head, little body, generic extraterrestrial. ARE YOU KIDDING ME?! Iâ€™M FIGHTING ELVIS FROM PERFECT DARK?! (+1 if you know what Iâ€™m talking about)

I was crushed. That cool game I had seen back in 2010 had been dismantled and rebuilt into Mass Effect: 1960â€™s edition. Now, Iâ€™m not saying that I donâ€™t think The Bureau wonâ€™t be a good game; Iâ€™m a big fan of just about everything 2K does and Iâ€™m sure this will be a solid addition to their arsenal, but this isnâ€™t the game that I wanted to play. Where are my creepy blob monsters? Whereâ€™s that horrifying sense that at any second someone you thought was an ally would attack you because they were under alien control? Sadly, I donâ€™t think the day will ever come where I get to play that 2010 XCOM game that I fell in love with, but one can hope that The Bureau will somehow fill that void. I guess Iâ€™ll have to wait until August 20th, 2013 when The Bureau is released on PC, PS3, and Xbox 360 to find out.

3 people like this
Articles, Opinions
2kXCOMxcom the bureau declassified

SpawnCast Co-Host/Creative Co-Director Brian is member of the University of Mary Washingtonâ€™s class of 2012 and graduated with a BS in Computer Science. He has been gaming since the first day he held an original GameBoy in his hands and hasnâ€™t stopped since. He now plays mostly shooters and RPGs on his Xbox 360 but will occasionally work in some sports or fighting games when heâ€™s in the mood. He is also a huge fan of playing marathon sessions of Legend of Zelda when the opportunity arises.
You might also like
2k