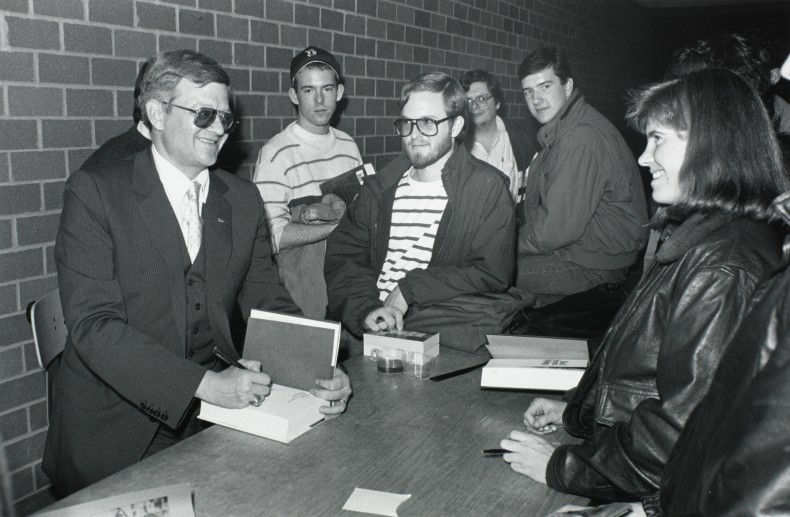 I wanted a different way in which to tell my stories.Â Coming up with concepts for computer games gives me another avenue of creative expression. It’s not just me telling the story, it’s me designing the idea for a story and letting the players write their own ending. — Tom Clancy interview with GameSpy

So here’s the thing: a lot of people are going to have a lot to say about Tom Clancy over the next few days, the next few weeks. Â They’re going to have a lot to say about Jack Ryan, aboutÂ The Hunt for Red October, about the fact that he has 17 best-selling novels and over a 100 million copies in print. Â They’re going to talk about his impact on the world of espionage fiction, and they should– because nobody else is writing American black ops fiction the way Clancy did. Â There’s no way to quantify the loss that his death is for the writing world, but there’s also no way to quantify the loss to the gaming world, where the phrase “Tom Clancy” is synonymous with tactical shooters, the genre he helped build. Â Sometimes Tom Clancy’s name feels like a label, a brand, a way to identify this breed of soda over the other one, and in a lot of ways, that’s exactly what he was, particularly in the gaming world. Â It’s impossible to quantify someone’s life once they die, and no one should try, but when you look at someone like Tom Clancy, and you’re me, writing for a video game site, the numbers are clear: So, yeah, that’s simplistic. Â First-person shooters existed long beforeÂ Rainbow Six, and “tactical first-person shooter” seems like a hair-splitting kind of genre definition, but there are some serious facts at play.

In 1996, Clancy and Doug Littlejohns, a British Navy submarine captain, founded a game studio, which in retrospect seems like of-course-they-did, but at the time was probably a little more like you-did-what? Â Clancy was by then a successful novelist already (Hunt for Red October was released in 84, andÂ Patriot Games in 82), which makes the decision to open a game studio even that much more perplexing– butÂ if you visit Clancy’s Wikipedia page, you’re greeted with roughly four billion game titles (okay, fifty one, but that’s still an absurd number) that begin with the words Tom Clancy’s. Â Â The only person (?) to have his name on a comparable number of video games is Pac-man.Â  Yeah, these games aren’t always good. Â They’re often significantly less-than (the PS Vita version of Rainbow Six Vegas has a Metacritic score of 60,Â Ghost Recon Predator 54, and the Wii version of Ghost Recon has a stunning score of 46). Â But they exist, they sold (and continue to do so), and they inspire the next round and the next round of intrepid young developers.

It’s hard to imagine any other writer starting their own game studio, especially someone with the bibliography Clancy could lay claim to. Stephen King’s Salem’s LotÂ (the first-person vampire shooter) and John Grisham’s The ClientÂ (classic Sierra-style adventure game, clearly) just don’t exist. Â Clancy, in some ways, was the cypher between fiction and games– and someone who clearly understood both. Â Game design is often derivative, and technology advances sometimes seem to be a function of What the Last Guy Did That I Need to Do Better. Â It’s how we get better and better games– and it’s why we have the spiritual successors toÂ Rainbow Six, games likeÂ Modern Warfare 2Â andÂ Call of Duty: Black OpsÂ that outsell pretty much everything ever. Â Maybe it’s the rose-colored glasses that come standard-issue with someone’s untimely death, but it’s not difficult to trace the origins of the games that are making the gaming industry the powerhouse it is right back to a man named Clancy and a studio called Red Storm.

A good license wonâ€™t help a bad game, but it can give a good game the visibility it needs to be a breakout title. When we first approached members of the gaming press with demos ofÂ Rainbow SixÂ in the spring of 1998, they had no reason to take us seriously â€” we had no track record, no star developers, and no hype (O.K., not much hypeâ€¦). We were showing a quirky title with a less-than-state-of-the-art rendering engine in a very competitive genre. With much-anticipated heavyweights such asÂ Sin,Â Half-LifeÂ andÂ DaikatanaÂ on the way, having Clancyâ€™s name on the box was crucial to getting people to take a first look at the title. Fortunately, the game play was compelling enough to turn those first looks into a groundswell of good press that carried us through to the launch.Â — Brian Upton, Gamasutra,Â Rainbow Six Portmortem

Tom Clancy’s name isn’t likely to disappear from games any time soon. Â It carries a certain cache that is inseparable from the kinds of games that Red Storm, now Ubisoft Red Storm (to whom some credit is due on the critical and public darlingÂ Far Cry 3), will continue to produce as long as they keep making money.Â Â So I’m going to posit something– because I can, because the man died way earlier in life than people should, which is always going to be true, but we get to wallow in that a little bit today. Â I’m going to go out there on a limb and say that without someone like Clancy to take the mainstream fiction genre of military black ops and bring it to the gaming world, we might not have the games that are continually redefining the whole medium. Â Wait, video games madeÂ how much? people unfamiliar with the genre ask– and they ask it because of games like CoD. Â Clancy’sÂ The Division comes out some time next year– and it already looks great. Â It’s simplistic to say that we wish that Clancy could be around to see it. Â What’s more appropriate is to say that we wish he could be around to see all the future games that will bear his name– and to understand his legacy. Â And how much we have to thank him for.

Look, this is simple.Â The good old days are now.Â OK? The human condition today is better than it’s ever been, and technology is one of the reasons for that. Â — Tom Clancy, interview with Sarah Schafer (1995)

Former Staff Writer Alice is a novelist, Shakespearean actress, and gamer who once survived emergency surgery in Bangladesh, but still finds most video games more exciting. She still has recurring nightmares about Uninvited (from 1986) thanks to an early childhood playing games on an ancient Mac. She's played Mass Effect more times than most people should own up to and is eagerly awaiting her very own episode of Intervention, which will likely be the Best. Episode. Ever. She also occasionally speaks German, but only when it's most inappropriate.
You might also like
Rainbow SixArticlesFeatures