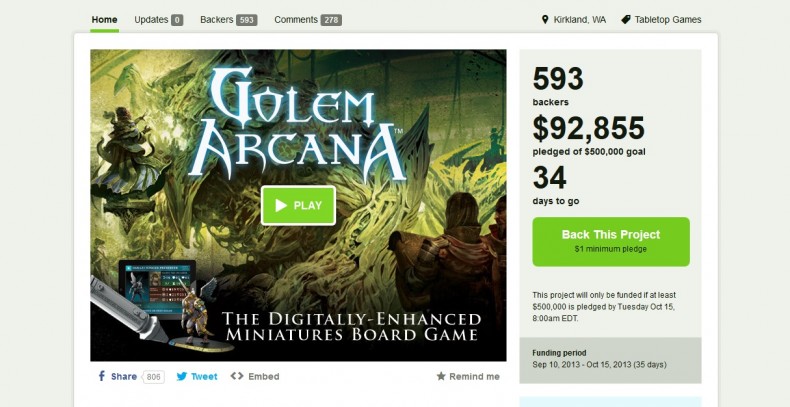 With an already well-received and critical hit with Shadowrun Returns, Harebrained Schemes has launched another Kickstarter campaign for their newest project, Golem Arcana.

“In short, Golem Arcana is a digitally enhanced miniatures game that eases play with pre-painted figures and an app that can be downloaded to iOS and Android smartphones and tablets that serves as the game’s rule book and referee all in one. Â Harebrained Schemes has created a TDI (tabletop digital interface) stylus that with one touch can identify a character and a region on the board, and via Bluetooth, display and track their characteristics and status on a mobile device through a mobile app. The stylus is the first seamless connection between the physical tabletop and the connected digital world, matching physical Golems on the board with virtual Golem Knights and Ancient Ones in the app.

By removing tabletop miniatures gaming’s long startup time, friction and other clutter, Golem Arcana lets players focus on the fun of sitting around the table with friends and family playing a strategic miniatures game with a deep story Â and complex gameplay. More info can be found at www.golemarcana.com.”

“Golem Arcana combines the Harebrained Schemes team’s two passions — digital video games and tabletop games,” said Jordan Weisman, founder of Harebrained Schemes. “We chose to bring this game to Kickstarter, because we love the personal connection we had with our players during the making of Shadowrun Returns. Â This direct connection and feedback motivates us, and helps us to make the best games possible. Â Over 600 people have already played Golem Arcana at GenCon and PAX this year and their honest reactions told us that Golem Arcana is an exciting leap forward in miniatures gaming.”

Harebrained Schemes is turning out to be quite the Indie dev. Shadowrun Returns, despite its minor flaws, is an exquisite game, and shows the true potential of what the development studio can accomplish. With almost a 100K dollars already collected, and a month left to hit their $500K goal, we here at SpawnFirst have no doubts that they’ll reach their objective in record time, and be able to fund and finish up the innovative Golem Arcana game to present to the masses. Game on, HS, game on…

Founder/Consultant Growing up in different countries, Karam has a unique global perspective about gaming. He brings with him that set of eyes and ears that can look at the state of gaming from afar. His gaming loves cover just about every genre, and he is a constant presence on Xbox Live and PSN. Karam is a Systems Administrator by day and lives in Georgia with his wife and three children. By night he transforms into Aye Karamba (Live) or Aaqiloon (PSN), and his virtual aliases live online.
You might also like
harebrained schemesKickstarter