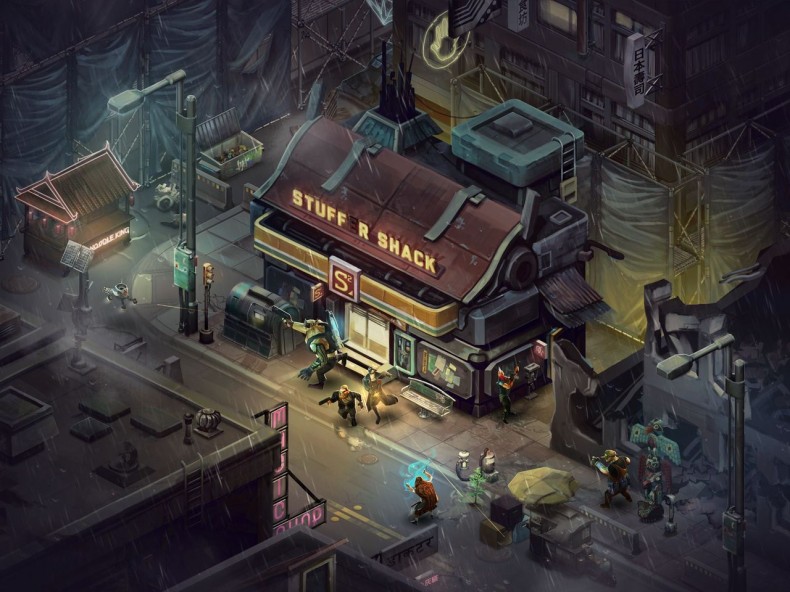 Lengthy text boxes can tax your concentration levels on long sessions, Combat is quite slow paced,

Shadowrun returns lives up to its predecessors. It balances fun gameplay with an interesting story, attractive visuals and nostalgia-inducing sounds. It's a game with twists, turns and downright "what now?" moments, all thrown in. Shadowrun Returns needs a little time to learn it, but it'll reward you with hours of fun.

Shadowrun Returns. Evolving from the deep and popular role-playing game, four iterations of video games, and countless novels in between, Shadowrun is back with its true essence of tech and magic, thanks to developer Harebrained Schemes. The project itself gathered a more than significant amount of interest in a kick-starter exercise, not only racking up its funding goal of $400,000 in a mere 28 hours, but also an additional 1.4 million dollars in funding support. A game from an amazing pedigree and with proven droves of support, a game born for, dare I say, greatness?

The game itself is set deep in the rich Shadowrun universe, and portrays the last Shadowrunner from a Detroit-based faction, who’s on the hunt to find a killer of a fellow ‘runner. The story has a lot to say for itself, and by that I mean there are a lot of text boxes with descriptions, speech and even storytelling in them. Now this is both a positive and a negative: it gives you loads of info and gets your immersion levels buzzing, but aside from the super-retro feel, it sometimes leaves you wishing for a cut-scene. I mean, yeah, okay the game is pretty retro-based and uses an isometric view to further this image, but as the saying goes â€œendless text makes easy play, notâ€ â€“ paraphrased of course. Aside from that, the game’s story winds through a twisted murder case triggered by a fellow runnerâ€™s untimely demise at the hands of a killer. Once the player gets involved however, the plot’s revealed to be a lot more than it initially seems. I wonâ€™t dive into the details, because well, buy the game and find out, dammit!

The concept in Shadowrun, however, is something I will go into a little detail with. I love the cyberpunk aesthetics and found it a very interesting atmosphere for the game, so in that respect I was sold. Its execution within the game is damn near flawless and the representation of Cyberpunk-Detroit was immaculate. The setting is a largely dystopian society where meta-humans and humans co-exist in uneasy circumstances, at best. This amalgamation presents the player with good customization options and conversational perks/nerfs. It also opens the world up to magic. Yeah, thereâ€™s magic.

The gameplay is split into two different parts. There’s a â€œfree-roamâ€ mode where you can go wherever you like and interact with various people/objects to your heartâ€™s content, and a tactically sound combat mode, with turn-based combat, movement points and things of those nature. So about turn-based combat, yeah, I’ll groan about it in most games, but in this one: not so much. Everything you need to know is covered by the tutorial and it’s a simple system to use in general. Based on points, you get two points to use in combat for you and whatever companion(s) you have with you. These points are used for movement, reloading, shooting and healing. Simple, yes? Good. If I had to nit-pick about it, the only thing I would say is that the less forward-thinking player will definitely struggle in most later stage engagements, as planning is an absolute must. From the guns to the skill points, you need to work yourself into a specific play-style early on to have a decent chance of winning battles and optimizing tactics. While weâ€™re on that, the skill tree itself is pretty easy to use but at the same time pretty damn big. It enables you to throw conventional classes right out the window and have a truly custom character you can call your own. Awesome.

The movement is a little â€œRunescapeyâ€/â€Path of Exileyâ€- which I love to be honest; mouse click movements are brilliant in games like this, and myself being a strategy fan, I am perfectly at home with this. You can easily navigate the map as it gives you good control over your character as you’re essentially way-pointing them to their destination. The combat is also deep and engaging, with cover options available, movement costs, etc.

The graphics in Shadowrun Returns are based off the isometric camera angles that give in-game objects that good ol’ 2.5D feel. It feels and plays vintage, staying true to its heritage. The graphics themselves look good, do the job well, and are not intensive to run. They support all the okay to good resolutions that us cool kids use these days, so you wonâ€™t be disappointed if you were expecting crisp, fresh looking graphics.

The in-game audio/sound is good quality and provides a decent atmosphere for the game. The music is a good homage to the precursor Shadowrun SNES game, which is unsurprising as they had the same guys work on the music for Shadowrun Returns. Both sound and graphics live up to the rest of the game and pull their weight admirably. I have to hand it to Harebrained Schemes; they created the perfect combination of classic (yet updated) graphics, new gameplay features, and reverent music. Shadowrun will not disappoint long time series fans.

That isometric angle…brings shivers down my spine!

Well I know I gave the text based â€œdialogueâ€ a hard time earlier, but there is a redeeming feature in the very same thing that annoyed me in the first place. Thereâ€™s a description of how a character is reacting and behaving throughout the conversation that gives you a comprehensive view on the character’s state of mind. These small paragraphs are all really very well-written and paint a brilliant picture of the game’s story, its aura, and its mythology, better than any graphics engine could. So kudos for that, devs.

Shadowrun returns lives up to its predecessors. It balances fun gameplay with an interesting story, attractive visuals and nostalgia-inducing sounds. It’s a game with twists, turns and downright “what now?” moments, all thrown in. Shadowrun Returns needs a little time to learn it, but it’ll reward you with hours of fun.

Former Staff Writer Fraser enjoys long walks on the beach, and doesn't like rude people. He also plays a ludicrous amount of games on both PC and PS3 and is Studying Computer Games Development at college in Scotland, U.K., and of course games journalisming with these fine fellows you see above and below. His wallet fell seriously ill in 2009 of a Steam Sale and has never recovered since, leading to many, many games. He has high hopes that he can suitably inform and entertain many of you fine people, and play a part to make SpawnFirst-a great website, even better. As ever, feel free to add his steam account.
You might also like
harebrained schemes