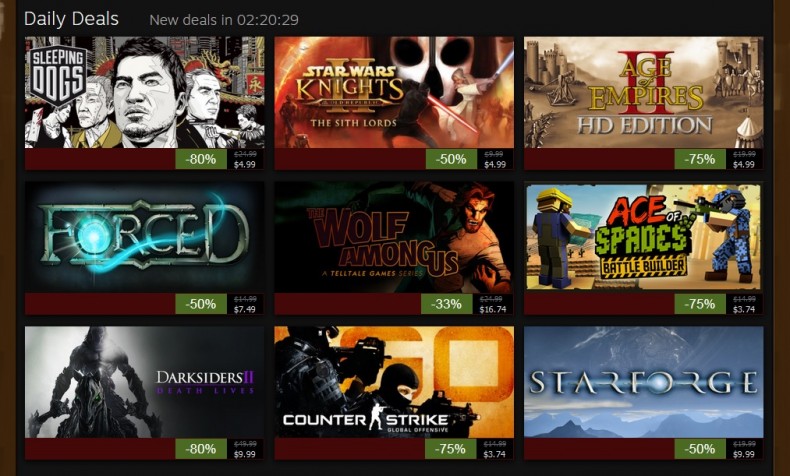 It’s only our fourth day into the Steam Holiday Sale and my wallet is already in tears. Between this and Christmas shopping, I’ll probably be skipping a few meals in the coming days. Luckily, I’ll have a huge number of new, freshly discounted games to feast on.

Sleeping Dogs, one of my personal favorites of last-gen, is just $4.99 today; an absolute steal for one of the best open world games of the past few years. Other deals include big discounts on Darksiders 2, The Wolf Among Us, Knights of the Old Republic II and more. Here’s a full list of the new deals:

These flash deals are ending soon, so jump on them while you can. If you somehow haven’t picked up Deponia yet, you now officially have no excuse.

I always get giddy when Steam sales go on, though I should probably learn to let some deals pass. All it seems like I’m doing is adding more bricks to an already near-insurmountable wall of games. Still, I can’t help but slip into the “buying just one more game can’t hurt” mentality. Oh, well. Here I come, impractically large backlog!

What games have you added to your collection thus far? What games would you like to see on sale? Let us know in the comments.

Senior Staff Writer Colton Steury is a musician, writer, and fervent gamer who enjoys most any games, but is especially fond of RPGs, platformers, third-person shooters, and indie games. When he's not writing articles, composing songs, or gaming, you could probably find him eating potato chips and petting a cat. Generally, he is willing to accept potato chips/cats as currency.
You might also like
DealsHoliday SaleSleeping Dogs