Unfinished Swan Developer is Hiring for an Unannounced Project

Giant Sparrow has released some job listings for the studio’s upcoming project.

The listing asks for applicants interested in a Lead Artist or Game Designer position to contact the studio via e-mail. 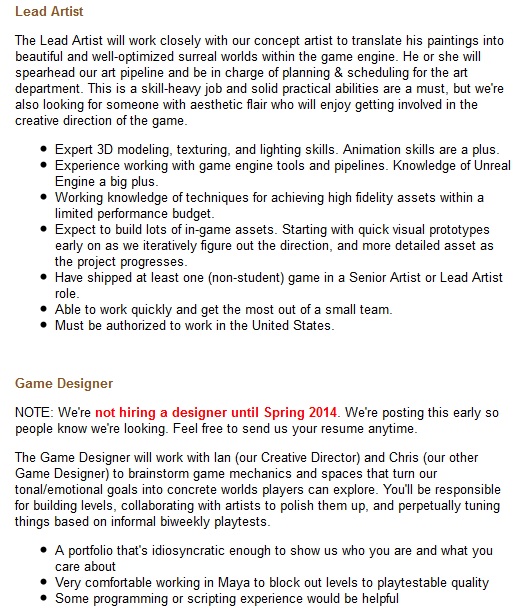 The studio’s upcoming project is the follow-up to the studio’s highly acclaimed debut, 2012’s The Unfinished Swan.

While little to nothing is known about the upcoming game, it was announced under the name Edith Finch only to have its name redacted and changed to “Unannounced Giant Sparrow Project.”

However, it can be assumed that the game will be a PlayStation 4 title as part of Giant Sparrow’s three game contract with Sony.

Senior Staff Writer Kenneth Shepard is a freelance video game journalist, the first human Spectre and an avid Coca-Cola enthusiast. When he's not sharing his opinion on the internet or saving the galaxy from certain death he enjoys sobbing hysterically over the lives of fictional characters . A student at the University of North Georgia, Kenneth currently writes about games for the University's newspaper.
You might also like
giant sparrowhiringPlayStation