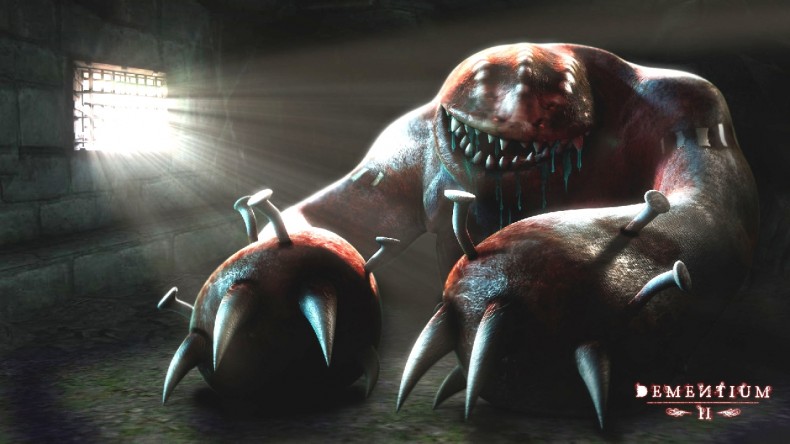 While it may not sound it, Dementium's gameplay is more meh than outright terrible and most fun will be had laughing at the bad monster design, environments, and story. What makes it even more funny, is the game takes itself seriously which I find to be endearingly cute; it's just like when Resident Evil first came out. Unfortunately the repetitive combat arenas and boring gameplay design aren't funny plus the full controller support is untrue.

Anyone looking for a serious survival horror or well-designed action game should look elsewhere. For those looking for an unintentionally funny experience, this is worth playing, though I would buy it when it's cheap. Very cheap.

An Asylum of Hilarity

In the world of entertainment media, most of the time a movie or TV show is considered to be either good or bad, but on a rare occasion, an anomaly occurs in which the entertainment is so terribly bad, that it’s good.Â  It tends to be even more of a rarity in the video game industry when a game has managed to receive this most dubiously, prestigious accolade, which Dementium 2 HD will be awarded today.Â  In all fairness, the gameplay isn’t that bad, but the poor attempts at story, horror, and creature design make for an unintentionally hilarious experience. Players take on the role of William, a patient at a mental institution, who finds himself thrown back and forth between the normal world and an alternate universe inhabited by ravenous monsters. Whilst trying to escape from the madness, William finds out early on that the cause of the horror is an evil, masked doctor who plans to destroy the world by summoning a demon to the realm of humanity for no apparent reason other than he is evil.

Stop me if I’m wrong, but doesn’t this sound like the exact plot of the original Silent Hill game? There is the possibility of William being completely off his rocker, and/or meds, meaning the alternate reality is a twisted illusion constructed by his broken psyche with the Doctor serving as a culmination of all his dark emotions.

This is a possibility, but the story never bothers to play on this idea at all besides a cheap, clumsy ending and within one sentence, I somehow managed to create a more compelling concept (looking for a scriptwriter Memetic Games?) Considering the developers’ inspiration is obviously the Silent Hill series, one would figure that the game would have significantly better story.

Dementium 2 was originally a game on the Nintendo DS which is more impressive considering how difficult it was to create a good FPS on such a unique handheld game device; on a more traditional platform, not so much. The core gameplay of Dementium 2 HD is fairly simplistic and harps back to classic survival horror games, just without the horror.

Standard FPS controls for PC are applied to the HD remake so it won’t take long to get used to the controls, though the crouch/duck walk will probably throw a few people off. From start to finish, the game is split entirely between combat and some minor exploration with combat being the main focus. Unfortunately, combat is repetitive and unbalanced making the game a breeze even on a harder difficulty.

Early in the game, players receive a prison shank and a revolver pistol which are actually the best weapons in the game. Using the shank, all a player needs to do is run around an enemy while pressing the attack button to show enemies the harsh reality of prison rules and win just about every fight, even the bosses. Or for those who are in a hurry, the pistol can be used to take down most enemies within three to four shots. To compensate for the gun’s power, the recoil is ridiculously strong making fire rate slower and causing the weapon to fly off camera, presumably into William’s forehead.

There are other weapons in the game like a shotgun, machine gun, and even a mystical boomerang relic that looks like it was designed by a kindergarten student who is a fan of Tool.Â  The machine gun is useful against the four cloned security guards armed with guns, but the shotgun is completely useless because of the minute damage it does to enemies. Considering it can only carry two rounds and has an extremely short range, a high damage output would easily balance things out.

The weapons don’t really matter since enemies aren’t very strong and are generally easy to kill; the only problem with the monster design is they are not scary. Monster design follows the basic archetypes of strong, slow, fast, close combat, long range, etc. but none of them are scary and are downright hilarious to watch.

The standard chest maw zombies very shakily shamble toward the player uttering a sound resembling a drunken Chewbacca and will fall down then immediately spring back up once hit with a weapon. I would say the Dementium zombies wobble but they don’t fall down, but I still think that phrase is under copyright. Other enemies include flying heads that scream and cry obnoxiously, bargain brand Half-Life headcrabs, various generic ghosts with glowing eyes, and my favorite, a mutant dog that farts acid and laughs.Â  That’s correct, there is a creature that farts acid, laughs hysterically, and even barrel rolls upon taking damage; bosses aren’t much better.

Bosses are the basic horror game arena fights, but with horribly designed creatures; the first being a large close quarters beast that resembles the combination of the monster from Little Shop of Horrors with a shark attack victim.Â  Another is a zombie witch that flies across the screen exactly like Mortal Kombat‘s Raiden.

The game does try something different in which one boss chases the player across a trap-filled hallway, but the creature is extremely slow making it very easy to get to a safe distance and get in a few pot shots. Many areas of the game follow the same design as the bosses in which players will have to fight against a set number of enemies to unlock a door; this is a big no-no in horror game design.

A good horror game give players the option to run like hell alongside the option to fight, but Dementium throws the player into one combat arena after another. They are barely arenas at all with some spawning in a single enemy at time which is just boring.

To add the final nail in this coffin, the game’s environments are littered with tons of ammunition and health kits while the save points restore health throwing all challenge and tension right out of the cuckoo’s nest.

Considering this came off an old DS game, this game doesn’t look good, but it could be significantly worse. I don’t care about graphics some much as I do the art direction which just happens to be between generic and atrocious. As it was established earlier, the monsters look like Clive Barker’s E-team of monsters, F-team was already used for Jericho, while the atmosphere is bland and generic.

Asylums are common in the horror world which fulfills its purpose in the game, but the alternate realities are like a goofy version of Silent Hill’s.Â  I also noticed that the developers wouldÂ  place a skull in random areas like the Predator alien was pulling out all the stops for Easter this year; ooh scary.Â  Art design is only limited by one’s imagination, so when the designer is creating a horror game like a grade school teacher decorates their desk for Halloween, there is a problem.

Sound design is the same way in which the game contains some surprisingly good music tracks with laughably bad sound effects.Â  The music would get more praise, but the fighting music turns on when entering a room containing an enemy ruining any surprise. The only bad issue I noticed, was Dementium’s incompatibility with a controller despite stating it has full controller support in the Steam store.Â  I tested out the controller, after completing the game because real PC gamers use a mouse and keyboard, and noticed that the commands wouldn’t always work.Â  Certain weapons couldn’t even be used while others worked perfectly fine and at one point, the controls failed for both the controller and mouse causing me to force close the program.Â  In short, stick to the mouse. While it may not sound it, Dementium’s gameplay is more meh than outright terrible and most fun will be had laughing at the bad monster design, environments, and story.Â  What makes it even more funny, is the game takes itself seriously which I find to be endearingly cute; it’s just like when Resident Evil first came out.Â  Unfortunately the repetitive combat arenas and boring gameplay design aren’t funny plus the full controller support is untrue.

Anyone looking for a serious survival horror or well-designed action game should look elsewhere.Â  For those looking for an unintentionally funny experience, this is worth playing, though I would buy it when it’s cheap, very cheap.

Former Contributor Chris West is a graduate of Texas Tech University where he earned his BS in Electronic Media in Communications. Chris has been passionate about games since he was a kid and today prefers games with a strong narrative. He also has a soft spot for horror games, legitimately scary games mind you, and any game claiming to be challenging, Dark Souls for example. When he isn't playing games, he is pursuing his other passions: music and photography. Chris can play both guitar and bass and then take high quality pictures of the performance with his camera. In the end, Chris enjoys writing about his passions and ideas, when he isn't destroying his friends in Call of Duty.
You might also like
horrorPCreview

A ‘Daylight’ Walkthrough by SlasherJPC