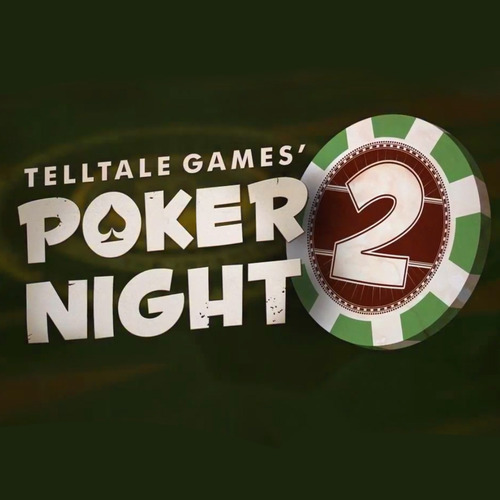 A crazy, spot-on cast; Tons of in-game and cross-game unlockables

Erratic opponent AI; Dialogue can get old quickly; No multiplayer

On one hand, Poker Night 2 is a below-average poker simulator. Inexplicably random AI moves will cause anyone looking for a test of skill to quickly throw in their cards and shove this game aside. On the other hand, though, Poker Night 2 is the best damn poker sim you're going to find; it captures the essence of sitting around a table with some buddies in a low stakes card game, where you're free to goof off and enjoy yourself.

Poker?Â  I Hardly Know Her!

Much like its predecessor,Â Poker Night at the Inventory 2Â suits a very specific audience. Â The two main draws of the game – the delightfully colorful motley crew of personalities that you play with, and the actual game of poker itself – cater to a very niche, fan-focused experienced. Â Even though Telltale Games is awkwardly stuck somewhere between a legitimate poker experience and a chaotic romp with hilarious characters, they still manage to come out on top with a refreshing title.

As one could reasonably expect, the entirety of the gameplay in Poker Night 2 hinges on playing cards.Â  You are given two different types of poker to play around with; the classic, two-card Texas Holdâ€™em, and the four-card variant named Omaha.Â  After choosing which youâ€™ll venture into, the tournament quickly gets underway, and you are given $20,000 to lie, cheat, and steal your way to a victory.

Once you finally reach the table, though, youâ€™ll meet the heart and soul of Poker Night 2; the ridiculous cast.Â  The hostile but lovable Brock Samson (from adultswimâ€™s Venture Bros.), mentally and electrically unstable Claptrap (Borderlands), Evil Dead badass Ash, and the goofy Sam & Max (from a series of the same name) all join you at the table for a high-stakes game.Â  Stealing the show, though, is Portalâ€™s GLaDOS, who makes a special guest appearance as your tournament dealer.Â  From there, each of the characters will criticize your every move and entertain themselves with ambient conversations and arguments, and this is where Poker Night 2 separates itself from other virtual poker simulators. 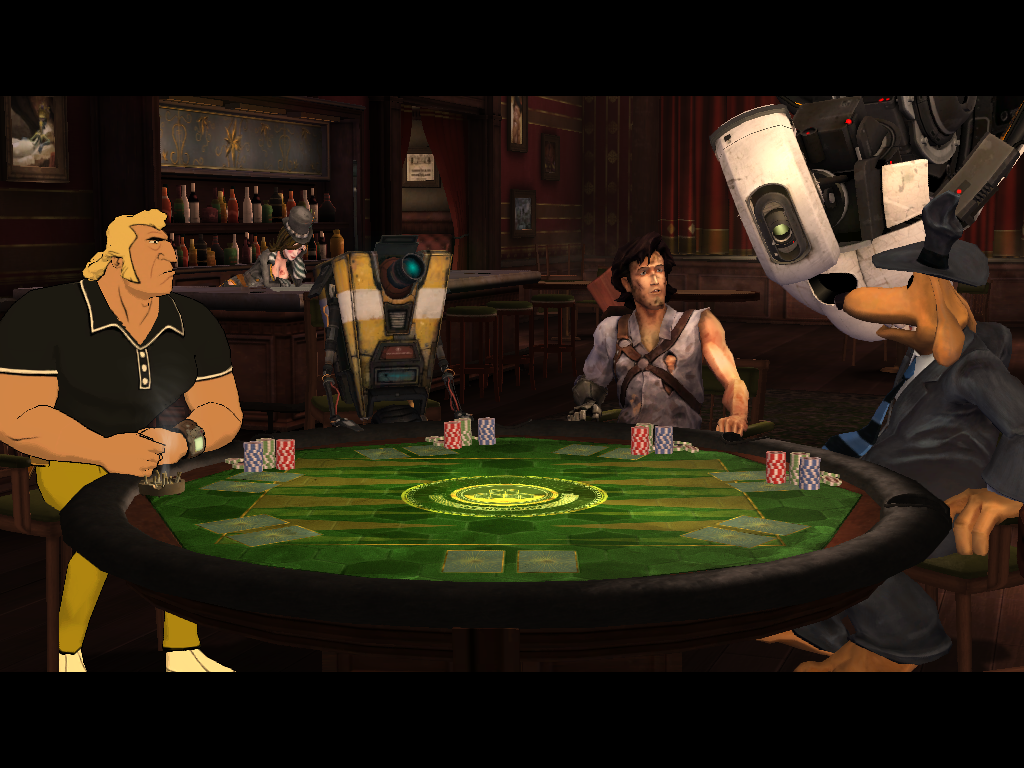 The cast of Poker Night 2 make the experience worthwhile

Whatâ€™s great about Poker Night is that, even if you are unfamiliar with the roster of characters listed above, you will hardly miss a step.Â  Each opponentâ€™s distinct personality bleeds through with every line of dialogue they drop, and youâ€™ll eventually grow to adore these characters in their own unique way.Â  Even though Poker Night 2 is about playing cards, the cast is crucial to the overall enjoyment of the game.

When I say â€˜crucial,â€™ I mean it in every sense of the word.Â  The actual â€˜pokerâ€™ portion of Poker Night 2 is a littleâ€¦ well, lackluster, to put it lightly.Â  This mainly hinges on the extremely erratic opponent AI; itâ€™s common to see players go all in on three straight hands, or try to steal $1500 blinds with an outrageous bet.Â  Of course, this makes an easy pick-up-and-play title for poker rookies (much like myself), but pros should have no problem winning at least every other tournament they enter into.Â  At the end of the day, though, itâ€™s still a game of chance; itâ€™s hard to completely destroy the base mechanics of a card game, and thereâ€™s still plenty here to keep both veterans and newbies entertained.

With the cell-shaded Claptrap, cartoony Sam & Max, and animated Brock Samson, it seems like the characters could never fit together on the same screen.Â  However, Telltale Games still managed to find a way to keep each unique art style, and it makes every player pop.Â  There are brief cameos like Moxxxi (Borderlands) and Doug (Walking Dead) that are sure to let your video game geek out, too. 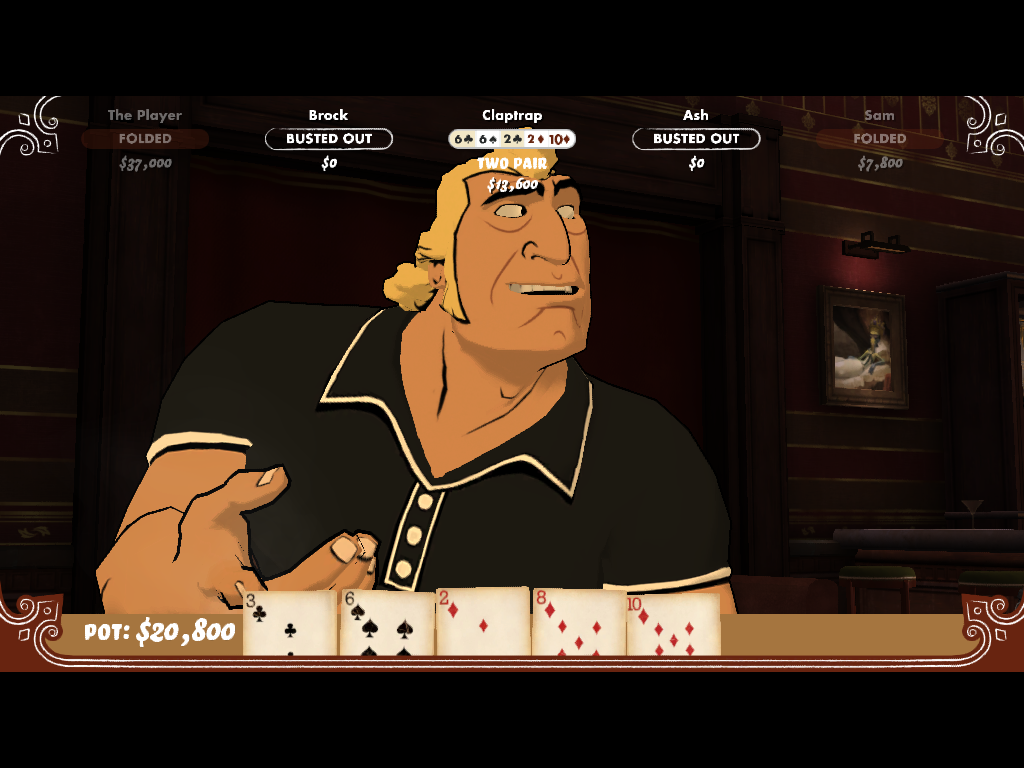 Characters like Brock Samson keep their own unique artistic style, making everyone stand out beautifully

The banter between the characters is charming, and the voice acting is top notch.Â  Even though the legendary Bruce Campbell wasnâ€™t enlisted to voice Ash, I was hardly left thinking that he didnâ€™t belong with the rest of the zany cast.

The biggest knock on Poker Night 2â€™s presentation is the frequency with which youâ€™ll hear lines repeated.Â  Each character has a set of one-liners to correspond with betting, folding, and such, and youâ€™ll hear these repeated quite a few times in the first few hours of gameplay.Â  These are easy to ignore, but larger sections of dialogue that play out across an entire hand are a little more irritating.Â  While you might fall in love with the clever back-and-forths, they definitely start to wear on you after theyâ€™ve played out two or three times.

The graphics are definitely unique, but that doesnâ€™t mean they are free of problems.Â  Each character has specific â€œtellsâ€ that attempt to create a realistic poker atmosphere and are meant to help govern the playerâ€™s betting decisions.Â  Due to frequent stutters in the graphics, though, itâ€™s often hard to pick out intentional jerks or movements.Â  It feels like mechanic that was left in the Telltale wasnâ€™t sure how to incorporate.

There is also a lack of multiplayer, which is disappointing.Â  Even though an online or local mode wouldâ€™ve likely eliminated the delightful character banter, it still wouldâ€™ve been a nice addition to tack on a few extra hours of gameplay.

Many of the players looking to pick up Poker Night 2 will be concerned about the cross-game unlocks.Â  This works on a pretty simple system; you are given three tasks known as â€˜bountiesâ€™ (which include things like â€œwin a showdown with a straightâ€) and, when these are completed, one of the characters will put up a special item.Â  Win these tournaments, and youâ€™ll unlock a bevy of prizes.Â  Note; Every system will receive Borderlands 2 skins as bounty prizes.Â  PlayStation users will also have access to exclusive themes, Xbox users can earn avatar items, and PC players will gain Team Fortress 2 accessories.

There are also a slew of decks, chips, and felts to unlock with in-game tokens, and equipping certain combinations will change the entire theme of The Inventory.Â  With all of the unlockables, thereâ€™s plenty of reason to come back; it just depends if youâ€™ll put up with the eventual repetitive conversations and braindead AI. 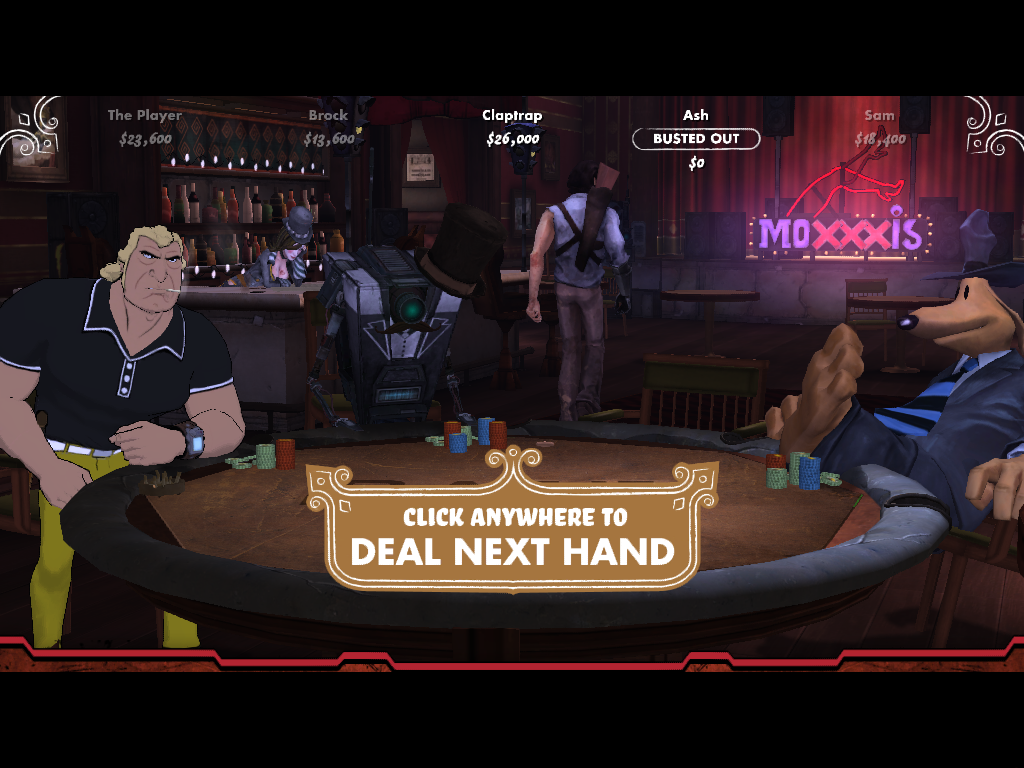 Equipping certain sets of the numerous unlockables change the entire theme of The Inventory. This game of poker really made me want to play Borderlands again.

On one hand,Â Poker Night 2Â is a below-average poker simulator. Â Inexplicably random AI moves will cause anyone looking for a test of skill to quickly throw in their cards and shove this game aside. Â On the other hand, though,Â Poker Night 2Â is the best damn poker sim you’re going to find; it captures the essence of sitting around a table with some buddies in a low stakes card game, where you’re free to goof off and enjoy yourself.

Former Contributor Nolan Alber is a college student from North Dakota. He enjoys rescuing puppies from burning buildings and beating up criminals on the streets, and often lies about his interests to make himself look better. Nolan is an avid gamer on PlayStation 3 and PC. He impulse-buys more video games than he can actually play, and is a fan of shooters and fighting games (even though heâ€™s terrible at the latter).
You might also like
PC ReviewTellTale Games