Ratchet & Clank: Into the Nexus Review 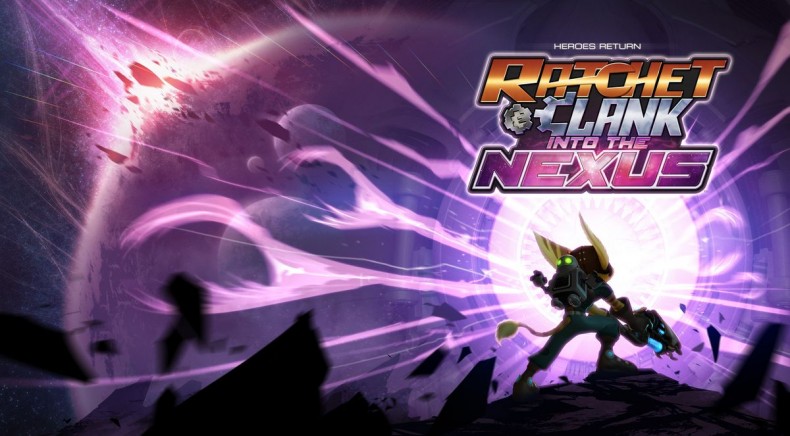 Great sense of humour; plenty of guns to play with; Quest For Booty bundled in for free

End boss; Over too soon/ends rather abruptly; ran into a few glitches that forced me to replay certain areas

Ratchet & Clank: Into The Nexus ends just when it feels like it's reaching its midway point. It is half the usual asking price of a normal retail release, hence the reason why it feels like half a Ratchet & Clank game. Still, though, it's a fun romp that lasts approximately 6 hours, and to make up for the missing six hours Insomniac have been kind enough to include Quest For Booty.

The PlayStation 4 is now out in North America, which means a new generation of gaming has begun. You can bet your bottom dollar Insomniac will make a next-gen Ratchet & Clank game somewhere along the line of the PS4’s life-cycle. Until then, we’re getting one last entry with Into the Nexus, which serves as a little goodbye present to the PlayStation 3. It costs half the normal asking price of a retail game, and subsequently is half the length of a usual Ratchet outing. It makes sense, and the price is justified, but even though I knew beforehand Into the Nexus was going to be a fairly short outing, I was still surprised at how abruptly it ended. It felt like there was still more of a story to tell/game to play, or at least that’s I wanted, anyhow. A sure sign of enjoyment when you’re playing a game is that you almostÂ don’t want it to end, but Into the Nexus ends at what feels like the midway point. If I could, I’d pay the extra $30/Â£20 to get the rest of the game.

Escorting villainess Zendra to her jail cell goes slightly wrong as her twin brother, Neftin Prog, invades the Vartax Detention Centre. All hell breaks loose and the inmates kept in Vartax escape, which conjures up memories of Batman: Arkham Asylum. You then have to get Zendra back to prison, but, of course, obstacles and enemies along the way seek to prevent you from doing so. It’s a simple affair, but it’s the witty writing and over-the-top cartoon-like characters that make Into The Nexus one of the funnier, more light-hearted games this year. The over-sized, dim-witted goon Neftin Prog gets the brunt of the laughs, with the interplay between Ratchet and Clank being as charming as ever. Zendra brings a certain moody and dark tone to the game, just like an infamous villain once did in the Crash Bandicoot series. Her motivations aren’t exactly made clear, but she looks and sounds evil, so I wouldn’t want to ask her. There’s familiar faces along the way to keep fans of the series happy too, but it’s Cronk and Zephyr that have more of a pivotal role in the story.

Into the Nexus is a Ratchet & Clank game all right, and with the exception of the end boss/end level, the run-and-gun gameplay the franchise is known for doesn’t get old (still, even after numerous installments in the franchise) thanks to a wide variety of guns to choose from. There are new guns that can transform enemies into harmless snowmen or project scary-looking plants to frighten foes, as well as standard weaponry like pistols and shotguns.Â Clank is even playable this time around, with a handful of 2D platforming sections that allow you to control gravity. [I removed part of a sentence here in which Scott said he didn’t think Clank would ever get his own game. Clank has already gotten his own game, Secret Agent Clank for PSP.] Clank’s segments are short and sweet for what they are. That may sound clichÃ©, but short and sweetÂ is exactly what Into the Nexus is.

There’s zero gravity elements, nether portals that glide you in the air from one place to another, a jetpack and glide boots that all keep the game feeling fresh. It’s nothing revolutionary, but Into the Nexus doesn’t try to be reinvent the wheel. It feels just fine, and knows its place. It seeks to remind us that Ratchet and Clank have still got it, and so have Insomniac. Into the Nexus is just a little taster to whet the appetite before we see a Ratchet & Clank on PS4 thatâ€”hopefullyâ€”does take the series to new heights. Having just played Quest for Booty, which released in 2008, I’m somewhat surprised it’s prettier than Into the Nexus. Although they both have two different art styles, Quest for Booty looks very polished for a five-year-old game. That’s not to say Into The Nexus looks bad by any means as each level/planet brings new environments to the table that all look consistently good throughout, but at no point does it really wow you. Sound-wise, the voice actors all knock it out of the park and bring a unique personality to their offbeat characters. Ratchet remains as heroic as a protagonist should, but it’s the aforementioned twins, Zeftin and Zendra, that particularly stand out. The soundtrack isn’t all that special, and I can’t say I remember any particular musical cues whatsoever. This could be chalked up to there being a lot of dialogue throughout though, whether it be Ratchet and Clank talking to each other, talking to friendly NPCs or listening in to enemy conversations and war cries.

During the second level, on Planet Silox, my game froze up twice and I had to reboot my PS3. Most annoyingly I had to replay a fairly large segment of the level because the freeze corrupted my save. Apart from these two random glitches the game ran fine. I didn’t encounter any other bugs whatsoever. As with any other random glitches like the ones I encountered, it could just be bad luck on my part and you may not run into them. If, like me, you passed on Quest for BootyÂ in the past, you’re in luck. It’s bundled in for free with Into the Nexus. This sweetened the deal for me, and it’s actually a bargain to be getting two Ratchet & Clank games for $30/Â£20. It’s tough luck if you already own Quest for Booty, though, I suppose. Regardless, it shouldn’t put you off a purchase considering Into the Nexus is well worth the asking price on its own.

Ratchet & Clank: Into the Nexus ends just when it feels like it’s really going places. It’s half the usual asking price of a normal retail release, and as such feels like half of what a Ratchet & Clank game should be. Still, it’s a fun romp, and to make up for the missing hours Insomniac have been kind enough to include Quest for Booty.