Titan Attacks! is great if you're looking for a great Space Invaders fix to kill time, especially on-the-go with the Vita version. However, it might not hold up so well on the console.

No, it’s not an Attack on Titan game, but it is fun.

If you’re ever in the mood to play Space Invaders, but for whatever reason don’t feel like playing the original, Titan Attacks! is the game for you.

The game’s premise is simple 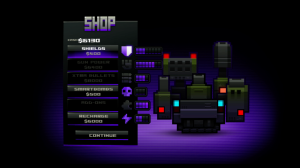 ; aliens, known as the Titans, are attacking Earth. You are a lone surviving tank commander, tasked with defending Earth as humanities last hope. What better way to save humanity than in the classic, side-scrolling, avoid-the-bullets style of Space Invaders?

Players are challenged with 100 waves that will take them from Earth, to the moon, and all the way to the Titan home world. There are five sections, and each section ends with a boss, followed by travelling to a new planet. After each round, you’ll have a chance to upgrade your tank or buy health and smart bombs. Smart bombs do exactly what you think they do: clear the entire screen of enemies. With upgrades, you can get extra bullets, gun power, gun recharge rate and extra guns.

Towards the end of the 100 waves, depending on how you spend your points, your tank can be loaded with five guns, made up of three main cannons, a missile launcher, and a laser. All this firepower paired with maxed out bullets, gun power, and recharge rate can make you feel a tad overpowered. However that only lasts for a few waves until the screen is literally filled with so many enemy types you make not be sure what the hell is going on.

Although the game was challenging at times, overall it was not terribly hard. I only actually died once before completing the full 100 waves. After you beat the first 100 it sends you back to wave one, calling it wave 101. Oddly enough, you keep all your upgrades and all the enemies are just as easy as they were from the start, it’s essentially a new game+.

I did have a two issues with the game. 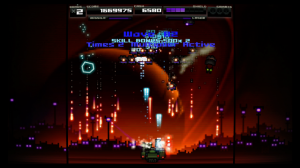 My first, and probably biggest, gripe was the sound the missile made when it launches. It is quite possibly one of the most annoying game sounds in recent memory. Seriously, if you get a chance give it a listen. There’s a nice soundtrack, nice-sounding laser beams being shot back and forth, then suddenly WHOOSH from a missile. The sound it makes is similar to the sound speakers make when they’re about to blow out.

Another issue with the game dealt with hit detection. Occasionally, bullets would not connect on me or my enemies. I watched a few bullets go straight through my enemies and I, and do absolutely nothing. This could be a good or bad thing depending, but it wasn’t too bothersome at least.

Overall, the game was very fun and acted great as a time-killer. Wait for the price to drop a little before grabbing it, since you can blow through it in not even an hour. But it’s value might be a little better on the Vita, where you can have it on the go for a long car ride. While the game can present some challenge in the final 20 waves, don’t expect to see the “game over” screen a lot. 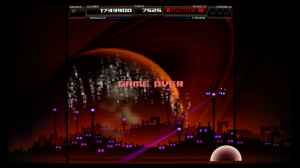 Titan Attacks! is a great indie title and Space Invaders clone, while not seeming like a bad knock-off. It’s fast-paced, fun and isn’t too challenging to the point of frustrated. However, this can be a turn off for gamers looking for a challenge. This game is a little pricey for a short console game, but has a lot more value as a Vita title. It’s great for an on-the-go time kill.

Matt is a writer, movie enthusiast and above all else a gamer. Raised by werewolves, he has managed to (somewhat) integrate with society. He is currently attending Shippensburg University for Communication/Journalism with a Public Relations emphasis. After a three-year run at GameStop he finds himself here, doing what he loves. He mostly deals in RPGs, action-adventures and indie games, but he will play nearly anything. Chances are you will catch him playing the Mass Effect series for the hundredth time.
You might also like
curve studiosPS Vitaps3