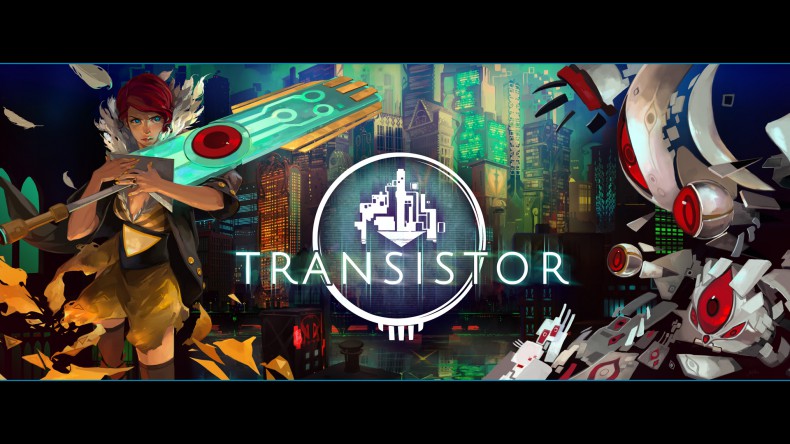 All in all, Transistor is an excellent game with amazing aesthetics, commendable audio-work, and engaging, addictive gameplay. I couldn't recommend this game more to anyone who owns a PlayStation 4 or PC, especially if you love Bastion as much as I do.

Supergiant Games, creators of the highly acclaimed title Bastion, bring us another unique and fresh experience in their latest action-RPG game, Transistor. Transistor drops you into the world of Cloudbank, where every location and structure is analogous to computer circuitry, and every action deftly mirrors programming functions.

You play the role of Red, a famous singer living in the tech-noire Cloudbank, with nothing but silent emptiness surrounding you. As the story progresses, you find that your once powerful and lustrous voice has been stolen from you, leaving you completely incoherent. Along the way, you discover the Transistor, a powerful and mysterious weapon that holds the key to your salvation.

Can you please explain the significance of the Transistor sword? How does it tie into the story?

“The Transistor is this mysterious weapon of extraordinary power. It’s not an everyday sight in the city of Cloudbank. It has a variety of unusual properties that are revealed through the course of the game, and both from a gameplay and narrative standpoint we hoped players would constantly be discovering new things about it. The Transistor is inspired by legendary weapons in other fiction, those all-powerful artifacts that grant great power to their bearers, though perhaps at some cost. The story of the game very much revolves around the weapon, and the protagonist Red’s relationship to it.” – Greg Kasavin, Creative Director

As Red starts making her way through the empty city of Cloudbank, she’ll encounter robotic enemies known as the Process, who are hellbent on destroying you and recovering the Transistor. You see, considering the Transistor’s extraordinary abilities and untapped potential, it’s a highly-sought after prize that the Process want to retrieve for their masters, the Camerata. You’ll journey through Cloudbank, district by district, combating the Process, all the while trying to unearth the mystery of exactly why Cloudbank has become so barren and lifeless. 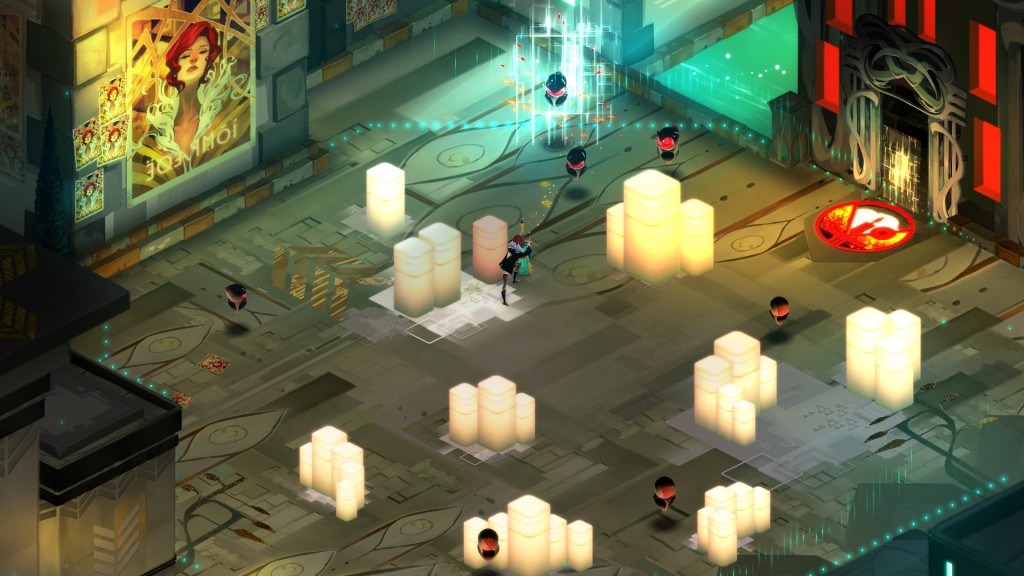 Red’s progression through the story is narrated by the Transistor itself. The weapon not only serves as a vehicle for destruction, but also as a companion to Red. As the game wears on, the player will start noticing the sometimes poignant connection that Red and the Transistor seem to develop. This is accomplished with great effect, contrasted against the bleak and desolate surroundings of Cloudbank. If you enjoyed the narration in Bastion, then you’ll feel right at home with Transistor. I’m glad that Supergiant Games decided to bring back Logan Cunningham, as his deep, frontier-ish voice seamlessly meshes in with the world of Transistor.

The Transistor has the unique ability to stop time, giving Red a chance to plan out her attacks more strategically. All the battles in Transistor play out this way, and it’s an enjoyable experience planning out attacks during the Turn() mode. I often found myself canceling my current Turn() and redoing it, in the hopes of achieving a bigger combo or dealing more damage.

Where did you draw influences for the “Turn()” battle system? Additionally, is there any significance to the “()” in everything you use?

“Turn() is the name of the strategic planning mode in Transistor, which was designed to bring some of the pleasures and drama of classic turn-based games and tactical RPGs into the immediate and action-packed feel of an action RPG. We love classic games like Baldur’s Gate, where you can pause the action and issue orders, and wondered if we could more deeply integrate this type of idea into the moment-to-moment play. We wanted the system to feel very open-ended, like a tool at your disposal rather than something you were forced to use all the time. The parenthesis as part of the name implies the syntax of computer functions, hinting at the nature of the Transistor’s power.” – Greg

As you defeat more of the Process and move through the story, the Transistor will gain new abilities and functions through absorbing souls. Red accesses these abilities by setting up utility points which you can mix and match in order to gain a strategic edge in combat. There are four abilities that Red will use through the Transistor. Crash(): a close-ranged, overhead attack though the Transistor, Breach(): a beam of energy thrown straight at the target, Jaunt(): a short-ranged, melee attack preceded by a dash, and Spark(): an area of effect attack, damaging enemies caught in the radius. 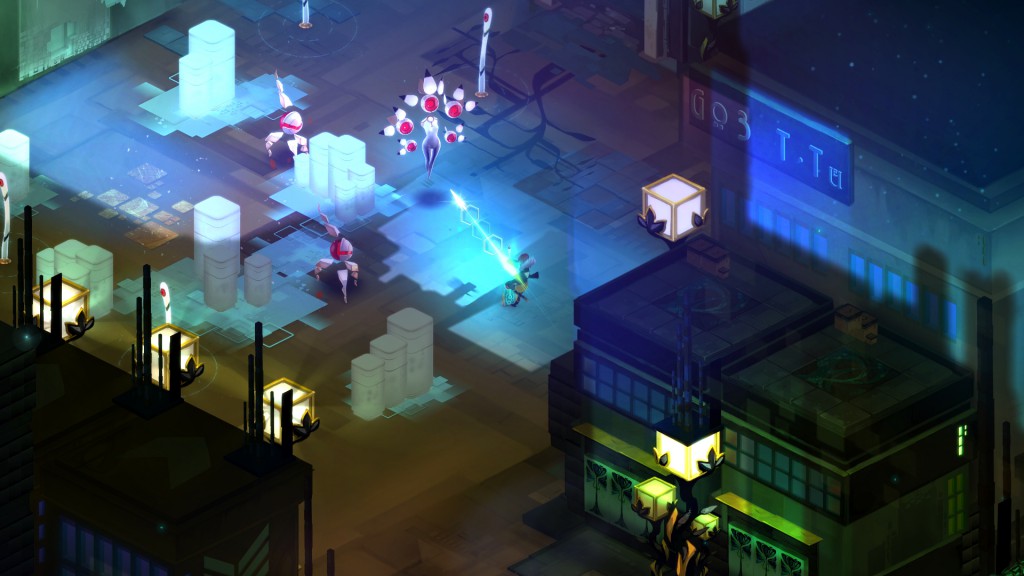 These abilities can be upgraded or combined with different functions that will alter the ability’s stats. If you were to add the Bounce() function to Breach(), then that beam of energy would ricochet off enemies and other surrounding structures. This adds a level of strategy that you can tailor to your play-style.

I noticed that Red has an abundance of powers available to her. Is the gameplay structured so that we get to experiment freely with these abilities?

“We very much wanted for Transistor’s gameplay to have a freeform feel to it, where the breadth of your powers keeps growing almost at an exponential rate, giving you lots of room to experiment. While you can stick with what works if you want, there are systems in place to gently encourage you to try things you haven’t tried before, which hopefully will cause you to discover interesting new function combinations often. There are thousands of such combinations possible so this was a really big part of the game to us, and we’re excited to see what players do with it!” – Greg

A minor pitfall with the game is that the voice from the Transistor is too low in comparison to everything else happening. There were times I found it difficult to catch what was being said and I would never know if it was important or not. Like at a loud party, all I could do was laugh, nod my head, and say “yeah”. Along with this, Transistor  sports a steep learning curve in regards to to the abilities and functions of the Transistor weapon. The only way to really learn how it all works is to guess and check. This leads to some difficult battles if you end up with a poor combination of functions and abilities.  It would be nice to know ahead of time exactly what you were creating.

The beginning stages of the game are a bit confusing as you gradually learn the functions and abilities of the Transistor, and how to use these abilities effectively. However, moving forward in the game you will see everything, even the small details, fall into place. Transistor is an enigmatic adventure in a stunning, noire-like town. You and the Transistor are left to find out what happened all the while staying away from The Process – trying to survive, unravel the mystery, and escape from this desolate world.

All in all, Transistor  is an excellent game with amazing aesthetics, commendable audio-work, and engaging, addictive gameplay. I couldn’t recommend this game more to anyone who owns a PlayStation 4 or PC, especially if you love Bastion as much as I do.

Avid hockey fan & lover of the Chicago Blackhawks. Most of my time, when I am not trying to figure out who Tyler Perry is, I am gaming, working, learning, watching hockey, or spending the day with loved ones. I believe in greatness from small beginnings. PSN: http://psnprofiles.com/darlingharbour
You might also like
bastionps4Transistor