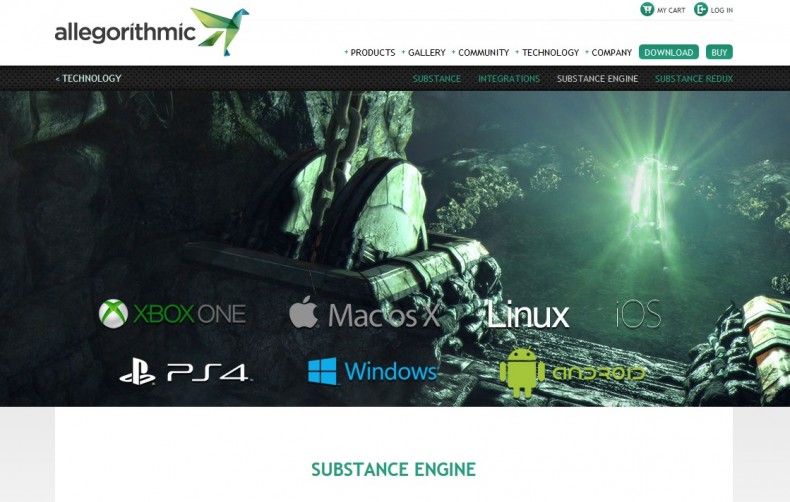 Allegorithmic’s Substance Engine is a middleware engine that is easily applicable on a variety of platforms. Recently, as mentioned on NeoGaf, a recent benchmark study was done using the Substance Engine to test out how well the PlayStation 4 and Xbox One handle the strictly computational CPU (not system/video memory or GPU) loads.

The benchmarking was done testing DXT (DirectX Texture Compression) texture generation speed on one CPU. The results showed that the PlayStation 4 can generate 14MB/s of textures, while the Xbox One can output 12MB/s of textures.

“Both systems have 8 core Jaguar based CPUs from AMD, but prior to release Microsoft was promoting the fact that their CPU was clocked higher at 1.75Ghz. The benchmarks here imply the PS4 CPU is actually running at 2Ghz in order to produce 14 MB/s versus 12 MB/s for the Xbox One. The other possibility is that these figures are for the whole CPU and not a single core as labelled. In that case it would imply PS4 is using 7 cores at 1.75Ghz versus 6 cores at the same frequency.

Since this tech is purely algorithmic on CPU and not bound by bandwidth we can’t look to the PS4’s GPU or GDDR5 to explain the difference. The only logical conclusion is the PS4 has a faster CPU, despite Microsoft’s protestations to the contrary. Sony has never officially disclosed the PS4’s CPU clockspeed.”

An interesting hypothesis, to be sure, but we would suggest on waiting for more official benchmarks and conclusions to be gathered before making an official statement on the matter of which console actually has the faster CPU clockspeed and processing power.

Founder/Consultant Growing up in different countries, Karam has a unique global perspective about gaming. He brings with him that set of eyes and ears that can look at the state of gaming from afar. His gaming loves cover just about every genre, and he is a constant presence on Xbox Live and PSN. Karam is a Systems Administrator by day and lives in Georgia with his wife and three children. By night he transforms into Aye Karamba (Live) or Aaqiloon (PSN), and his virtual aliases live online.
You might also like
NeogafPlayStation 4ps4

NBA 2K14 and Dead Rising 3 DRM Checks on the Xbox One?