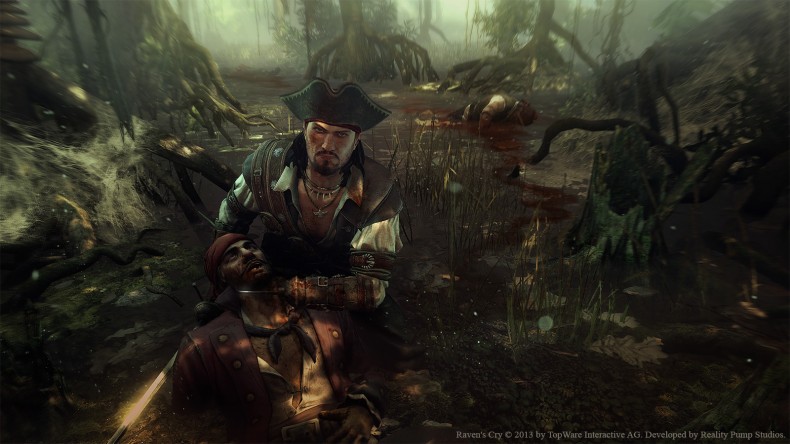 They also have a snazzy new website that shows you everything you need to know about the game. From how to buckleswash your way through the life of main character Christopher Raven, to side quests and extra content.
Oh, I should mention that the main story line is a whopping 25 hours long! WOW

It seems that with current features in the game, you will be able to see changes in enemy A.I depending on how to play and fight. Making them more aggressive or tame for instance. Notoriety effects your skill trees, which is interesting to see how they will incorporate that. You can level up your raven to do more than be a bird. Hopefully eye plucking goodness will ensue.

OH! Wet pistols will not fire, and the environment could restrict movement in hand to hand combat. Speaking of hand to hand combat, it seems to be a combination of freeflow combat (counter, stab, parry, thrust, repeat.) and hack and slash gameplay. Should prove interesting.

See you on the high seas gamers!

Here are some bonus screenshots of the game itself:

Staff Writer Luke "FoxJester" Cobham can be seen in the wild helping other folk with their various plumbing problems and disasters. Commonly you will see him wade into a vast sh*t storm in order to save the others drowning within. Less frequently seen however, is when the majestic FoxJester is hidden in his man cave playing numerous video games, or beating people senseless with large bladed weaponry, in which he has been training with since 7 years of age. Video game Journalism however, seems to be this creatures true calling, throwing news, opinion pieces, and reviews at Spawn First as if he were a crazy poop throwing Jabberwocky. Oh, and he's Canadian.
You might also like
PCPirateps3