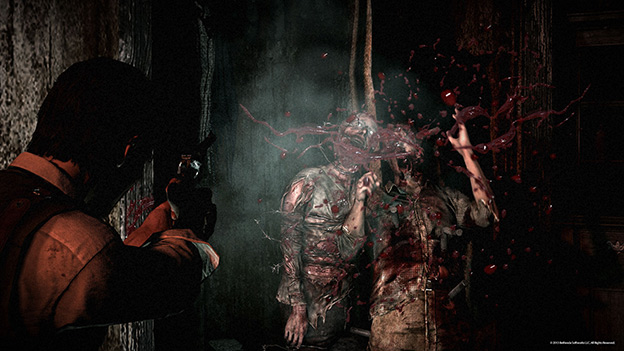 In an interviewÂ with OXM, Shinji Mikami has stated that there are multiple ways to play the game. He states that players can choose to play stealthily, set traps, or use firearms. The firearms in the game are traditional; “nothing fancy,” he says. One can assume it’s possibly just the handgun Sebastian has throughout the game or maybe he finds something slightly more powerful through the story progression but nothing too overpowering.

He also stated that the game has multiple types of traps. However, Sebastian isn’t the only one that can set traps. The player can stumble upon traps set by the enemy in the game and can disarm them. You can set a trap down and hide to watch the turmoil unfold or wait for the trap to activate and then make a break towards safety. The traps can be used at any time throughout the game. You can also choose to play stealthily. Hiding in the shadows and awaiting the right moment to sneak past the enemy seems to be a crucial component to this game if you want to survive; especially in areas of extreme danger, which Mikami states there are areas that are “really dangerous, where you feel danger” and areas that “you don’t feel that so much, so you can relax.”

It’s great that there are 3 different ways to play this game. Mixing and matching should make for a unique experience. No release date has been announced yet for the game, but it is still slated for a 2014 launch on PC, PlayStation 3, PlayStation 4, Xbox 360, and Xbox One.

Former Editor-in-Chief Angie has a passion for gaming. She has never been able to put the controller down since first picking up an SNES controller at the age of 3. She loves researching anything gaming related and talking games amongst her friends.
You might also like
BethesdaShinji MikamiThe Evil Within