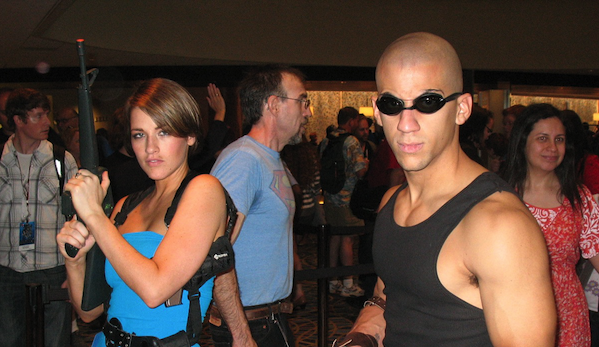 I and my laconic but charming cameraman (my brother, Edward) set ourselves a task: find the very best of video game cosplay at Dragon Con 2013. Â Many came, few were chosen.* CHELL, PORTAL (and Wheatley!): She was actually our first picture of the Con, and she said to us, “Find me tomorrow, I’ll be Lara!” Her friend offered up Wheatley in the background. Don’t worry– we saw them again the next day. She was Lara; he was Indy, sans sleeve. HALO: These guys didn’t want to give us a picture at first (they were battling their way to the food court), and then one of them turned to me and said, Will you plug our Kickstarter? Sure, I said.

Check them out here. KRATOS, GOD OF WAR: This guy was pretty amazing. The arm additions were clearly exhausting him, but when we asked him for a picture, he wanted to do two rounds– to make sure he got the best shot. ELIZABETH AND BOOKER, BIOSHOCK INFINITE: They did two pictures with Ted– the first one was all smiles. They wanted to do it again– and got this perfect shot. BORDERLANDS: Nothing like stopping people on the corner of the street, but these guys humored us and looked great doing it. CONNOR, ASSASSIN’S CREED: We saw a lot of Assassin’s Creed, but something about this guy just nailed it for us. Maybe it was his inscrutability. DEADPOOL, DEADPOOL: Deadpool costumes make up about 30% (our math) of the Con, but you always remember your first. DIABLO III: This guy gets major street cred for a) level of detail and b) level of heat tolerance. GARRUS: MASS EFFECT: This costume is just awesome– and everyone loves Garrus. KATAMARI DAMACY: The level of commitment here is legit. LARA: TOMB RAIDER: The best Lara we’ve seen so far. She was standing in front of the Diablo III screen when my intrepid cameraman tried to take a picture. They moved and got this awesome shot. LIARA: MASS EFFECT: My biggest girlcrush. And she looked amazing. PORTAL: My personal favorite of the whole Con. She was so excited to have her picture taken, and she was enigmatic when we asked her if the cake was a lie. Well played, Portal Girl. SILENT HILL: Pyramid Head and one of the nurses is a match made in, well, Silent Hill. These guys looked amazing– and provided much nerd ‘shipping love fodder. SEPHIROTH, FINAL FANTASY: Look at the height on that hair, come on. SHEPARD, MASS EFFECT: Because nobody rocks a party like a woman in N7 armor. NURSE, SILENT HILL: We didn’t ask her to pose, but she rocked it. FALLOUT 3: A Con party without a Vault Dweller ain’t no party at all. ELIZABETH AND BOOKER, BIOSHOCK INFINITE: There are a whole bunch of short-hair Elizabeths at Dragon Con, very few short-hair. These guys looked great.

Former Staff Writer Alice is a novelist, Shakespearean actress, and gamer who once survived emergency surgery in Bangladesh, but still finds most video games more exciting. She still has recurring nightmares about Uninvited (from 1986) thanks to an early childhood playing games on an ancient Mac. She's played Mass Effect more times than most people should own up to and is eagerly awaiting her very own episode of Intervention, which will likely be the Best. Episode. Ever. She also occasionally speaks German, but only when it's most inappropriate.
You might also like
assassins creedArticlesFeaturesAlice Irvin