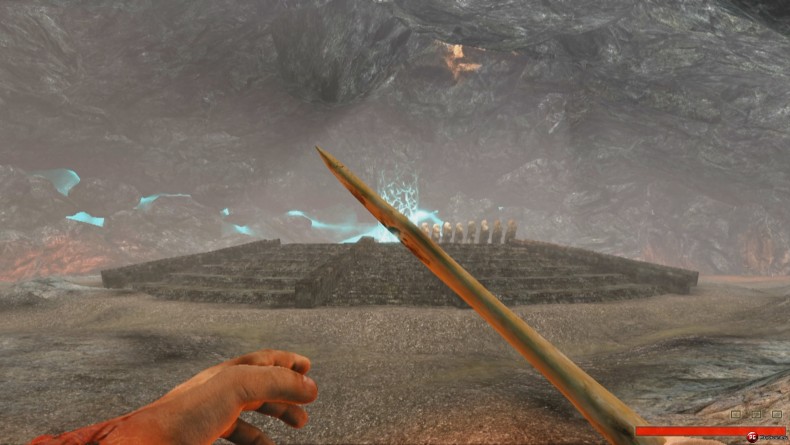 It is pretty cheap, It has some positive moments and if you overlook the overwhelming stink of it, it could have some modding potential for better graphics, UI, animations..maybe.

It's not a great game. It's not even a good game. Day One: Garry's Incident tries, and fails at creating and maintaining a good gaming experience. The important aspects weren't paid attention to and the graphics, UI, animations, and sound were not optimized to their fullest potential. Better luck next go.

This Game is Just… Wrong

Day One: Garryâ€™s Incident is a first-person shooter survival game, set in an Amazonian style jungle. The player must navigate situations, craft and kill their way through some natives for no apparent reason other than boredom on both sides. The game as a whole has some serious issues- it’s buggy and generally under-done.

The main character, Garry, is a functioning alcoholic and veteran bush pilot who thrives in dangerous situations and has a crippling adrenaline addiction along with some very obvious issues with life in general. The story all kicks off at an airstrip, where Garry is drinking himself into a stupor before his flight (in which heâ€™s the damned pilot). Then we see him flying over a suspicious looking â€œmountainâ€ while getting some rumbling from the â€œmountainâ€ until the â€œmountainâ€ explodes with crappy, blocky looking rock and 5th rate animation skills fuming out of the caldera, throwing Garryâ€™s Plane around like a hacky sack. He finds himself on a sacrificial altar about to be shivâ€™d by a â€œStereotypical native shamanâ€ lookalike contest 1995 winner. In my opinion the story is somewhat hollow, not entirely compelling or interesting and pretty much lacking in life. The concept has been done to death this year alone, Survival games have been over produced and this indicates a dip in the market-creativity. Why would you want to be a part of that? The gameplay is a wooden experience with the mechanics being not particularly apparent straight away, and the audio/visual experience not being to par. It plays like something Iâ€™d have played 10 years ago and thought â€œshit this is awesome, this is next level stuff and it wonâ€™t ever get better!â€- but this is 2013 and making the fatal error of producing something that plays like a game, thatâ€™s a decade old in an engine as easy as Unreal 3 â€“ unforgivable error. It probably sounds like Iâ€™m slamming this game out of â€œlolsâ€, but honestly itâ€™s a train wreck compared to what could have been achieved. A point I could shove in its favour is that it does feature a crafting system, while yeah, itâ€™s lumped in with the genre and therefore â€œdone to deathâ€ it still has its merits

The audio is just audio, itâ€™s not particularly fancy or intricate like a AAA title, and to be honest itâ€™s not a thriller on the old ear holes. But, bu,t buuuuuuuut, it didnâ€™t need to be. So fair play, GG, etc.

Visuals are where it goes downhill. The following will probably seem just like a list of errors, but as they are mostly errors, I canâ€™t exactly ignore them.

The animations are irritatingly simple and un-invitingly boring. They make stealth kills a lot less satisfying and generally hinder immersion in every way they possible can do. Â The graphics in general are just stock unreal engine 3, which are generally pretty good. The model for Garry in the cut scenes is horrific and primitive looking, he just has a big fat head. Icky.

I noticed if you max out your settings, the ground disappears? I have no idea why that happened and Iâ€™m not really happy about a glitch that big being in any kind of released product. Another thing is the stock foliage/ models I found present in the game that are actually in the engine, this basically means is they cut corners at some points and didnâ€™t bother to make their own models â€“ annoying yes, but it sets the tone for the rest of the game look/feel wise so itâ€™s a big deal for those In the know but then someone without Unreal engine knowledge wouldnâ€™t even notice, so that makes it less of a deal at all.

You do get this cool wrist device that annihilates just about anyone in your path providing you have ammo for it, so thatâ€™s something.

Apart from the horrendous list I covered, there have been some missing textures from items in general and some crashes that I myself have experienced. Whether this was covered in the extensive patching post release I couldnâ€™t say for sure. Donâ€™t do it, donâ€™t buy it. Donâ€™t even think about buying it. Itâ€™s not worth the money and will leave you frustrated at your $20 loss. The game play is poor and the audio and visuals fail to bring anything decent to the table, as a finished product itâ€™s unacceptable – this game is alpha at best.

Former Staff Writer Fraser enjoys long walks on the beach, and doesn't like rude people. He also plays a ludicrous amount of games on both PC and PS3 and is Studying Computer Games Development at college in Scotland, U.K., and of course games journalisming with these fine fellows you see above and below. His wallet fell seriously ill in 2009 of a Steam Sale and has never recovered since, leading to many, many games. He has high hopes that he can suitably inform and entertain many of you fine people, and play a part to make SpawnFirst-a great website, even better. As ever, feel free to add his steam account.
You might also like
PC