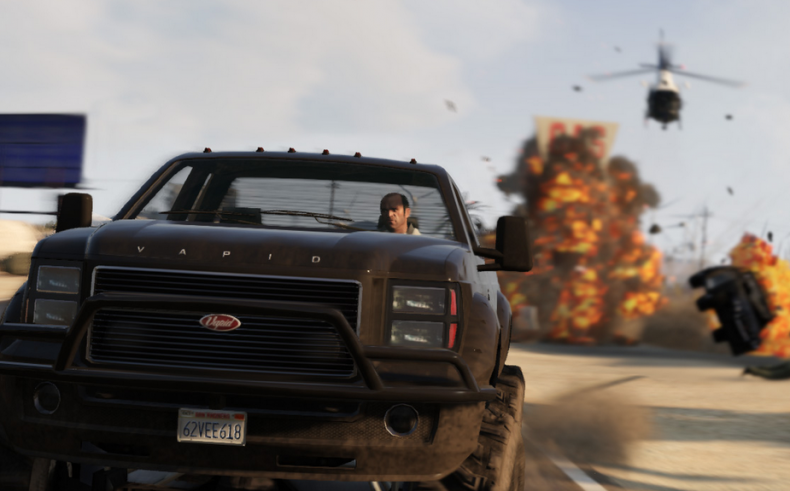 Everything. Absolutely everything. From the story to the gameplay to the sheer vastness of the world and the variations on what you can do to it, Grand Theft Auto V is a masterpiece.

Nothing even worth putting here.

It's already made over a billion dollars, so if you haven't picked up your copy yet, you're out of your mind. Rockstar deserves one of those long, slow claps for this game.

Grand Theft Auto V is, in a word, awesome. It’s hard to find a game that so seamlessly combines gameplay and story in a way that isn’t just rewarding– it’s impossiblyÂ fun. The characters are funny, the missions and side missions contain so much variety that you’ll think 10 different game studios came together and offered up their ideas for gameplay and Rockstar said, “Sure, let’s do … all of that.” Yeah, it’s violent, yes, it’s about not very nice people doing not very nice things. But we all knew that when we picked up GTA V. I think we also all knew this would be a Game of the Year candidate– and Rockstar hasn’t let us down.

It all begins with a bank heist gone terribly wrong, which ends in the alleged death of one of the robbers, Michael. You’re then transported to Los Santos, where Michael is undergoing therapy for having an idiot son. As he goes down to the beautiful beach from his therapy sessions, the game seamlessly shifts to Franklin and his friend Lamar, who ask Michael for directions to the place where they’re about to “lawfully” repossess some cars. The story shifts into higher gear when Franklin is asked by his Armenian car dealer boss to repo a car bought by Michael’s dopey teenage son, which ends in Michael forcing Franklin to drive a car through the shop’s window. When Michael makes a big mistake and pisses off a local crime lord, he needs money– and fast– to pay off that debt. When the heist to pay off that debt is successful, and the details of his crime, if not the identity of the criminal, air on the news, an old friends realizes Michael isn’t as dead as he’s been pretending to be.

There are three playable characters, Michael, the infamous ex-bank robber under F … iB witness protection, Franklin, a repo man working for an Armenian fraud, and Trevor, Michael’s old colleague who’s now running a meth business and thought Michael was dead. The three player characters also have special abilities, but it took this reviewer a while to figure out what those abilities even were: Michael can slow down time in a gunfight, Franklin can slow down time while driving, and Trevor can adrenaline-up and deal extra damage and take less. Each character also has 8 stats that can be improved throughout the game by various activities, strength by fist-fighting, stamina by running, etc. The 8 stats are special, stamina, strength, shooting, flying, driving, lung capacity, and stealth. I barely paid attention to these during my playthrough, so it’s hard to gauge how important they might be. GTA V, like its predecessors, is a game about driving– not about the mechanics of it, like a racing game, though that’s a large component– but about the very act of driving being essential to moving the story forward. Â You can, as always, steal practically any car, upgrade them, crash them. Stars in the corner represent your level of being wanted by the cops– if you jack a car or, for whatever reason, get kicked out of a strip club and then beat up some bouncers (why anyone would do that is beyond me ….), they will follow you until you disappear from their literal radars. As a departure from earlier editions, there’s a new weapon wheel to store all of your weapons, which stay with you even through death. Â The combat is what it is, but the aiming system is fully customizable, which means that if you’d rather focus on your driving, the game will give you a serious aim assist.
GTA V is also awesomely varied. For anyone who’s ever, well, played a game before, this is remarkably refreshing. Â When one portion of a mission requires you to run in and shoot a whole bunch of people, you might expect the next portion to be a variant of the same routine: run (or drive), kill, run, kill, run, kill, talk. But GTA V defies those expectations. One such mission involves a bike ride down a boardwalk, a quick swim to a yacht, and then jet skis through tunnels, all within moments of each other. Another involves putting on some hipster gear and infiltrating a self-referential tech studio (which will be so uncanny to anyone who’s ever been in a game studio or a Google-type office). Â It’s this varied gameplay that makes GTA V awesomely fun and totally replayable.

Where other games in GTA’s general peer group often devolve to combat or racing to propel the plot forward, GTA V says, Screw it, let’s pull a house off a bluff with our car now.

And I would be remiss if I didn’t mention the heists. If you aren’t sold wandering around Los Santos, play until your first heist. You pick your crew, your tactic of approach (usually stealth vs. combat), and then you gather your team, your materials, and you go for it. There’s a breathy feeling of excitement when it goes off more or less without a hitch, though there’s always a hitch. A hundred little sidequests can also fill up your time, some character-specific and some more broadly available. “Strangers and Freaks” are represented by question marks on the map, and these can change from day-to-day, which again goes to GTA V‘s replayability. Â You might be tempted to go back to your house and get to sleep, just to see what new things are available the next day. You can go shopping, play golf, spend some time in a private booth at a strip club, help a friend tow a car, rummage through celebrity trash, and, of course, steal cars. In the true spirit of GTA V‘s open world, you could go a very long time without doing anything even resembling a main mission.

For a different opinion, check out SlasherJPC’s impressions and review of Grand Theft Auto 5, where he gives the game a 9.5 out of 10!

Los Santos is pretty unabashedly modeled after Los Angeles, and it evokes LA’s equal parts glamor and awfulness (no offense, LA). It reads a little futuristic, a little grimy, and it’s a place where anything bad can happen at any time. It’s the worst of all cities, and it knows it. The characters look great, the music is awesome, as always, and there’s nothing quite like driving around in the rain or seeing the sunset the water in Los Santos. Everything is lovingly, realistically rendered– you could spend a while just sitting in your plane over Sandy Shores, watching the horizon. The only issue, and it’s not really much of one, is that the three player-characters feel uneven. This becomes a problem when choosing which character to play as– and when the game forces you to play as one or the other. It was discouraging to be taken away from playing Michael at a high point in that story to play the diametrically opposed Trevor and his methamphetamine lab. When trying, in vain, to switch back to Franklin and Michael, I was reminded that they were laying low after a big heist, which left me with the manic and unlikeable Trevor and his meth wars saga. It was never not fun to play Trevor, but it was occasionally less compelling. Another minor problem is that often the prompts telling you how to use a special ability or which buttons do which magical thing come up while you’re doing something else, largely driving. Another slightly frustrating thing is that, if you quit the game and come back, you’ll occasionally find yourself on some bizarre place on a map– I drove over several deer in Sandy Shores, just trying to get back to where my mission prompts were. These issues are negligible and are probably unnoticeable to most people. Generally? Very little can detract from the awesomeness of this game.

The Rockstar Games Social Club is available too, which collects player data– to include a playable stock market in-game. Called BAWSAQ, it’s governed by global player behavior, so if everyone starts crashing a particular brand of car, you can expect that car’s stock to go down. You can use the Snapmatic and take pictures of yourself, your upgraded car, your cool tattoos, or whatever. Grand Theft Auto Online, a separate game enabling multiplayer, will also launch via your retail copy on 1 October. There’s no reason to still be reading this. Â Run, don’t walk to go get this game now. Â Say goodbye to your friends, invest in enough water and toilet paper to last you a while. Â You won’t want to leave your house, unless it’s to go jack a car in Los Santos. Former Staff Writer Alice is a novelist, Shakespearean actress, and gamer who once survived emergency surgery in Bangladesh, but still finds most video games more exciting. She still has recurring nightmares about Uninvited (from 1986) thanks to an early childhood playing games on an ancient Mac. She's played Mass Effect more times than most people should own up to and is eagerly awaiting her very own episode of Intervention, which will likely be the Best. Episode. Ever. She also occasionally speaks German, but only when it's most inappropriate.
You might also like
GOTYGrand Theft AutoGTAV