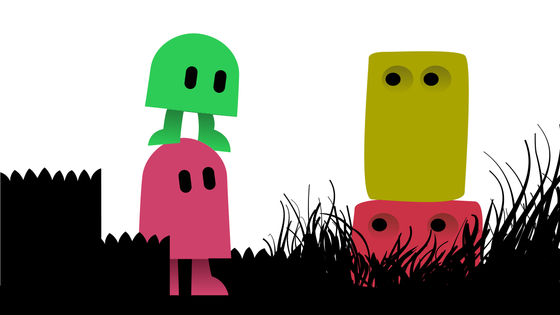 ibb and obb has its flaws. Even though it's designed as a gravity-based puzzle solver, the climax ends on a much more skill-based note, rather than one that requires your brain. But it also does exactly what it sets out to do--create an engaging cooperative experience that's perfect for a pair of friends.

Co-op puzzle games have a special place in gaming: They rarely exist, are rarely done well, and yet are beloved when it’s pulled off without a hitch. Â ibb & obb manages to do a lot of things right, but misses the mark on aÂ trueÂ puzzle solving experience. Â However, it still makes for an entertaining cooperative experience in its own right.

ibb & obb is a cooperative game through and through. Â With a friend – whether locally or online via PlayStation Network – you head through each of the varying levels, using teamwork to conquer every obstacle you cross. Â There’s no rhyme or reason to ibb & obb’s actions, and any story would’ve felt forced and tacked on. Â The entire game is focused on cooperating with your teammate. Â While the multiplayer portion is great in execution, it leaves the singleplayer to be completely broken; The left and right sticks on the same controllerÂ controls ibb & obb individually, making for a mindbendingly difficult attempt at going through any single level.

If you don’t have a friend to play with, or don’t care to play with a stranger over the internet, ibb & obb isn’t your type of game. Â It revolves multiplayer, with the gameplay based around the concept of gravity; The floor is the ceiling of the opposite plane, and if you enter a white doorway that flips your gravity, you’ll be delighted by the disorienting but unique feel of flopping upside down.

ibb & obb, the titular characters, have a few other tricks up their sleeve as well. Â Jumping on the head of the other character will give you a slight boost to reach higher areas. Â Special doorways only allow certain characters to pass through. Â Rubber platforms transfer kinetic energy, giving you the ability to pull of super jumps. Â These aren’t incredibly complex to understand, and are all used in creative ways throughout every level.

Communication plays a major role in the game, and you won’t get far without it. Â ibb & obb’s lives are tied to each other, so if one character dies at any point,Â bothÂ will be sent back to the checkpoint. Â Timing and puzzle solving are also on full display, to the point where a slight miscalculation can lead to your death, or where you might spend ten minutes trying to figure out a solution. Â These are the kind of mechanics that destroy friendships, but they also make for a hell of a co-op game.

ibb & obb goes for a minimalist feel throughout. Â The characters, levels, backgrounds, puzzles – they all have a simplistic art style, and it adds to the nonchalant and relaxing feel of the game. Â Even with small emphasis placed on the look, though, the game is still gorgeous in its own right. Â The same could be said for the sound. Â It’s not ever-present and it won’t win any awards, but when it does decide to show, it’s more than welcome.

Though solid in concept, the gameplay does take a head-scratching turn after a while, and not for the way you might think. Â Though the entirety of the game is based on solving puzzles, the latter levels have an enormous focus on precision and perfectly timed jumps. Â This leads to an large amount of frustration when cooperatively playing with a friend, because the slightest screw up (which will inevitably happen, even if by accident) will usually end in death for both of you. Â The focus shifts away from finding a solution and veers off into pure platforming–which isn’t where ibb and obb is at its strongest.

Every level contains coins for you and a friend to collect, adding in a bit of replayability if you want to master every level.

ibb and obb has its flaws. Â Even though it’s designed as a gravity-based puzzle solver, the climax ends on a much more skill-based note, rather than one that requires your brain. Â But it also does exactly what it sets out to do–create an engaging cooperative experience that’s perfect for a pair of friends.

Former Contributor Nolan Alber is a college student from North Dakota. He enjoys rescuing puppies from burning buildings and beating up criminals on the streets, and often lies about his interests to make himself look better. Nolan is an avid gamer on PlayStation 3 and PC. He impulse-buys more video games than he can actually play, and is a fan of shooters and fighting games (even though heâ€™s terrible at the latter).
You might also like
PSN

PSN Going Down For Five Hours