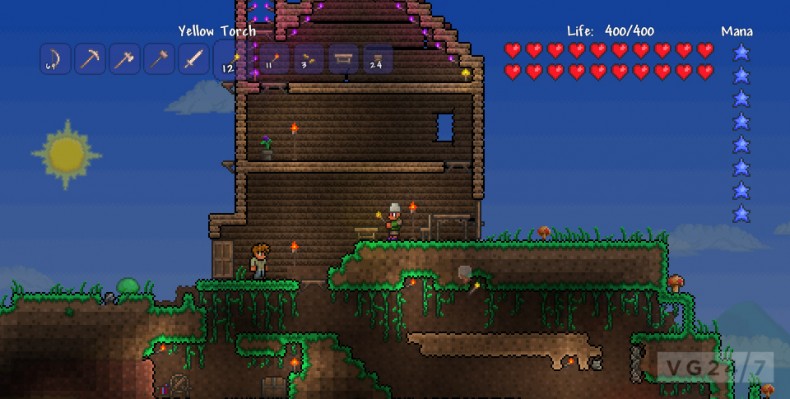 Terraria is a game that I see myself playing for years on end, even if the updates cease. Itâ€™s a game about crafting that does so much more than that. Creating a fortress, wearing my own assembled outfit to do battle with the countless enemies, and much more. Terraria feels, looks and sounds great. While the console port did lose some comfort in terms of controls and interface, it adds so much more in fresh features.

I remember the first time I cut down a tree and made a house out of it, ran away from zombies and other hellish creatures when night took over. Ah minecr- I mean, Terraria, our relationship has been a long and fruitful one, starting on the PC almost two years ago. A 2D side-scrolling Minecraft with Castlevania-like combat, gear and bosses? Sounded good to me. And not only did it sound good, it played, felt, and looked good too. When I found out it was being ported to consoles I was ecstatic. The port was successful and no matter what some PC elite tells you, itâ€™s worth it to buy it again.

Terraria begins by throwing you into a world with a shortsword, axe and a pick-axe. A guide is also thrown in to help you out too. Not a book guide, but an NPC guide. You can talk to this NPC to receive help with crafting, and heâ€™ll even spew out random hints every time you talk to him. Terraria runs on a time system, sort of like Minecraft, where during the day youâ€™ll spend most of your time building a fortress out of whatever material tickles your fancy, and during the night youâ€™ll defend it against flying demonic eyeballs, zombies, and sometimes goblins. 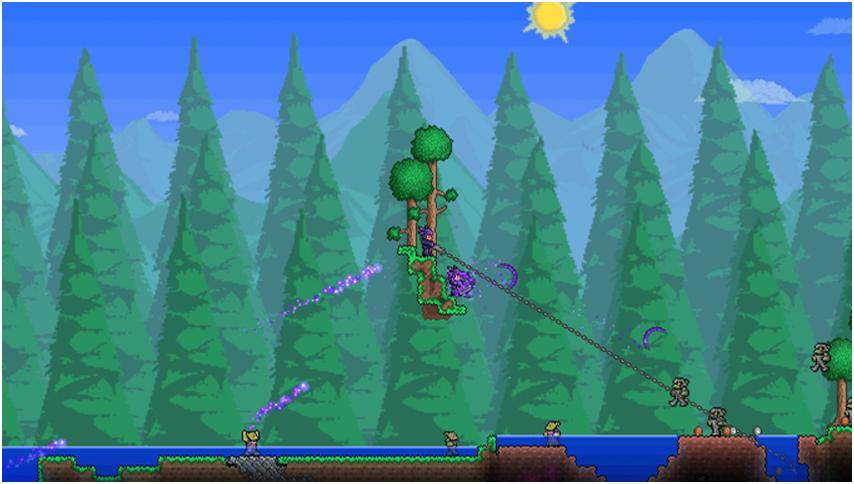 Taking on a goblin army in full shadow gear. Bring it on, peons!

Terraria obviously took a few nods from Mojangâ€™s 2011 smash hit Minecraft, but this is no shameful rip-off. The combat, while simple, brings me back to the days of Castlevania (just without the whip). When using melee weapons, itâ€™s a simple swinging motion, but when adding at least 5-10 enemies in front of you and ranged weapons into the mix, it adds up to be a blast to fight through waves of enemies. Especially during events like the Blood Moon, where enemy spawn rates double and some are able to even open your doors and attack you from inside. Or the other random event (that can be triggered, if you wish); the Goblin Army Invasion! My personal favorite, this is a lot like the Blood Moon, except itâ€™s with Goblins instead of demonic creatures. These random events keep the game exciting and challenging at earlier stages in character growth, and in my opinion they make the game. 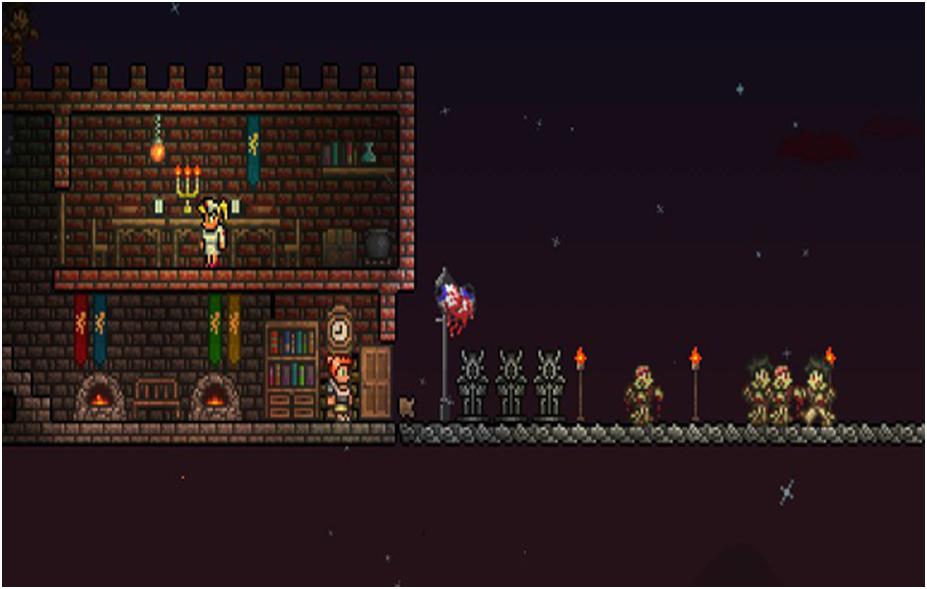 The Blood Moon has risen!

Perhaps the other combat related aspect that really stands out are the boss battles. They can range from the Giant Slime to the terrifying Wall of Flesh. Each boss battle has its own strategy and ways to go about fighting it. The difficulty can scale from an easy solo boss to bosses that practically require you to have a few friends to back you up. The great thing about this is the fact that it gives you something to work towards and achieve. After beating all of the bosses, a harder mode is unlocked in which new, more diificult versions of previous bosses are released, along with some new ones. A new biome called the â€œHallowâ€ spawns is also unlocked, which not only brings new enemies to the table, but new armor, weapons and tools to craft.

That brings me to my next and final point, the most important aspect of Terraria; Crafting of course! The crafting here plays out the way most typical MMOâ€™s do. If you have the materials, you simply switch over to the crafting menu and select what items youâ€™d like to create. Aside from the actual go-abouts of crafting, the items I created in the game are what really keep me playing, ranging from armor, weapons, toilets, beds, pianos, a Link costume, and so on. Terrariaâ€™s armor and weapons feel like something ripped right out of an RPG with its stat boosts and later on in the game, specific stats that tailor more towards a magic-based or melee-based character. Outfitting your character to your pleasure has to be one of the best feelings in Terraria.

Â Â Â  Perhaps one of my favorite things about Terraria is how the game looks. It captures a pixel style all to its own. While sure it can be compared to SNES era games, it has a specific charm to it, with its items, NPCs, and structures. The pixel-y look is accompanied by a pretty nice soundtrack. Nothing special, but it is worth mentioning that with each biome in the game, whether it be corruption, desert, jungle, Â or even the day and night cycles, allÂ  have their own themes to back it up. In my opinion, each of these background songs fit accordingly to the atmosphere. 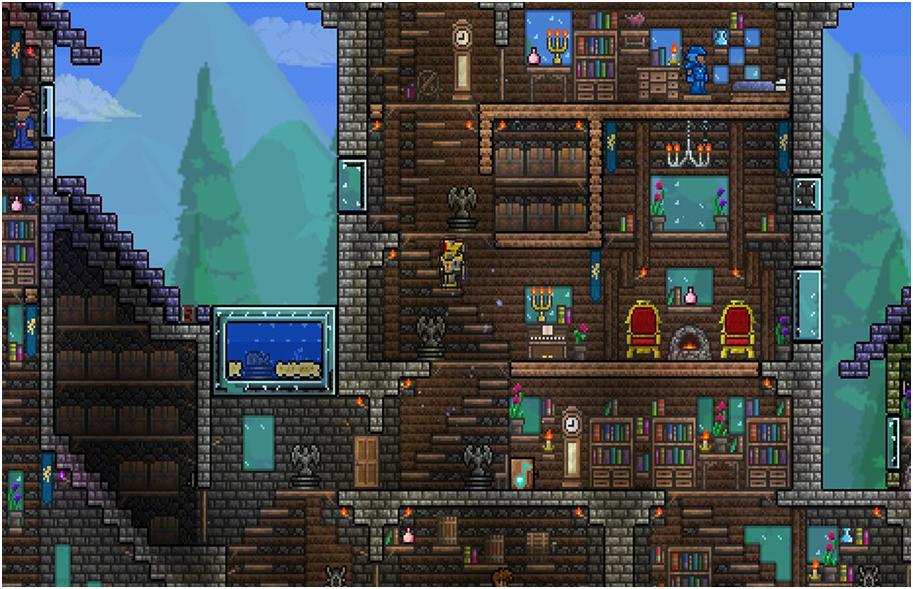 I told you the graphics are pretty!

The music in the game is all mostly simple electronic tunes, but they seem sometimes to not entirely fit some of the more hectic combat sequences, until youâ€™re fighting a boss (which also have their own themes). I definitely appreciated the time that went into structuring the soundtrack according to individual locations, and it serves up some good background â€œnoiseâ€ for an adventure.

I canâ€™t complain about much besides the menu interface and controls. Itâ€™s obvious that this game was originally made for a computer, with the number key like hotbar at the top. A few things were lost when the game was ported over to the console, like the grappling and heal hotkeys. Two hotkeys that saved a slot in your hot bar and if it was included in the console version, you’re limited to 4 hotkeys allocated to your d-pad. Going back to the menu though, at first itâ€™s hard to get used since youâ€™re primarily navigating with the analog stick and RB and LB buttons (R1 and L1 if on ps3).The controls overall feel a bit awkward, but with time spent in the game the wrinkles seem to smooth themselves out.

Probably one of the most disappointing times in my gaming career had to be about two years ago after Terrariaâ€™s original PC team Re-Logic deciding they were done updating after only one big update. I was pretty devastated, but when I learned that it was being ported to consoles and published by a new company, 505 Games, there was some hope that theyâ€™d add a couple of new features specific to consoles. And they did, believe meâ€¦they did. Some of the new items added are sets of armor, weapons, a new final boss, and pets that accompany you on journeys as well as help out during fights. 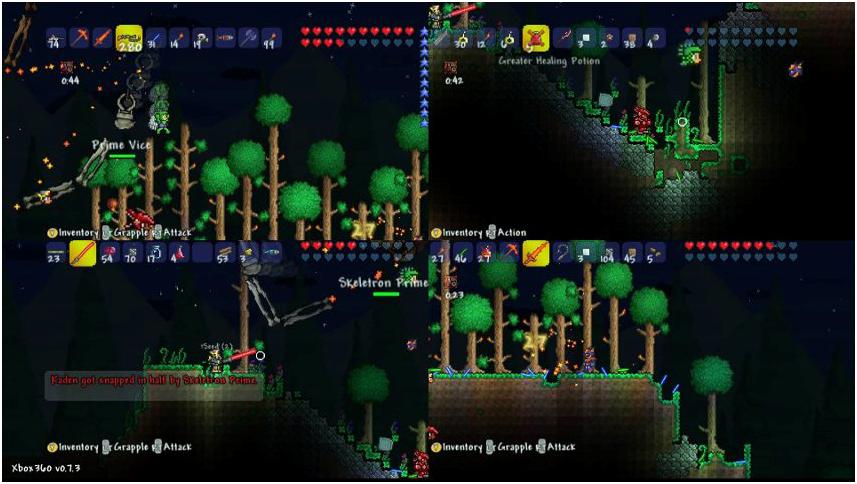 4-player co-op can be hectic and chaotic, but most of all, incredibly fun.

Besides in-game items, a new local multiplayer function is available for HDTV owners, allowing 4 players to play on one screen. Also included is a tutorial for Terraria newcomers, and an improved character creation system.

Terraria is a game that I see myself playing for years on end, even if the updates cease. Itâ€™s a game about crafting that does so much more than that. Creating a fortress, wearing my own assembled outfit to do battle with the countless enemies, and much more. Terraria feels, looks and sounds great. While the console port did lose some comfort in terms of controls and interface, it adds so much more in fresh features.

Former Staff Writer Alex has been gaming since his mind could comprehend what gaming is, starting with the brutal likes of the Iron Fist Tournament to grinding levels in RPGâ€™s. In his free time he loves to play bass and go on adventures with his dog, Chief. Alex aspires to be a gaming journalist and bring as much as he can to the SpawnFirst table.
You might also like
minecraftTerrariaxbox