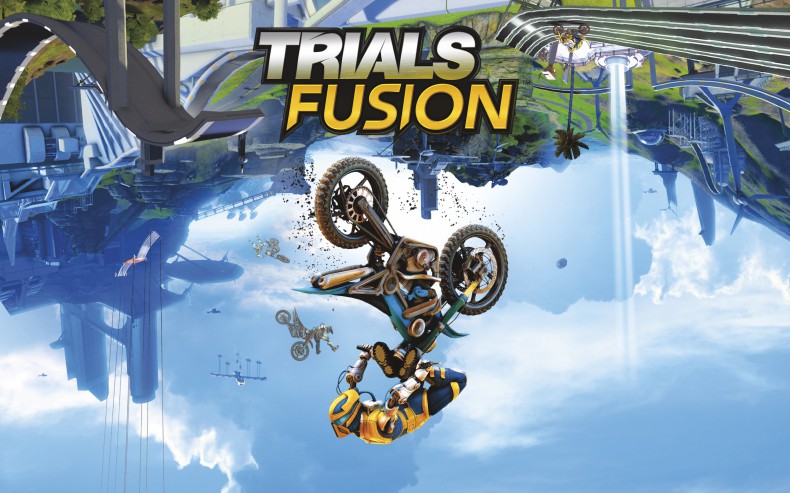 Overall, Trials Fusion is a worthy entry into the franchise. While the career may turn off newcomers, those who keep with it will find the challenging events satisfying. The physics-based gameplay is tight and precise, even if the tricks can be unruly and while you can forget the local multiplayer, Track Central will keep gamers coming back for months to come.

Fusion takes place in a futuristic world merging nature and technology where one minute you will tackle obstacles in a science facility and the next through lush rain forest. Two announcers accompany you along the way in what initially seems like a hint system but slowly evolves into to a light story, but if you are prone to frustration, it might be in your best interest to turn off announcers immediately. When you are continually hitting restart to the closest checkpoint, the repetitive commentary can become grating.

Running at a blistering 60fps and 1080p on Playstation 4, it’s easy to get the feeling of adrenaline as the camera pans catching your first big air. While the game may not be push current gen hardware, the colorful and varied environments across the 8 career locations are a sight to behold. Metals shine, water shimmers, and sand and snow storms push against your rider in beautiful HD glory; there is even a 2D side-scrolling level that feels pulled from Donkey Kong Country Returns. There are some minor pop-in texture issues when hitting quick restart, but it’s a small price to pay to jump right back into the action.

Advancing through the career will net you medals and cash, which can be used to unlock locations and accessories. While the cash is used for aesthetics amongst your bikes and riders, medals are the life blood of the career mode and where newcomers may face the toughest hurdle. To advance, the majority of levels will need to be either silver or gold medaled to hit a total threshold, but the junk food mentality of “just one more” works, even when my frustration hit the highest levels.

Don’t assume frustration is a bad thing, though. Frustration is a large part of the franchise, but the difficulty found in the first half of the game is uneven, and ramps up in the second act which can be difficult even for veterans. Don’t be surprised to spend hours on some extreme challenges trying to complete only a few obstacles, where each checkpoint feels like a huge accomplishment. Tutorials are scattered amongst the levels to help ease into the precision based gameplay, but even after completion of the tutorial you may not have the confidence, or understanding, to attempt the mechanic again.

Also new to the series is the revamped FMX trick system, where all trick are mapped to the right stick. Pulling off a trick is easy, but completing the one you want is something different. As frustration grows working with the new system, many players will forgo tricks unless it is necessary. And in most of the levels, it is unnecessary; the majority of Fusion’s tracks are about completing in the fastest time with the least amount of faults, with only a few trials, called Skill Games, which change up the formula. Trick based courses give a time limit in which you must hit a certain point total, while others may challenge you to drive as far as possible without leaning. Within career mode, though, these are few and far between. If you like a Skill Game, you most likely won’t see it again.

If after dominating the leaderboards you are looking for more, the career mode does hold some secrets. Each course offers three challenges that can be completed ranging from the absurdity of defeating a penguin in tennis to the extremely difficult warp zones. Even finding some of the challenges is an achievement in and of itself and adds a new dimension to a game typically known as going left to right.

Outside of the career mode, there are more reasons for gamers come back. If you are the creative type, a course creator is built into the game, but be warned; there is no in-game tutorial system in place. You can play around in the environment, but understanding how to make a course is obtuse unless players visit RedLynx’s youtube channel, which is referenced only the first time using the tool unless sought out inside the Editor Menu.

Socially, you can jump into Track Central which features tracks made by the community, favorites of the developer, and more. Tracks are rated by difficulty and community approval and if you find a creator with the same tastes as you, add their creation feed straight to your home screen. Right now, the community is just getting a grasp on the tools but the potential is there to become something amazing, especially if creators expand upon some of the underdeveloped trials found within career.

There is also a local multiplayer option where up to four friends can duke it out motocross style through multiple heats. Points are not calculated based on who always finishes first, but also by how many faults each competitor has during a race. There are a handful of tracks, but none with the type of action seen in career mode. After trying a few races with friends, you’ll push the novelty aside and go back to passing the controller around for high scores.

Overall, Trials Fusion is a worthy entry into the franchise. While the career may turn off newcomers, those who keep with it will find the challenging events satisfying. The physics-based gameplay is tight and precise, even if the tricks can be unruly and while you can forget the local multiplayer, Track Central will keep gamers coming back for months to come.

Editor-in-Chief - A graduate from the University of South Carolina, Corey likes to ignore his paying jobs for video games. Playing since the NES, games have played a big role in his life and family. He hopes one day writing and art can be a career rather than a hobby.
You might also like
CoreyCorey Kelleydigital download

Battling the Backlog – The Political Machine 2012