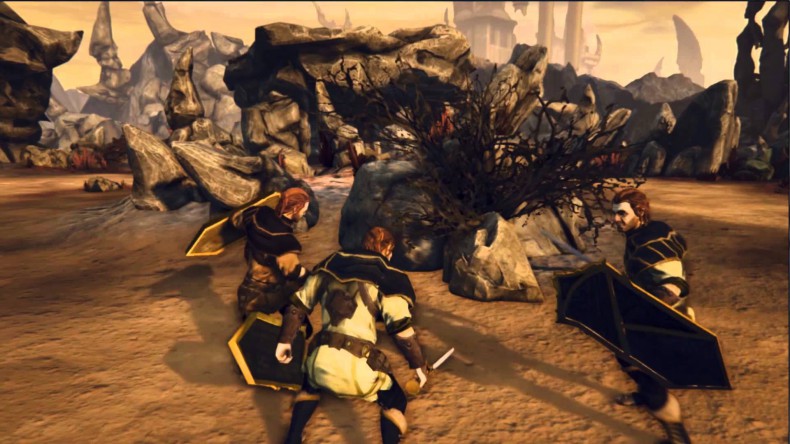 Skara: The Blade Remains is a Multiplayer Online Versus (MOV) game designed in Unreal Engine 4. And it looks beautiful.

With five different races on release, Skara  factions allow you and your friends from similar races to band up and dominate the world. As your faction begins to move ahead or behind, the map will reflect it. Skara’s writer, Jackson Adams, will keep notes on what’s happening in the world and be sure to write it into the history of Skara.

There are five planned races; Khärn, Shinse, Durno, Tamvaasa, and Celea. Each race has a unique set of weapons and fighting style, which, along with armor, can all be customized.

As well as the five races, Skara  developers are working on five arenas and a Colosseum. Each arena features a unique setting that will effect how combat unfolds, while the Colosseum will allow for one versus one (1v1) fights and tournaments.

All of the extra money in Skara‘s Kickstarter will go towards creating new races and arenas (Up to seven races and 11 arenas), in game features such as crafting and trading, scenario editors, and a story mode for each race of Skara. Although these features will be added to the game regardless, hitting the stretch goals will allow for more employees and faster development.

Skara  is a completely skill-based game. With a free-to-play mentality, the developers have reassured that, “No matter how deep pocketed you are, you can’t pay to win in Skara.“

The only in-game purchases (or microtransactions) will be cosmetics. Armor, character skins, or different fatalities will allow for the players to customize their characters even further while providing the fullest experience to all… for free.

Skara  will feature quick game modes, as well as matches that last hours on end. Free-for-all, Team Deatchmatch, Siege, Kill the King, Dominion, and Capture the Flag are all modes featured in Skara.

Skara  will only get better with the more people that participate in the Alpha and Beta.

You can find the Kickstarter here.

1 person likes this
Articles, Features
indiekick it to the goalKickstarterskaraSkara the blade remains

Alana lives in the Great White North, where Polar Bears rule and Maple Syrup is next in line for the throne. During those frigid Canadian winters she is granted more then enough time to explore the lands of Azeroth, play through the next great indie title, or practice hitting fellow gamers with green shells. When she isn't doing any of the above, you can find her practicing the accordion, attempting to juggle, or taking care of the exotic animals and plants she keeps(that are not really meant for the Canadian climate).
You might also like
indieArticlesFeaturesAlana Fearnall