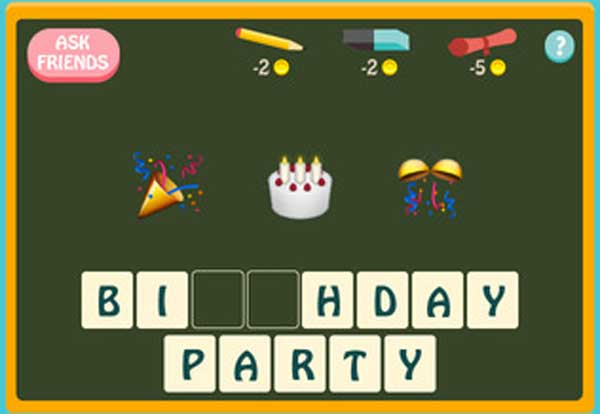 With each passing day, the App Store becomes increasingly encumbered with emoji quiz games. With what began as a fun twist on the ever-popular picture trivia games – where the player is given one or a few images, and must correctly fill in an answer with the letters allocated to the letter bank – emoji quizzes games along with emoji culture have become worldwide smartphone phenomena. While there have been smash hits in the genre, with games such as Guess the Emoji, Emoji Pop, and Emoji Mania, the quest to find alternatives that are just as good as these originals has become more difficult in the increasingly saturated emoji quiz market. Spin-offs are ubiquitous, and when most games in the genre have the same or very similar names as their neighbors, discerning which emoji quiz game one is even downloading is a feat in itself.

However, as with most game genres, there are the renditions that are created every so often that revitalize the genre in a way that sets them apart from the norm. Today we would like to present two of those games, Emoji Story (listed on the App Store as Emoji Puzzle) and Emoji Quiz. Emoji Story is the Candy Crush Saga of emoji quiz games. We’re serious. The content is exceptional, with hundreds of levels to offer, a unique school-themed take on hints, and answers that alternate, between guessing the correct phrase that the emojis represent and using the correct emojis that fit a given phrase. That is not to mention the beautiful stylistic choices made by developer TopRankApps Limited, which implements a visual feast of cartoon characters, stages, and an animated King-like map that the player hops across with each completed level. The levels are difficult, too – there were numerous times where we were forced to use hints in order to advance to the next test. Luckily, as with many emoji quiz games, the answers for Emoji Puzzle have begun to pop up around the Internet. In short, Emoji Story seems like a complete, unified game; one where it is evident that the developers didn’t cut any corners. While Emoji Puzzle has a combination of great content and great visuals, Emoji Quiz makes this list purely for its dedication to the task at hand: emoji quizzes. Too often with trending games, such as picture trivia games, do different versions get pumped out by hundreds of different developers that all create the same game that usually feels half-finished. With Emoji Quiz, the developers slashed the decision to pump up their version with any wild visuals, and focused instead on creating an endless arsenal of levels that get harder, and harder, and even harder. Other games, such as Guess the Emoji, have been known to release an initial version with a specific number of levels and later release an edition with a unifying theme, such as Guess the Emoji – Movies. Emoji Quiz did this differently, and scrapped the idea of multiple editions of the same game in order to release the most complete emoji quiz game to date.
With over 500 levels, players will certainly be looking for the answers and cheats for Emoji Quiz; however, they can be assured that due to the sheer content available, Emoji Quiz might be the last emoji quiz game they need to get their fix.

Please Allow Me To Introduce Myself