Wii Mini comes to the US 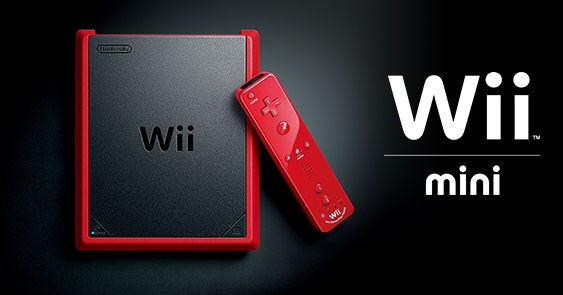 Nintendo has confirmed the rumored US release of the Wii Mini, the budget version of the original Wii console.

At $99.99, the system is housed in matte red and black plastic, eschews a slot loading disc drive for a top loader, and comes paired with a red Wii Remote Plus and Nunchuk controller. The box also includes a copy of the fan-favorite Mario Kart Wii.

The cost reduction took some features with it; thereâ€™s no access to the internet, so downloadable games are out of the picture, as well as 480i only video output and a lack of an SD card slot to expand memory. As expected, Gamecube compatibility does not return with this version of the console.

Originally released exclusively in Canada, the system was met with a lukewarm reception with many (understandably) questioning the purpose of it. Itâ€™s most attractive application, as a virtual console box, is hampered by the fact that it doesnâ€™t support VC games.

The system releases on November 17th, right on the cusp of the next generation. much like the 2DS, this one’s for the kids and the budget gamer.

Contributor Geron's been into games for as long as he can remember. From fighting Octoroks to studying graphic and game design at GMU, the guy's been around the block when it comes to interactive entertainment. When he's away from a console, he's working on his next piece of art. Fun Fact: his first published artwork was in issue #144 of Nintendo Power Magazine, when he was only 10.
You might also like
MariowiiWii U