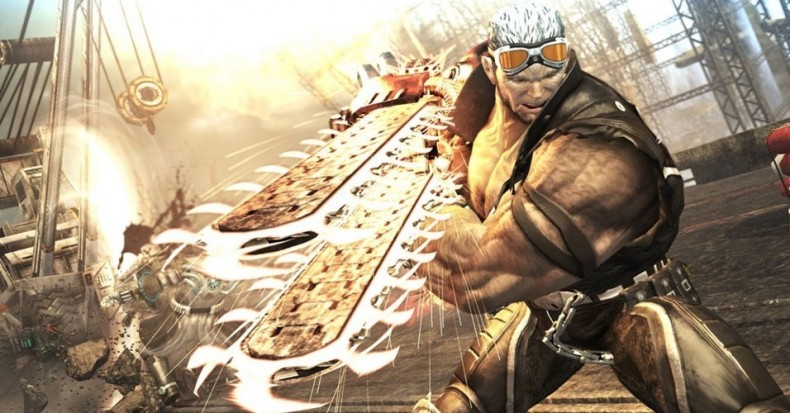 Dumb fun, strange visuals and presentation give game a sense of personality, B-movie writing is endearing

This game is the lowest point in Platinum's track record thus far with overly simple gameplay and design, expectedly bad writing, and unimpressive multiplayer. While some parts of the game are dumb fun, I can't really recommend buying this game at full price. I feel as if the developers treated this like a bargain bin game and as such may be worth a look if found in a bin for $5, or there is nothing better to rent at a video store. Hopefully the developer will put more effort into their next project.

As the beat ’em up genre slowly fades into obscurity and fighting games try to stay relevant after the passing of the arcade generation, it is nice to see a developer take a stab a creating a game that combines both into the same game. Anarchy Reigns is Platinum Game’s attempt to create a hybrid of two genres. While the idea is technically solid, the results of the developer’s work does little to impress.

The game begins by giving the player the option to choose between two characters: Jack, the protagonist of Platinum’s “Mad World,” and newcomer Leo, a highly trained government agent. Both men are searching for Maximilian, a disgraced soldier who is on the run after being accused of murder. Leo’s objective is to help Max who was his mentor and friend, but Jack is out for revenge because Max caused the death of his young daughter.

The death of children is quite dark, especially for the tongue-in-cheek writing consistent with Platinum’s game catalogue, but is very rarely brought up in the game so there is no impact to the audience. Jack also seems to forget about his late daughter and never once acts like a grieving father. He comes off more as a psychopath looking for a fight than a man determined to avenge his family. Even though Leo is a bland and generic anime character, at least he is consistent with his motives.

The rest of the story is just like every modern fighting game story in which it tries to find the slightest reason to place two or more of the characters into an area so they can fight; nothing new and nothing special. Every time a fight is about to ensue, the characters exchange poorly written dialogue as their close-ups fill the screen. On the bright side, this is one of the better stories created by the Platinum writers merely because it is bearable, unlike “Bayonetta’s” and “Vanquish’s.” This gives me a glimmer of hope that the developers are getting better and starting to learn from their mistakes. Based on the developer’s track record, they have consistently made games with fun gameplay and terrible stories, but this time it seems both sides are in the grey for this game. Every character generally plays the same through the use of light attacks, heavy attacks, throws, and can use their equipped weapons by holding the right trigger. There are no complex combos, or difficult to master special attacks, this is a straight forward button-masher.

There are some extra features such as usable objects and special weapons found in the level, but nothing from outside the box. There are also various environmental hazards found on every stage that do nothing more than hinder the player’s progress since they don’t do much damage and are not very beneficial to a player’s strategy in the multiplayer.

In the single player campaign, the chosen character is placed on one of the maps where the player must gain a specific number of points to unlock two types of missions: story missions and optional missions. In order to advance to the next level, the player must complete the story missions, but the quickest way to unlock these missions is to play the optional missions. Defeating enemies barely raises the player’s score and enemies will run after a set number is defeated which pads out the time until the next mission unlocks.

Optional missions provide the most points for unlocking the next story event and for the most part, add some variety to the game. Most missions revolve around defeating a set number of enemies, surviving until time runs out, or defending an objective, but others will have players racing across the map in a hovercraft, playing a soccer-like mini-game, or piloting a helicopter to defeat monsters and rack up a high score.

Story missions are straightforward and serve as boss fights outside of the less significant brawls and miscellaneous objectives. Most fights also include any number of the game’s roster, but there are two fights in the game against very large creatures in an attempt to spice things up. Sadly, every one of these fights requires very little strategy and can be completed easily by locking onto an opponent and executing the same combo every time the boss is in range.

For all of the repetition and boringly simple gameplay mechanics, it is still not that bad. If you play the game in short bursts and turn your brain off, beating up waves of enemies can be somewhat satisfying. It may also be hard not to crack a smile after listening to the stupid, but somehow catchy, gangsta rap music playing in the background or have a laugh at the terrible b-movie writing mixed with the ridiculously designed characters.

Of all the unintentionally hilarious design choices, the multiplayer is not one of them. The standard modes are all here: Deathmatch, Team Deathmatch, Capture the Flag, One-on-one, and Battle Royale. There are few additional modes such as Survival and Deathball, which is Rugby with anime characters. Regardless of which mode you choose, it comes down to one thing, beating down opposing players.

The problems with the single player mechanics are present in multiplayer except by twofold. The camera seems to be the one feature affected the most from all of the chaos because the mix of explosions and colors cause sporadic camera movements making it very difficult to keep a bead on an opponent. Since every character essentially plays the same, everything bout comes down to button-mashing.

In both modes, there is a gameplay feature called rampage mode which gives the character temporary invincibility and increased damage. Also if two characters who have activated rampage mode attack each other, a quick time event takes place and the player who does the best instantly defeats the other opponent. In single player it is fine, but in multiplayer this feature easily destroys any balance found in the game.

The only way to defend against someone who activated rampage, is to also have activated rampage. The only other option is to run and hope that player catches somebody else because it is impossible to defend against their attacks or counter. This is a broken mechanic that should have either been modified for multiplayer or omitted from it altogether. The strange and eccentric characters look good, though, they shine the brightest against the muddy backdrops that are the game’s levels. It is obvious the title’s roster received the most attention from the designers because the levels contain significantly less detail than the characters. While the overall game doesn’t look bad, it’s graphics are quite inconsistent.

Sound design is nothing special as the game contains the stock sound effects used in all low-budget action games. The voice acting, much like the writing, is bad, but mixed with the goofy music, this is more of an endearing quality than a critical flaw.

Anarchy Reigns tries to be a traditional fighting game by allowing the players to enter a practice area to get a feel for the characters. This feels like a waste considering every character essentially plays the same and because players can be more successful online by spamming the same move.

The game also contains a simulation mode where the player chooses a multiplayer mode and goes toe-to-toe against the computer. This serves as better practice for prominent online competitors and allow players without a stable internet connection to get the multiplayer experience as well. This game is the lowest point in Platinum’s track record thus far with overly simple gameplay and design, expectedly bad writing, and unimpressive multiplayer. While some parts of the game are dumb fun, I can’t really recommend buying this game at full price. I feel as if the developers treated this like a bargain bin game and as such may be worth a look if found in a bin for $5, or there is nothing better to rent at a video store. Hopefully the developer will put more effort into their next project.

Former Contributor Chris West is a graduate of Texas Tech University where he earned his BS in Electronic Media in Communications. Chris has been passionate about games since he was a kid and today prefers games with a strong narrative. He also has a soft spot for horror games, legitimately scary games mind you, and any game claiming to be challenging, Dark Souls for example. When he isn't playing games, he is pursuing his other passions: music and photography. Chris can play both guitar and bass and then take high quality pictures of the performance with his camera. In the end, Chris enjoys writing about his passions and ideas, when he isn't destroying his friends in Call of Duty.
You might also like
ActionFightingPlatinum Games