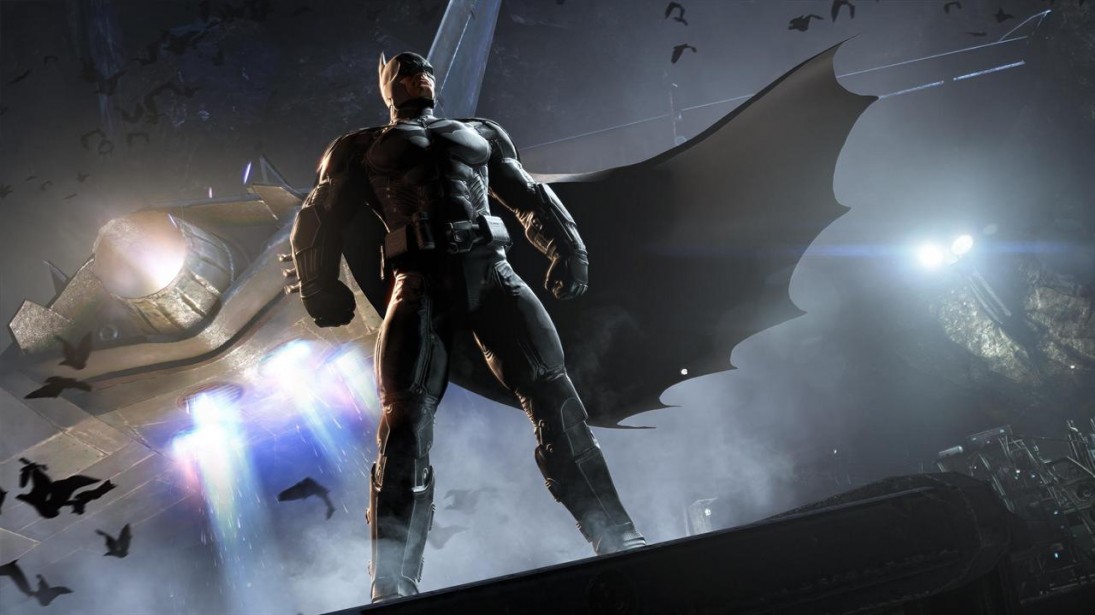 Predictable plot; Offers nothing new to the series and retreads a lot of old and familiar ground; Multiplayer

If you haven't played Arkham Asylum or Arkham City, and Batman: Arkham Origins is your first foray into the series, then you're probably going to enjoy it. You may even be highly impressed. Whatever you do though, just don't play it after you've played Asylum and City -- it'll be like playing games in HD, only to be reverted back to standard definition. If you're really craving to play as Batman once again and keep Arkham safe, then renting would be your best option. Just make sure to lower your expectations beforehand.

Two Steps Forward, One Step Back

If there’s one thing we’re not short of regarding anything Batman related, it’s 1) Batman’s origin, and 2) stories involving The Joker. Both The Joker and Batman’s origins are so iconic in their own rights that someone – anyone – writing a Batman story would probably have a hard time avoiding either. Rocksteady’s Arkham games didn’t outright ignore Batman’s/Bruce Wayne’s origin, but neither did they try to blatantly retell the story we’re all too familiar with. Rather, they cleverly showed us in increments via flashbacks in the Scarecrow segments in Arkham Asylum. Even more of a bold move was (kind of a spoiler but not really) killing off The Joker in Arkham City. I, for one, was excited for a new villain to step up and take the centerpiece in the next Arkham game. After all, there’s hardly a shortage of villains in Batman’s lore. But then Batman: Arkham Origins was announcedâ€¦ a prequel. And it was everything I didn’t want. Now, after having played the game, I’m not so much bitterly disappointed, just rather nonchalantly unsurprised that Batman: Arkham Origins is a huge letdown in the Arkham series. 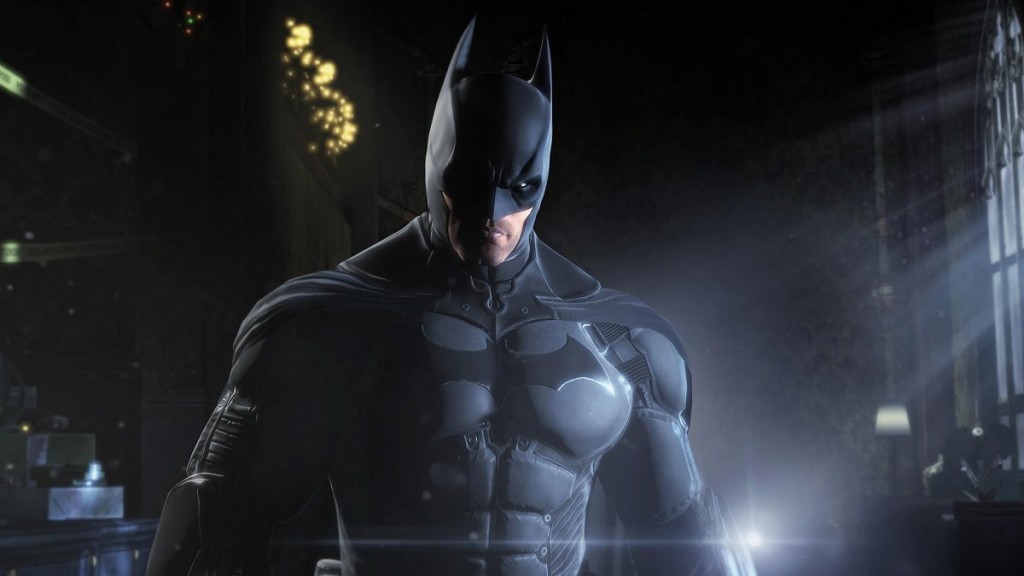 Much like how Scott Pilgrim has 8 of Ramona Flowers’ 8 evil ex’es out to get him, Batman has 8 evil assassins out to get him thanks to Black Mask putting a 50 million dollar bounty on his head. A unique 8 choice of villains as well I might add. It’s a great setup, and the story starts off strong. Early on in the game however, the story takes a dramatic turn for the worse due to a way, way too clichÃ© and obvious plot twist that happens, that any bat-fan should be able to see coming from a mile away. After this all too obvious twist is where I lost complete interest in where the story was going. Why would they even tease us that someone passes away in the game, when we already know that same character is well and alive in both Arkham Asylum and Arkham City? It was never the brightest idea to make a prequel after things had really started to heat up in the Arkham series, and the restraint on the storytelling just proves the point.

And aside from a couple of new gadgets, the gameplay has stayed largely the same. Identical, in fact. Now I know if it’s not broken you shouldn’t fix it, and Arkham Asylum‘s two-button, attack and counter combat system may have been somewhat revolutionary in 2009, but four years down the line and two sequels later and it most definitely isn’t. It feels so repetitive getting into fist-fights with goons, and the game constantly throws more and more enemies at you as you progress. Throwing more enemies in doesn’t offer too much more of a challenge; it just becomes more time consuming — and at times, frustratingly so. The developers at WB MontrÃ©al played it safe, but it’s too safe; Arkham Origins, for the most part, reeks of fear from the developers. Fear as if the developers from Rocksteady are constantly looking over WB MontrÃ©al’s shoulders with a checklist of things they aren’t allowed to do or explore. However, one gameplay saving grace are the boss battles, which shakes the gameplay up, and they all, more or less, hit the mark. A challenging and fast-paced brawl with Deathstroke stands out above the rest. 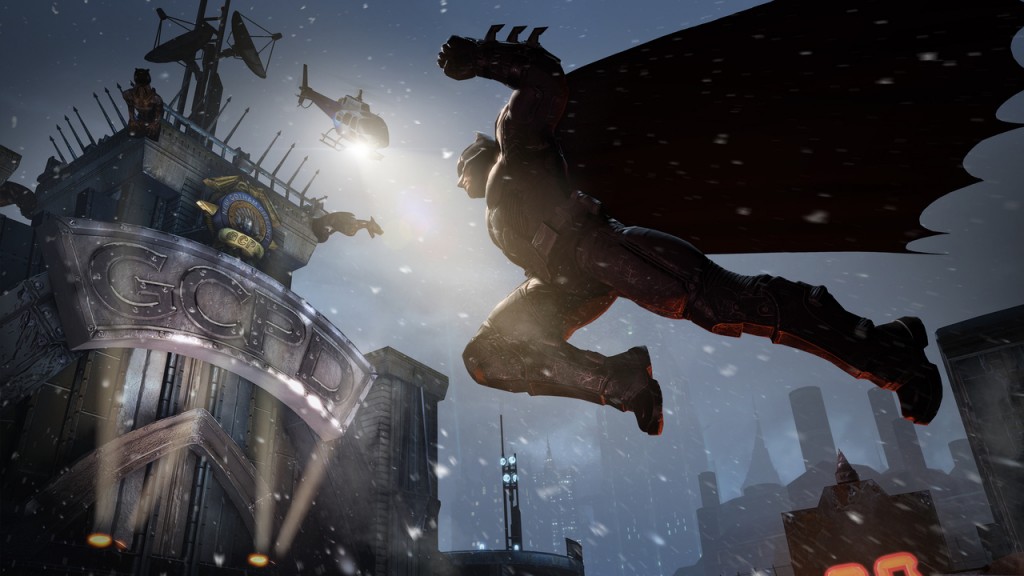 If I didn’t know that Troy Baker was voicing The Joker instead of Mark Hamil and that Roger Craig Smith was replacing Kevin Conroy for the voice of Batman this time around, then I would’ve been none-the-wiser. A testament to both Troy’s and Roger’s skills, and their voice acting is so good that it’s in another league compared to most of the rest of the cast. Prison guards and hostages are embarrassingly bad for the most part, with their wooden facial expressions matching their lifeless line deliveries. Arkham is dark, gritty, muddy, and won’t be blowing anyone away in the graphics department. Definitely not bad, but just a port over from the two year old Arkham City. Cutscenes, on the other hand, are masterfully crafted. It’s just a shame the storyline isn’t as interesting as the well put together CGI.

Firstly, I don’t thinkÂ that anyone has played through an Arkham game and craved for a multiplayer mode, but regardless, we got it — and it is legitimately terrible. Secondly, the multiplayer component isn’t developed by Warner Bros. MontrÃ©al (who did the single player component); it’s developed by Splash Damage. I don’t know who thought it would be a good idea to be able to play as one of the brainless goons that you beat the snot out of in single-player, but whoever it was should probably be in Arkham Asylum. Yes, seriously, you can actually play as a gun-wielding goon, in what is a terrible third person shooter 3v3 match with two additional players getting to play as either Batman or Robin and swoop in for kills. In all seriousness, Arkham Origins‘ multiplayer has to be up there in the all time greats of “Worst Multiplayer Modes Ever Created”.

I found it extremely hard to even find a multiplayer match of any kind. Maybe this could possibly be to people’s complete lack of interest in the multiplayer mode?Â Â It took 40 minutes for me to actually find a match on one occasion. The multiplayer won’t actually start without eight players in a lobby, so there were people losing patience and jumping in and out all the time, therefore the amount of time to actually get a match going. When I did finally find a match, it was never, ever worth the wait. I’ve never been a fan of developers outsourcing their multiplayer modes, and Arkham Origins is a prime example of why. 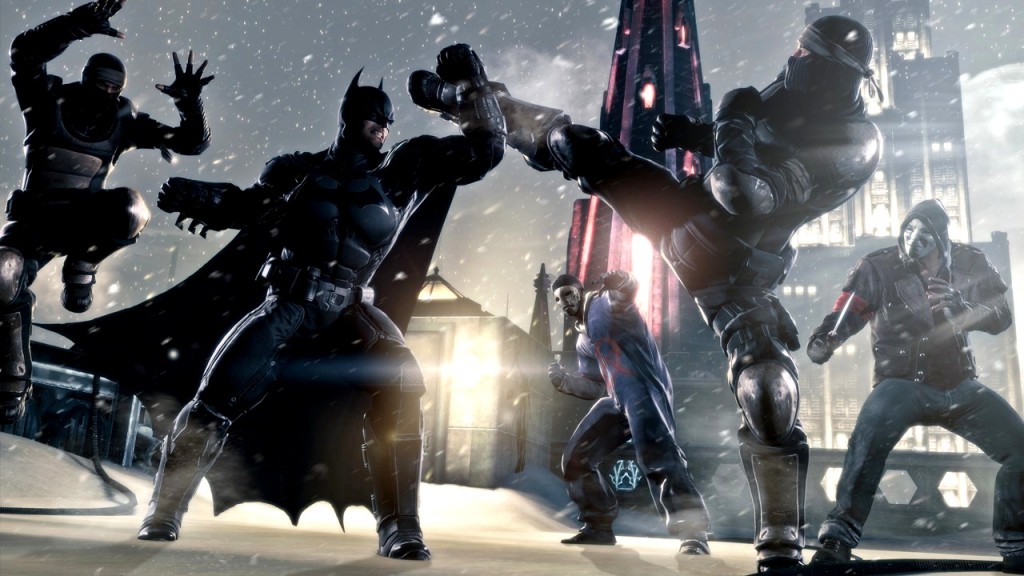 What’s most frustrating in Batman: Arkham Origins is how much old ground it retreads. Do you remember going to Penguin’s Ice Lounge in Arkham City where you got to beat up goons and punch a shark in the face? You’re going to be doing exactly that in Origins, except you won’t be punching any sharks in the face. Remember The Mad Hatter side mission? Yeah, he’s back with another all-too-familiar side mission for you to do. RememberÂ swooping around Gotham for the first time in Arkham City? Well the map’s largely the same in Origins, except it feels very bare and devoid of anything but buildings and goons, and there’s a lot less to do. There’s a large bridge in the center that is annoying to get across this time, too, but thankfully you can fast travel, which is a nice, handy addition.

I suffered severe framerate issues in Arkham Origins, which became so bad that on three specific occasions my game froze and I had to switch my PlayStation 3 off and restart from my last checkpoint (there’s nothing wrong with my PS3, for the record). A quick Google search later and I found that I wasn’t the only one suffering from this problem. Having to actually restart my console three times during a 8-12 hour playthrough of a game is hardly convenient.

There’s plenty of Riddler Puzzles to solve and there’s a few bog-standard side missions to do here and there. Once I was through with the main story, though, I didn’t find much incentive in investing a lot of time in them. Challenge maps make a return also, but having already pounded more than enough enemies in the story, there’s no real need for them to be there other than to fill up the options menu. 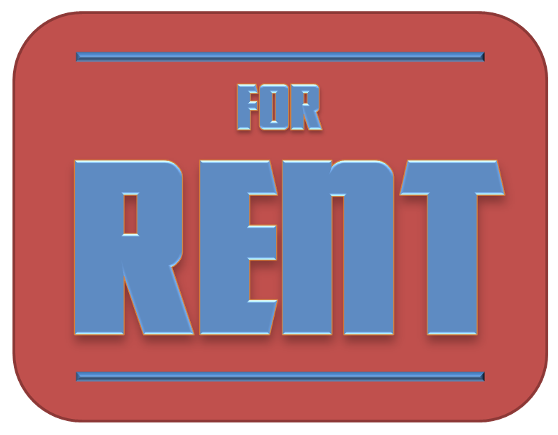 If you haven’t played Arkham Asylum or Arkham City, and Batman: Arkham Origins is your first foray into the series, then you’re probably going to enjoy it. You may even be highly impressed. Whatever you do though, just don’t play it after you’ve played Asylum and City — it’ll be like playing games in HD, only to be reverted back to standard definition. If you’re really craving to play as Batman once again and keep Arkham safe, then renting would be your best option. Just make sure to lower your expectations beforehand.