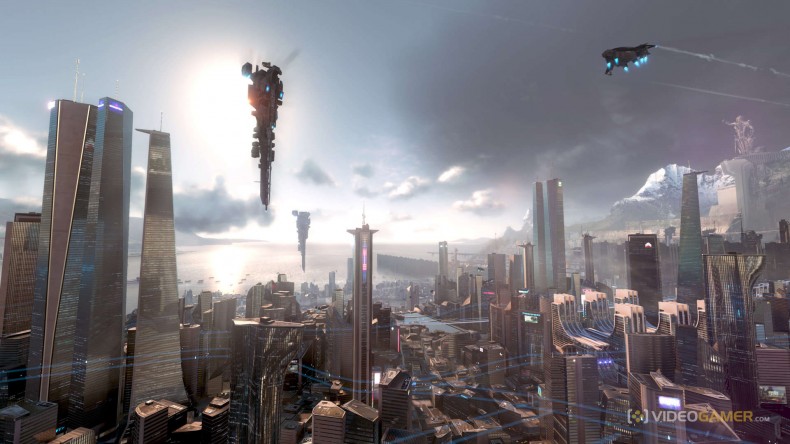 The best graphics in a console game yet

Killzone: Shadow Fall is a run-of-the-mill shooter with amazing graphics. It's definitely worth a shot if you want to see where console visuals are headed.

One of the Prettiest Games to Date

Killzone: Shadow FallÂ is the latest installation in Guerilla Game’s FPS series that pits the Helghast against the Vektan. Being on the PS4, it had the chance to breathe some new life into the series. But despite the amazing-for-consoles visuals, the gameplay and storyline simply fall short.

I don’t expect much from a story in an FPS, but it does need to drive the campaign. I just could not get behind any of the characters in Shadow Fall. Â I didn’t care what was really happening as I ran through the levels, blasting the enemies. Having not played an earlier part of the series, I thought I might miss out on some things. Instead, I just ran around and shot whoever was looking at me. I had to stop some terrorist group named The Black Hand, but their motives seemed muddled. Some more exposition and explanation would have been very much welcome during the boring cutscenes.

It plays basically how you would expect as an FPS, but the weapons are heavy in your arms, which surprised me considering the character you play as has been raised as a soldier his entire life. The drone that follows you around is a nice touch and break from the running and gunning, but the touchpad controls are weird. There areÂ four modes that you can cycle through depending on your need: attack, shield, zipline and a sort of EMP bomb. Using the touchpad to swipe to a mode is a little clunky. I’d like to see it either cleaned up or moved to a button combination. I think the multiplayer would be better if more people played, but it’sÂ tough for any gameÂ to gain ground onÂ Call of DutyÂ orÂ Battlefield. And with the lack of change sinceÂ Killzone 2,Â Shadow Fall brings nothing new to the table. The objectives change dynamically throughout the the match, but that’s not really the annoying thing. The invisible walls and tight enclosures makes everything feelÂ claustrophobic. Couple the badly designedÂ maps with the lack of players and you have something that I did not want to spend too much time with.

Visually, Shadow FallÂ shines. I’ve never played a better looking game on a console. There were some odd clipping effects that I hoped would be resolved in this generation of consoles, especially since this was developed for the PS4 alone. But alas, you win some, you lose some. The background music is serviceable and won’tÂ lose any points as far as I’m concerned, but the voice actingÂ is a different story. It wasn’t the worst I’ve ever heard, but I’ve heard better in many low budget games. I expect much better than bland, unemotionalÂ actingÂ from characters in a AAA title.

Shadow Fall is a run-of-the-mill shooter with amazing graphics. It’s definitely worth a shot if you want to see where consoleÂ visuals are headed. You should at least rent this to enjoy the beauty of the latest console generation. I wouldn’t wait to play it though, by the time this game is cheap, there are bound to be other games that look at least just as good as Shadow Fall.

Editor-in-Chief Zac is a Communication/Journalism major at Shippensburg University and the man in charge of SpawnFirst. He is a lover of all games and platforms, but loves to grind through a good ol' RPG.
You might also like
FPSKillzone: Shadow Fallps4