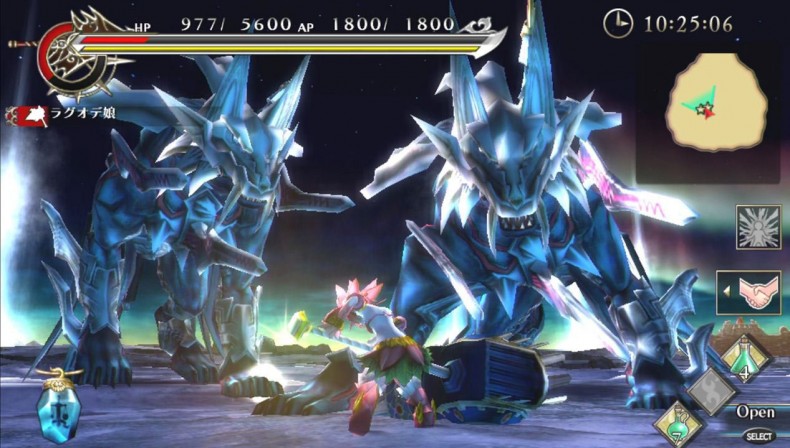 Ragnarok Odyssey ACE is a game worth checking out at Redbox if you enjoy the series or want to try out something new, but it surely isn't worth full retail price.

This was a good try at bringing the Ragnarok universe to home consoles, but with graphics that are clearly meant for the PS Vita and repetitive overall gameplay, I wouldn't recommend paying more than a couple of dollars or hours of your time on this game.

If you love to customize your characters for hours on end, Ragnarok Odyssey ACE is for you.

This transportation of the Ragnarok Online universe to the PlayStation 3 and PlayStation Vita sticks firmly to its roots as a massively-multiplayer online game with an emphasis on character options throughout the entire game, which can either be good or bad. It all depends on how you perceive the game itself.

In ACE, you can play how you want and look like whatever you want. Sounds great, right? Well, it would be great if the gameplay was as fleshed out as the character customization options. If I can change the shape of my character’s eyebrows but can’t seem to get a change of pace while I play, then what’s the point?

I get that I have to save the world or whatever as I hack and slash my way through the seemingly unconnected levels, but why? And if there really is no “why”, the developers could have at least made the gameplay more interesting.

Once I figured out the secret, I mindlessly played my way through the game, encountering either similar or the exact same areas constantly. An MMO through and through.

This is where you can tell that Ragnarok is an MMO through and through. You can usually get away with some stale gameplay and NPC interactions if there is a social aspect to things. People playing with other people generally changes a game a lot, even if they are completing the same quest multiple times. Without that, you just have a stale game.

Multiplayer also felt like it was a last ditch attempt to save the game from gathering dust at a GameStop near you. It hardly adds anything, and simply isn’t the same as a constantly living and breathing world that MMOs can bring.

ACE shines outside of gameplay. While actually jumping, dodging, and slicing my way through the repetitive areas was certainly boring, the options offered to me apart from that were well thought out.

The ability to hire on mercenaries to assist me was pretty cool. The job-based skills were pretty fun to use as well, even though they still did not provide too much variety.

The Tower of Yggdrasil, a 400-floor, randomly generated dungeon that is unlocked when you complete the game is the best part about Ragnarok Odyssey ACE. But it can feel repetitive as well towards the end. Ragnarok Odyssey ACE is a game worth checking out at Redbox if you enjoy the series or want to try out something new, but it surely isn’t worth full retail price.

This was a good try at bringing the Ragnarok universe to home consoles, but with graphics that are clearly meant for the PS Vita and repetitive overall gameplay, I wouldn’t recommend paying more than a couple of dollars or hours of your time on this game.

This review is based on the PlayStation 3 version of the game as provided by the publisher.
The Lowdown
Badges
PlatformPS Vita, PS3
GenreAction-RPG
DeveloperGame Arts
PublisherXseed Games
RatingTeen
Release Date

Editor-in-Chief Zac is a Communication/Journalism major at Shippensburg University and the man in charge of SpawnFirst. He is a lover of all games and platforms, but loves to grind through a good ol' RPG.
You might also like
PlayStation 3PlayStation VitaPS Vita