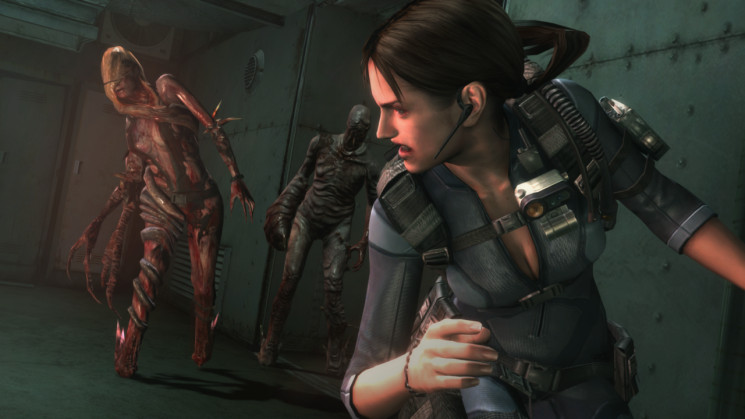 Weapon customization is fun and rewarding; Plenty of weapons and enemy types; The Queen Zenobia is an impressive setting worth exploring; Raid Mode is fantastic

Resident Evil: Revelations is refreshing. It's comforting to know a series I've been playing my entire life can still surprise me. While the formula in Revelations isn't quite enough to make it a must-play game, it's nice to see Capcom attempting to embrace what made the franchise so special in the first place.

The Return of Survival Horror?

Resident Evil 6 was disappointing. It just was. I found it completely average at best and mind-numbingly boring at worst. But Capcom, for all its sins, is still a fine video game company that puts out some good (and even great) games. Resident Evil: Revelations may not be the saving grace of the series fans were hoping for, but it is a step in the right direction.

The story in Revelations is set between the events of Resident Evil 4Â and Resident Evil 5. It involves series regulars Chris Redfield and Jill Valentine. Jill and her new partner Parker Luciani are sent to search for Chris and his new partner Jessica Sherawat aboard a deserted ship named the Queen Zenobia. From there the story relies on the same nonsensical plot twists thatÂ the series has come to be known for. The narrative is bloated and idiotic.

Look, this is Resident Evil, so fans know what they’re getting into. I for one don’t care about reading a Wiki that would probably be longer than the Bible if it were to be compiled into one book just so I can know what’s “going on” in the series. I prefer the good ‘ole days of Resident Evil back before the zombies knew how to ride motorcycles or fire guns. The overall story has devolved into a pile of garbage nowadays.

OK, Lady Gaga is just really starting to freak me out now…

Thankfully Revelations is also meant to be played, and it shines in the gameplay department. The weapon variety is great, and every shot counts (especially the missed ones). Capcom wasn’t intent with just creating a game filled with firefights, though. Revelations constantly provides players with new and often shockingly intense obstacles. It’s challenging, but conquerable. It’s streamlined, but not pandering. What matters most is it’s fun.

The enemy AI, while not exactly intelligent, is competent enough to dodge or even shield against bullets. As I said, every shot counts. Ammo is a little scarce. As such, exploration is key to surviving the duration of the game.

Revelations allows players to explore in a way that hasn’t been seen in the series in quite some time. The Queen Zenobia is filled with locked doors and secret passages. Finding the necessary means to access these areas is often a very smart thing to do thanks to Revelations’ fantastic weapon customization options. Littered throughout the game are modifications that can increase a gun’s potential or even transform it into an entirely new weapon. Experimenting with the different mods is highly enjoyable in practice.

But I do have some complaints about the time I spent with the game. The constant backtracking can lend a sense of tedium to the proceedings. One-hit kills are always annoying, and Revelations is riddled with them. The underwater sequences, while rare, are still awful. Hey, at least there aren’t any quick-time events.

Jessica is one of the worst characters I’ve ever seen in a game.

Revelations looks fine. It’s a port of a handheld game, so it does have some graphical limitations. Some textures are blurry. Viewed up close, most surfaces lack detail. Characters animations can be twitchy. The framerate is downright abysmal at times.

But exploring the Queen Zenobia is still cool. It’s basically a floating version of the original Resident Evil‘s mansion. Plenty of amazing sights and sounds await players who are willing to overlook some of the game’s more glaring technical issues. It’s cool to once again see a Resident Evil that relies on pure atmosphere to get its point across.

The sound quality for the Xbox 360 port of Revelations is surprisingly intact. The voice acting is crap, as I’m sure it was in the 3DS version as well, but the soundtrack is pretty solid. A pulse-pounding score lends to the sense of atmosphere. The music changes to fit certain parts of the game, which is nice, but sometimes it can sound as if John Williams snorted some cocaine and then directed an orchestra while jumping up and down and yelling.

Included on the disc with Revelations’ campaign is something called “raid mode”. It’s addictive and almost single-handedly worth purchasing the console version of Revelations for. In it players are tasked with playing through the same levels from the campaign, but with some big changes. Enemies randomly spawn with health bars and damage output indicators. Each enemy and level conquered grants players experience points that level up their chosen character. A terrific loot system lends to even more experimentation with weapons. It’s basically a way of introducing light RPG elements into the Resident Evil universe, and it’s ingenious. The content on display in the mode is extremely impressive.

Resident Evil: Revelations is refreshing. It’s comforting to know a series I’ve been playing my entire life can still surprise me. While the formula in Revelations isn’t quite enough to make it a must-play game, it’s nice to see Capcom attempting to embrace what made the franchise so special in the first place. This is the direction Capcom should take Resident Evil in. Screw Jake Muller.

Features Editor Buddy was a journalism major at the University of Alabama. He now spends his days writing novels that will probably never get published and wishing he were an extra in an Anthony Hopkins film. He's been gaming since he can remember and has owned every console from the NES to the TurboGrafx-16 to, yes, even the Phillips CD-i. He loves all games, but his favorite genres are shooters and RPGs. His favorite game is The Legend of Zelda: Ocarina of Time.
You might also like
CapcomgameJill Valentine