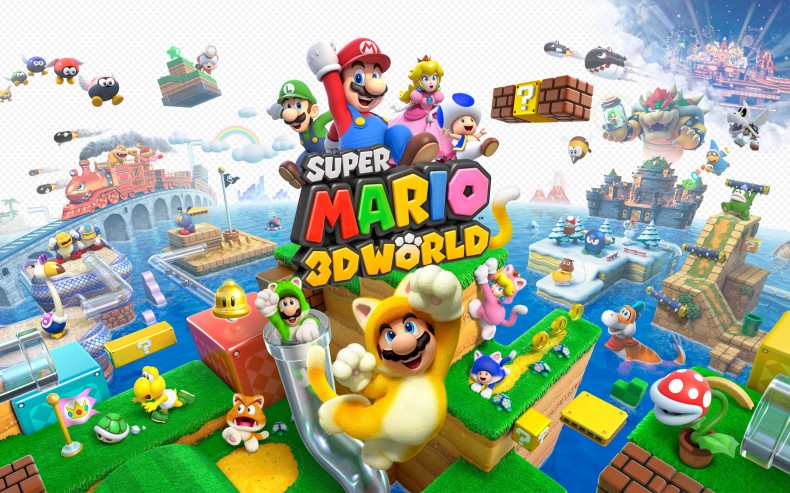 Enough 3D to Leave You Peachless

For once, Peach isn’t captured by Bowser. While perusing the Mushroom Kingdom, Peach, Mario, Luigi, and Toad come across a mysterious clear pipe that they fix up.Â  A fairy, called a Sprixie, appears, but is suddenly captured by Bowser. The four characters then pursue Bowser through seven worlds in order to rescue the captured Sprixies.

Link puts fairies in bottles all the time.

As with all Super Mario games, you’ll be using a grand total of three buttons, but a plethora of power-ups. Each level typically has at least three green stars and a stamp to collect. Although you donâ€™t need to collect the stamps and stars to complete the level, you will be compelled to complete each level to 100 percent later in the game.

As you play each level, you are able to choose between the four characters that each sport a different advantage. Mario is the well-rounded choice for jump height and speed; Luigi sports a higher, float-like jump; Peach can hover in place for a second or two; and Toad boasts unmatched speed. Having these options allows you to choose the character that works for your gameplay style or the levelâ€™s specific challenges.

Along with choosing your player, you can also choose your controller. You can play with a Wii Remote, a Wii Remote couple with a Nunchuk, Wii U Pro Controller, or the Wii U GamePad, which uses the mic and touch screen feature in select levels.

You must complete eight worlds in total in order to save the Sprixies from Bowser’s control. As you move from world to world, the levels get progressively more difficult. Super Mario 3D World does well to challenge the player to a level of frustration that is not discouraging. When you go back to play previous levels, you may even laugh at how â€˜hardâ€™ certain ones were.

As stated earlier, most levels contain at least 3 stars and a stamp to collect. The stamp can be used in any posts you make to the MiiVerse, which creates the sense of community because it allows you to see what other gamers have to say about their experiences in the worlds and levels.Â  The stamps are also great for those of us with little to no artistic ability (not pointing any fingers). The green stars bring an extra level of completion to the levels, and also permit you to visit locked levels later in the game.

In light of the recent resolution wars, youâ€™ll be happy to know that Super Mario 3D World runs at the favored 1080p and 60 frames per second. So any other details donâ€™t matter because it meets that â€˜standardâ€™ â€“ am I right?Â  To go on though, Super Mario 3D World does an incredible job at maintaining the feel and look of a classic Mario game while adding some whistles and bells to make it current and impressive. The visuals were stunning, vibrant, and inventive. To put it simply, Super Mario 3D World takes the creativity of Super Mario Galaxy and merges it with the classic gameplay and feel of Super Mario Brothers.

As you make your way through the Sprixie kingdom, youâ€™ll encounter a number of new songs along with some fan favorites. For example, Super Mario Galaxyâ€™s New Egg Galaxy makes a few auditory appearances, and as you approach the end of the Sprixie Kingdom, you will likely fall in love with Bowserâ€™s world soundtrack. The new soundtrack features amazingly catchy tunes that youâ€™ll find yourself humming while cooking eggs with your wool socks on in the morning (or is that just me?). Youâ€™ll truly be satisfied with everything that pours into your ears.

Super Mario 3D World features a four player co-op arcade mode where players can join and leave at a momentâ€™s notice.Â  The co-op mode is local, which can be annoying simply because it limits you to sharing the screen.Â  If one player travels off screen and the camera follows, the other player will be bubbled and brought to the wandering player (much like the New Super Mario Bros. series).

As added fun to co-op play, youâ€™ll see your characterâ€™s contribution to the overall score at the end of each level.Â  The highest contributor is given a crown, which gently illuminates their player. If youâ€™re competitive, you can try and bump the crown off of your teammates and steal if for yourself.

The only issue is the lack of online co-op play.Â  However, I can see why that was omitted. Many challenges would become incredibly easy if you werenâ€™t restricted to the screen. If one player could be off in the distance while the other triggers a timed bridge, you could very easily cross the bridge and then bubble-travel to your partner.

If you like surprises, stop here (weâ€™ll wait for those to leave the roomâ€¦)Â  The game begins with the traditional eight worlds, but upon â€œdefeatingâ€ Bowserâ€™s final castle level, new worlds appear and you unlock an additional character: Rosalina. And as eluded to previously, if you collect all of the green stars and stamps, you unlock yet another world. The additional character and worlds add more gameplay and activate a new challenge, which is to beat every level with every character.

Not only this, but there is also a special Luigi Bros. add-on (from the NES) that is accessible from the title screen. This is awarded to anyone that has purchased New Super Luigi U or has completed the game (first 8 worlds). All in all, you get much more than you expect with this game. Versus Mode Co-Host/Creative Co-Director Chris is ridiculous. True story: instead of paying rent one month he bought a Nintendo 3DS. Being a fan of all gaming platforms is tough on his wallet, but he's a gamer on a budget. He plays his PS Vita or 3DS while on the train to/from work and his Xbox 360 or Wii U when at home. He won his university's Video Game Olympics competition back in April of 2012 and mentions it whenever he can in conversation. His other interests include comedy, surviving Chicago, and hangin' out with his pup, Theta.
You might also like
MarioNintendoreview