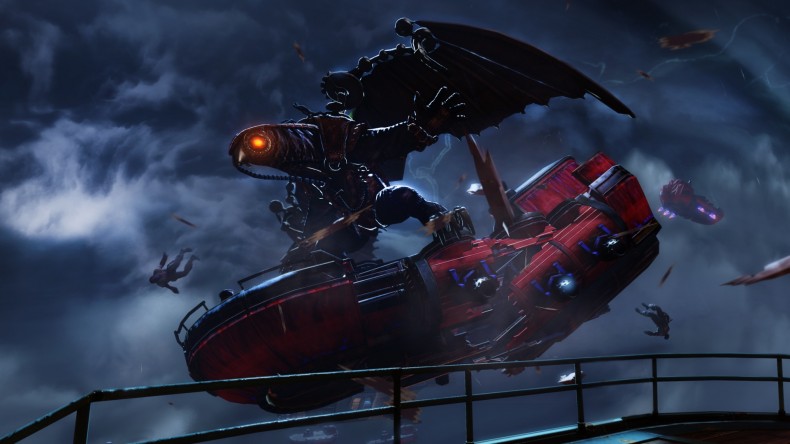 Before I begin, let me just make the point absolutely clear: I love Bioshock Infinite. The narrative, the characters, the setting and the aesthetic design of the whole game are absolutely stellar, and a big tick in favor of the argument that video games are art (as if anyone reading this article needs convincing). And despite everything Iâ€™m about to write now, I enjoyed playing through it. It was ok. I guess. But if the gameplay had been as brilliant and as deep as the story, then it would have unquestionably, hands down, become the game of the year. Every year. Forever. 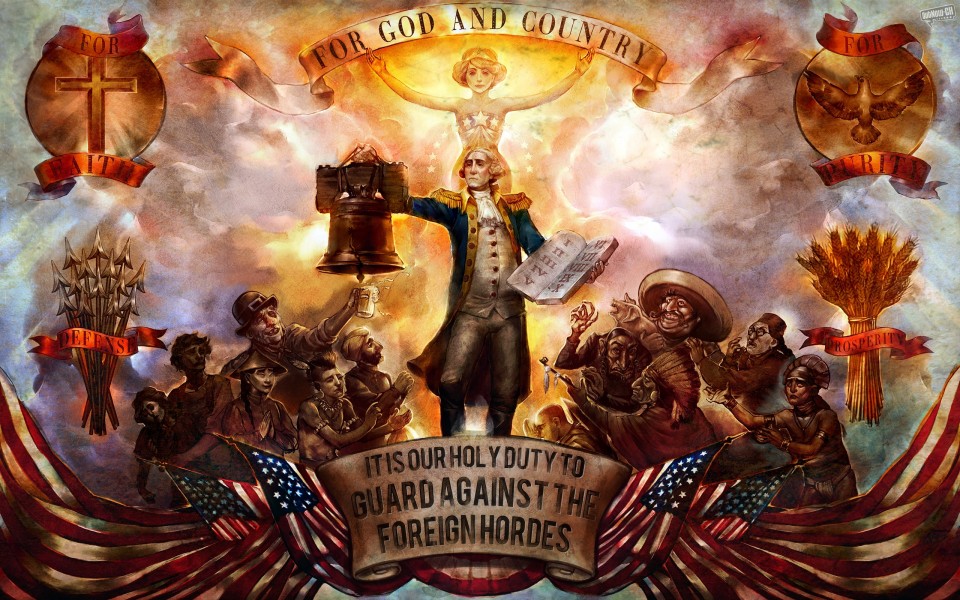 Infinite does break some ground in subtly (read as: not so subtly) framing the real world’s present underlying current of fanatical patriotism.

But as things stand, it wasnâ€™t and so it isnâ€™t. Infinite is unquestionably a great game, in terms of scope and vision, but itâ€™s not, in purely practical terms, a very good one. Especially when compared with the original title in the series. It could have been an improvement on every mechanic and idea that the original Bioshock implemented way back in 2007. But instead it removes features at every turn, in what the best PR weasel might call â€˜streamliningâ€™ but what the rest of humanity will know as plain old dumbing down.Â  Ken Levine and the folks at Irrational already caught flak for Infiniteâ€™s â€˜surly-male protagonist-guns-â€˜Murika-yeah!â€™ box art, which was blatant pandering to the Call of Duty fan base, and especially ironic considering the gameâ€™s exploration of intolerant jingoistic attitudes. When Levine announced that an alternate cover would be included on the inside of the case sleeve, it seemed to placate the pretentious hordes. Little did we realize however, that the oversimplification had infiltrated the rest of the game.

The original Bioshock featured a total 8 totally unique weapons and a total of 11 Plasmid powers. Infinite features 8 Plasmids, renamed as Vigors, and an initially more impressive 14 weapons. However, itâ€™s worth noting that there are 5 pairs of weapons that are essentially re-skinned version of themselves, with slightly different ways of operating. So really, it has 9. In both versions, the guns look great. The retro chic and ramshackle of the original and the not quite cyberpunk of Infiniteâ€™s guns suit their setting and environment perfectly. And then Infinite commits one of the most annoying and common sins present in video game design. It only lets you carry two weapons at a time. It seems like everyone since the Doom marine hasnâ€™t been able to carry more than two guns at once, presumably due to lack of upper body strength. At least in titles like Max Payne 3 there was a reason for it, since you were limited to Maxâ€™s two shoulder holsters and his free hand, and the game attempted some loose grasp at realism. However Infiniteâ€™s protagonist is already on a flying city, traveling through parallel dimensions and shooting lighting of his hand. My disbelief is already suspended; let me carry more bloody weapons! I canâ€™t see any reason for it, other than the belief by Irrationalâ€™s executive wing that players used to most modern FPS controls would struggle to understand that they could carry a pistol, a shotgun, a sniper rifle and a rocket launcher at the same time, or disregard it as unrealistic. Again, despite the flying city and electric hands thing. 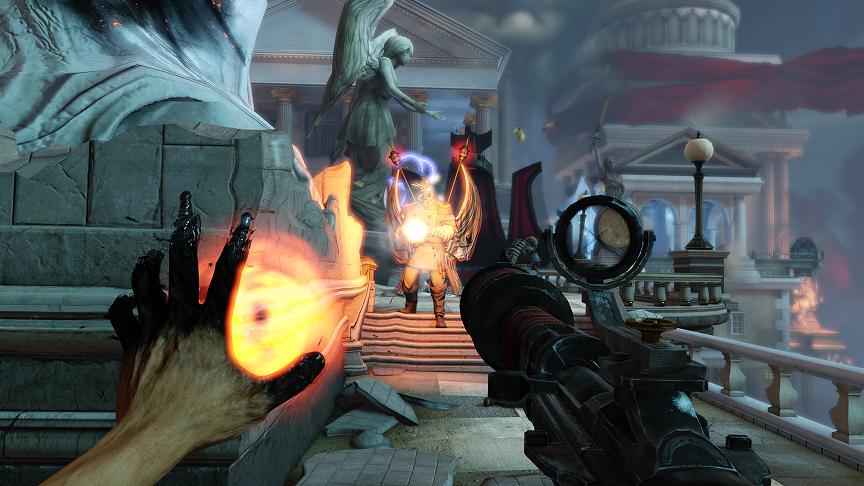 I’m throwing derivative Streetfighter-esque fireballs at a George Washington automaton carrying a Gatling gun, while standing on a floating city, but let’s not break the immersion by having me carry more than two weapons.

This limited weapon selection transitions nicely into my second major issue with the game, namely the lack of resource management. In Bioshock version 1, there were two main currencies that needed to be conserved: Dollars, and Adam. The first can be found by scavenging, looting enemies, and through similar petty theft. They can then be used to buy general items, such as health kits, Eve syringes to recharge your abilities and other assorted widgets. Adam is a lot harder to come by. It can only be obtained from Little Sisters, and they in turn, can only be accessed by killing their diving suit clad guardians, the infamous Big Daddies. But if you want to upgrade and unlock more Plasmid powers, then youâ€™re going to have to get your kill on. The Daddies are as easy to kill as youâ€™d expect a legion of heavily armored, genetically engineered, cyborg protector zombies to be. This is to say, not very. And that makes the Adam you harvest form their juvenile charges all the sweeter when you eventually overcome them. And if you want to upgrade you weapons, well then you better be prepared to search high and low for the single-use Power to the People machines (more on the exploration, and lack thereof, below). Whereas in Infinite, there is one currency; Silver Eagles. Again, this is a clear attempt by the developers to simplify a series which thrives on complexity.

My third major problem, as prefaced above, is the lack of exploration. Rapture was claustrophobic, cramped and decrepit in the way youâ€™d expect a war torn city under hundreds of meters of water. Open skies and beautiful vistas were never going to be part of the equation. Therefore the game had to compensate and did so by having sprawling levels chock full of secrets, enemies and other interesting things. However in Infinite, the sky is literally the limit. The welcome addition of sky rails opens up a third dimension of movement, but at the expense of the other two. The locations and environments of Columbia, whilst beautiful and impeccably designed, are little more than glorified corridors made to shuttle you between each admittedly fascinating plot point. While there are a few more open areas, and their inclusion is welcome, it ends up feeling far more enclosed and directed than Rapture ever did. And thanks to the almost on rails design of the game, youâ€™re often barred from returning to areas that you visited previously. Granted thatâ€™s sort of taken care of by the story, but even so, realizing that you missed an audio diary or Infusion bottle in the Hall of Heroes does you no good once you reach Finktown, since thereâ€™s no way to back track. 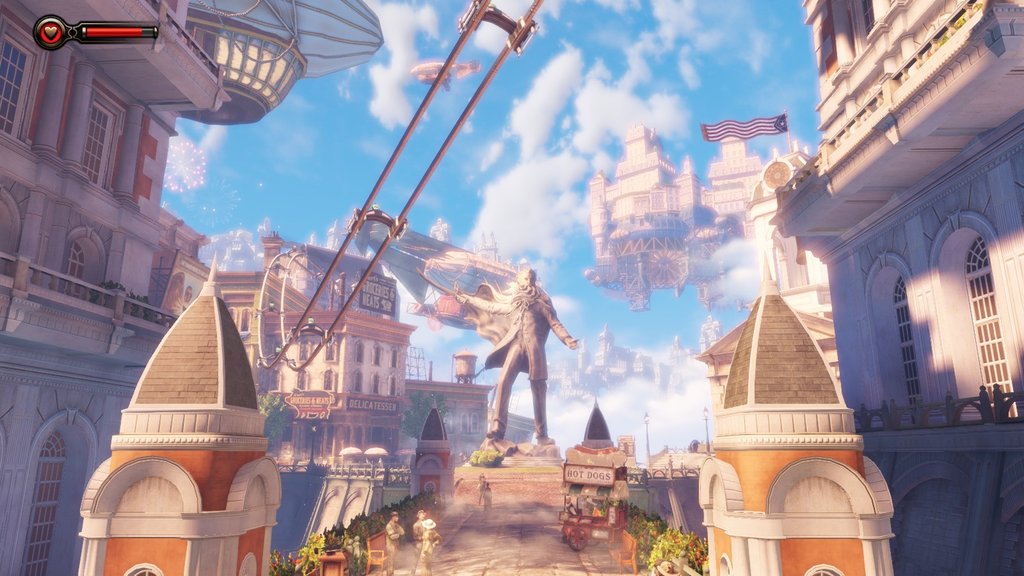 It’s hard to hide secrets when it’s this bright all the time.

These are, to my mind, the most egregious and unnecessary of Bioshock Infiniteâ€™s flaws. There are others, the lack of enemy variety, the removal of ammo types, and the whole Tonics vs. Gear issue. Ultimately none of these complaints detracts from what makes infinite a great game. The story, the design, the ideals of Bioshock Infinite are not diluted by its flawed presentation. And if it was a movie/novel/comic book it would be beyond reproach. But itâ€™s not, itâ€™s a videogame. And thus the mechanics have to be judged at least as importantly, if not more so, than the story. Itâ€™s fair to say that the sequel to Bioshock had a lot to live up to. And I know a lack of innovation is the curse of sequels, but even a simply adding a fresh coat of paint onto the core of the originalâ€™s mechanics would have added a level of depth it was sorely missing.Â  As it stands, Bioshock Infinite is a perfectly competent First-Person Shooter. But competent is hardly enough for a game of this caliber. Hopefully whenever Bioshock Infinite 2 (Electric Boogaloo) is inevitably green lit, theyâ€™ll try to make the gameplay as complex and as deep as the narrative. Because the Bioshock franchise is great. And it deserves to be good too.

Staff Writer Reuben is a student, a nerd and an all round SpaceBadass. When heâ€™s not playing games in his free time he reads anything he can get his hands on, is an aspiring stand-up comedian and makes gaming videos on Youtube. He decied to try writing because it was neater than leaving all of the words in his head, where they were liable to clutter the place up. Heâ€™s owned every iteration of the Pokemon franchise (he usually chooses the Grass starter, except Chikorita, because why would you?), completed Borderlands 2 more times than can possibly be good for his mental health and owns a worryingly large collection of gaming reference t-shirts. He usually plays both PS3 and Xbox 360 games, but is probably going to jump to PC for the next generation. He hopes to contribute as much to SpawnFirst as he can, and he feels really stange about writing in third person. He may also have over written his bio. Xbox Live: CruelCoffee, PSN and Steam: RoboFish_MkII
You might also like
2K GamesArticlesOpinion