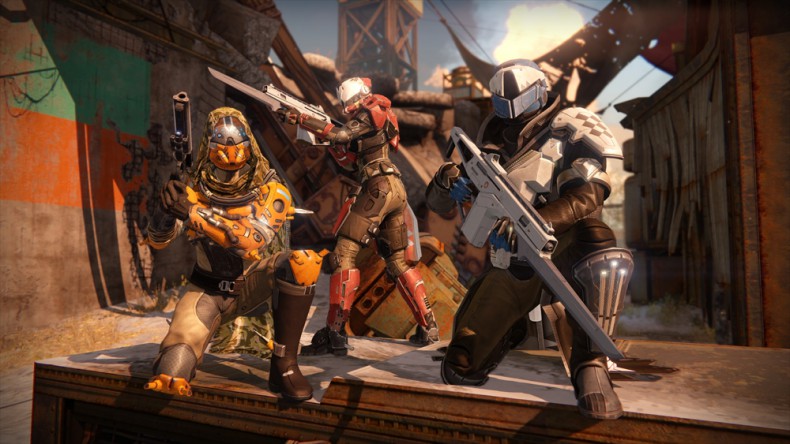 This past week, the details of the “exclusive” DLC Bungie is bringing to PS4 when Destiny  releases in September came to light via PlayStation Blog. Not only that, but the specific content was detailed—the Dust Palace strike mission, the Exodus Blue competitive multiplayer map, exclusive gear, weapons, and ships. OK, well, it will be out in a month for the Xbox One and Xbox 360, right?

Unlike Call of Duty, which releases content exclusively to Xbox platforms one month before it arrives on PlayStation, this DLC seems like it will remain exclusive for a year (though Activision both confirmed then denied this within hours). Either way, it seems Sony is determined to take Bungie’s first shooter out from under Microsoft’s umbrella and make it a destination game for the PS4.

On Day Zero of E3, nearly every game shown during the press conferences that would be appearing on both platforms were announced with some sort of exclusive content.

But why? Does the existence of exclusive DLC really matter to gamers? What about exclusive DLC pre-order bonuses? Does that influence a consumer’s decision one way or the other?

We decided to ask a few SpawnStaffers about their opinions on the matter: Exclusive DLC, and exclusives in general, are quite possibly the worst argument I have ever heard.
I was a huge fan of the Assassin’s Creed series up until Black Flag, and never bought a copy on the PS3 “because of better DLC”. I have a strong preference for the Xbox controller (my huge hands have a factor in this) and the Xbox in general. I don’t feel like someone’s decision should be swayed for a minor amount of content.
If DLC has little to no effect on the story, then why are we even bothering? I can’t recall the last time I purchased DLC of any sort. For me, I always bought a game depending on which console I played the most. At the time when this started becoming a thing, I was playing on the Xbox 360 most of the time so all multiplatform games ended up on there. Most ‘exclusive’ DLC can be retrieved in one way or another at a later date. They never really affected the game too much so it wasn’t a concern.

The only time DLC did sway my decision was with Resident Evil 6. The “Archives” (360) and “Anthology” (PS3) editions of the game didn’t come with DLC, but whole digital copies of other Resident Evil games. The 360 version had the fourth and fifth games, Code Veronica X, and an animated movie, while the PS3 version had the first five games for the same price of $99.99. At that point it was more of a deal rather than exclusive DLC. I understand it was a collector’s edition, but the content was still different for each console so it was deemed ‘exclusive.’ I don’t see exclusive DLC as a huge deal. Just get it for the system you want, because the most you’re missing out on is an extra mission with an hour of gameplay and some extra costumes. Console exclusive DLC has never determined whether I buy a game or not. If I make a pre-order, I of course do it first and foremost for the basic core experience, and anything else is just a cool incentive for picking the game up at launch. Regardless, much of the content that developers try to pass off as exclusive not only are things I wouldn’t jump over myself to throw money at them for, such as extra weapons and costumes that should of been in the game anyhow, but also would be available to pick up in a year regardless. In short, it’s basically a cheap way for game developers to cash in on a couple of extra dollars by giving customers a nice, extra reward. It’s a sad state of affairs when you can’t count the number of editions a game launches with on one hand, I used to think the Call of Duty franchise was pushing it when it introduced the Hardened and Prestige editions. Watch Dogs  came along and laughed in its face, launching with nine different versions of the game. Each version came with a different piece of exclusive DLC, meaning that if you were dead set on experiencing absolutely everything Watch Dogs  has to offer you’d have to buy it nine times.

Back in the day when a game launched its ‘DLC’ was included in the game, free of charge, and would be unlocked when you accomplished tasks within the game, not when you unlocked your wallet. I will never buy a game based on what exclusive DLC it comes with, nor will I buy a game/console for its timed exclusive DLC. If a publisher/developer wants to segregate its audience by favoring one console over the other than I’m happy to play the waiting game or simply not buy their game at all. There’s plenty of stuff out there to play already, and besides my backlog is already pretty big. I can’t say that it’s never swayed me because the promise of exclusive DLC for Grand Theft Auto IV  on Xbox 360 most certainly weighed in my decision for which version I was going to get. Same with Watch Dogs  and its “60 minutes of additional content.” Granted, there really wasn’t much to it, but since I have both the PS4 and Xbox One, I have to make my decisions somehow. Controller preference means so little to me that it’s not even remotely a factor. Online only mattered to me last generation when PSN wasn’t even close to being comparable to Xbox Live—that’s not the case anymore, no matter what anyone tries to tell you. And trophies/achievements only matter so much. So for me what it comes down to is content and experience.

Sure, for the first six months, most games looked better on PS4, but that gap is closing fast and won’t be an issue for much longer. So yeah, the promise of additional content is enough to sway me for certain games. As miniscule as it might be, when it doesn’t really matter THAT much where I play the game, I’ll use that little bit of incentive to push me over the edge. That’s why I’ve planned on getting Evolve  on Xbox One—that exclusive beta, baby.

I am not ashamed.

So now that you’ve heard from some of us on how we feel about exclusive DLC, let us know what you think in the comments below!

Sean is a semi-retired hardcore kid, semi-grown up and transplanted from his original home of New York to Los Angeles. A lover and critic of movies, music and video games, Sean is always quick with an opinion, a heaping dose of snark, and a healthy dose of pragmatism. PSN & Live Gamertag: N2NOther
You might also like
ActivisionArticlesFeatures