Indie Interview: A Hat in Time 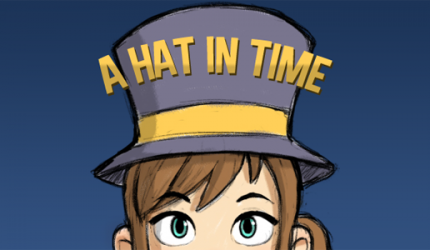 Platformers in the video game industry have a unique place. Â It hosts some of the most nostalgic and beloved franchises of all time, such as Castelvania,Â Mega ManÂ andÂ Mario. Â And, while the genre used to be immensely popular, major publishers have since moved on to bigger markets, leaving a huge itch in gamers that is usually scratched by online flash games and indie productions.

This is where we meetÂ A Hat in Time. Â Indie developer Mecha the Slag’s new title is focused on bringing fans of classic collectible-happy platformers into the twenty-first century withÂ gorgeousÂ art direction and innovative gameplay features, while still holding on to the traditional zaniness and pure fun of the genre. Â I was able to get in touch with Jonas Kaerlev, the director ofÂ A Hat in Time, who spoke more about this intriguing project.

Nolan: Can you give us a short synopsis of the plot, and how important it is to theÂ overall game?

Jonas: The game is about Hat Kid, an interstellar traveler on a quest to saveÂ time and space as it’s falling apart into tiny pieces. On her way, sheÂ meets Mustache Girl, who wants to break these pieces to release theirÂ energy and use it for evil. There are a lot of twist and turns alongÂ the way, like Hat Kid teaming up with Tim the Time Lord, who is the cause ofÂ all the trouble. The story isn’t as dominant a factor as gameplay is.

Nolan: A Hat in Time is said to have roots back to classic platformers like BanjoÂ Kazooie and Donkey Kong Country 64. Â What are the biggest similarities, and whatÂ distinguishes A Hat in Time from those titles?

Jonas:Â  Similar to Banjo Kazooie, I decided to focus on non-linear levels with a lotÂ going on in them. The fact that almost every section of a level plays aÂ significant role really helps make the levels feel very alive and unique.Â But unlike Banjo Kazooie, not every ‘jiggy’ is available at once.

IÂ decided to split events in the levels into several acts, as it wouldÂ allow us to drastically change how the levels look. A really good exampleÂ of this is in A Hat in Time‘s first chapter, ‘Down with the Mafia’, whereÂ the chapter’s Act 4 completely changes the level by flooding it with lava.

Nolan: In the last few years, games have begun to add a considerable amount of depthÂ to gameplay by adding unlockable abilities and items, upgrade systems,Â experience points, etc. Â Will A Hat in Time have a similar system, or will itÂ focus on adhering to much more simplistic gameplay?

Jonas: For A Hat in Time there are Power Pins, costumes, and Energy Bits toÂ collect. Power Pins enable new attacks with a wide variety of features andÂ costumes allows Hat Kid to dress as weird and crazy as the creatures that liveÂ in her world. Collecting enough Energy Bits also unlock new parts of theÂ game in real Banjo Kazooie-style. In addition, Hat Kid has a personalÂ checklist of ‘things to do before I grow up’, and it’s up to the player toÂ complete this extensive list of over 100 crazy, fun and weird challenges!

While there is currently no release date set forÂ A Hat in Time, Mecha the Slag is hopeful that there will be a public unveiling this summer, with an early 2014 release. Even though much ofÂ A Hat in TimeÂ is still under wraps, it’s already shaping up to be one of the most distinct and interesting indie titles of the near future.

To stay up to date on all your hat-related news, make sure to likeÂ A Hat in TimeÂ on Facebook, visit the developerÂ website, and Greenlight a Steam release! Â Stay tuned at SpawnFirst for more indie previews.

Former Contributor Nolan Alber is a college student from North Dakota. He enjoys rescuing puppies from burning buildings and beating up criminals on the streets, and often lies about his interests to make himself look better. Nolan is an avid gamer on PlayStation 3 and PC. He impulse-buys more video games than he can actually play, and is a fan of shooters and fighting games (even though heâ€™s terrible at the latter).
You might also like
indieArticlesInterviews