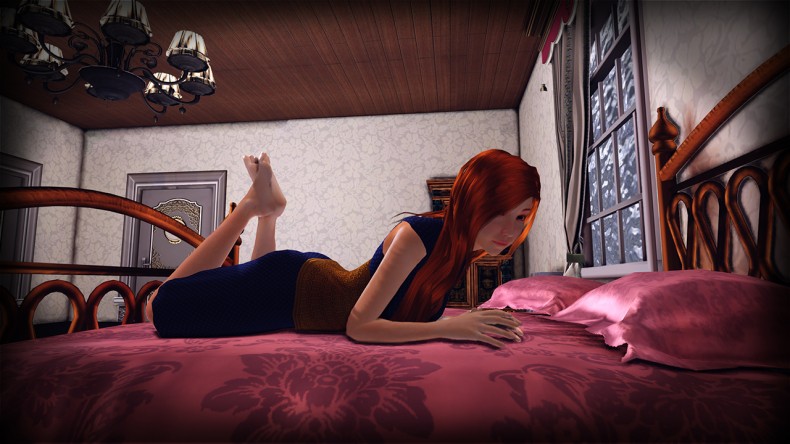 Not many folks in the games industry have heard of The Domaginarium or Nick Borrego. That’s unfortunate because The Domaginarium is the developer behind the promising psychological horror game, Enola, which SpawnFirst’s own Justin “SlasherJPC” Celani did a Let’s Play video of last year, and Borrego is a talented musician who just so happens to have composed the entirety of Enola‘s soundtrack aside from one song.

And what a soundtrack it is! Seriously, be sure to check it out now. It’s atmospheric and interesting throughout. Borrego granted me early access to Enola‘s soundtrack, and I really love it. I can’t wait to play Enola one day when when all the different pieces come together to form a cohesive whole. Borrego said he first discovered Enola through Twitter in 2011. At that point the game was still very much in its early stages. Borrego eventually took on a sort of “jack of all trades” position with the game.

“One thing led to the next, and eventually I was handling the recruiting of developers for the project, voiceover directing, conducting Google+ meetings and composing the musical score for the game”

Borrego claims to have been influenced by the likes of Igor Stravinsky and Bernard Herrmann, as well as Stanley Kubrick’s “The Shining,”Â while composing the score for Enola. Borrego’s adoration for Herrmann and “The Shining” shows, especially in tracks like “Thanks to You” and “I’ll Be Forever Yours,” while the operatic undertones present in several of Enola‘s musical offerings are certainly reminiscent of Stravinsky.

Borrego also looked to other video game composers for inspiration. His choices in that department, while not all that surprising, are pretty fitting.

As many people who play games will know, Yamaoka composed several of theÂ Silent HillÂ games, Schyman composed theÂ BioShockÂ games and Graves composed theÂ Dead SpaceÂ games. While Enola is nothing like any of those games in terms of gameplay, it does contain bits and pieces ofÂ Silent Hill‘s randomness, BioShock‘s depressing atmosphere andÂ Dead Space‘s dread-filled corridors. Borrego’s soundtrack ties hand-in-hand to every second of the game. It’s obvious he explored and enriched Enola with a passionate attention to detail.

Borrego is a fan of many different genres of music. He enjoys a lot of progressive metal, and has always been a fan of experiencing a well-arranged rock album. “Altered State” by TesseracT is my new favorite.” Borrego enjoys breaking down games in order to capture their “essence.”, and loves knowing how to put the right emphasis on the right parts of a game’s story.

“Enola is a love story with a horror flavor to it, so it allows for more than just scary “depths of hell” dynamics. Although when I’m scoring the scarier parts, I like to occasionally scroll through my Facebook news feed to see how pictures of my friends go with the music. It provides a bit of comic relief as well as proving that almost anything can be scarier with the right music,”

(I bet any random picture of myself fits the role perfectly).

Borrego always gravitates to somber or scary projects. “I’m a fan of composing darker scores.Â I have done a couple lighthearted kids game and chip tune projects, and those were a lot of fun, but I never turn down a horror film or game that plays with the mind the way Enola does.” Borrego loves being able to collaborate with The Domaginarium completely online. “We’re living in a time where the gaps are closing on what limits your ability to create something awesome with a team of like-minded artists. The director of the game lives in El Salvador, and its developers all live in separate states, but that kind of distance doesn’t prevent us from creating something together. And if anyone wants to support the project, try out the demo, purchase the soundtrack, or even better, purchase the beta,”

Borrego recently got engaged. He’s always on the lookout for new projects, and has a very positive outlook on life.

“I like to take every day as an opportunity to evolve. How can each daily experience improve how I contribute to the world? Some days don’t present anything that seems very significant, but some days do. Everything adds up to something bigger, and I try to keep that in mind at all times.”

Be sure to follow Nick Borrego on Twitter: @NickBorrego. Anyone interested in Enola should also follow @TheDomaginarium. The Enola soundtrack is available for purchase on Bandcamp. Also, The Domaginarium needs some help for Enola to get on Steam, so head on over to the game’s official Steam Greenlight page and show it some love.
4 people like this
Articles, Features
Bioshockcall of dutyDead SpaceenolaFacebookherrmannjason gravesnick borregoschymanSilent Hillstravinskytesseractthe domaginariumthe shiningyamaoka

Features Editor Buddy was a journalism major at the University of Alabama. He now spends his days writing novels that will probably never get published and wishing he were an extra in an Anthony Hopkins film. He's been gaming since he can remember and has owned every console from the NES to the TurboGrafx-16 to, yes, even the Phillips CD-i. He loves all games, but his favorite genres are shooters and RPGs. His favorite game is The Legend of Zelda: Ocarina of Time.
You might also like
BioshockArticlesFeaturesBuddy Acker