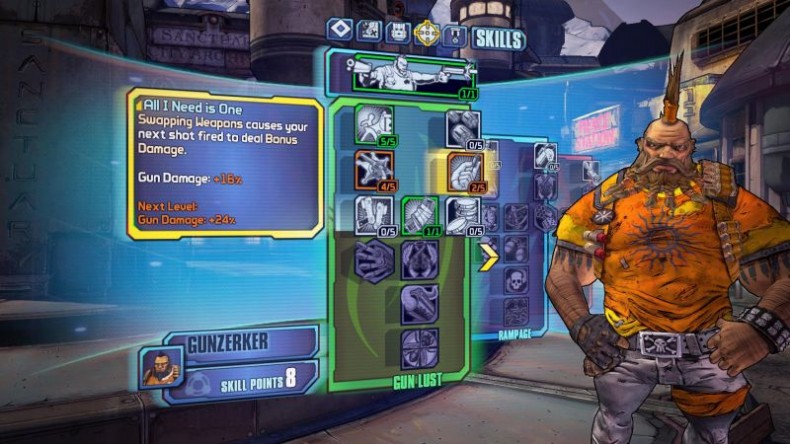 Numbers are fun. Until recently I would have considered this a personal opinion and not simplyÂ Â  of counting. Hit points, Experience Points, damage counters, cool-down timers, all different mechanics hinging on the application of calculation and counting. And theyâ€™re everywhere. Previously said affectations were just the sole preserve of RPGs, and strategy games. But then something changed.Â  In just the space of just a few years almost every game on the market has come to contain â€˜RPG-like elementsâ€™, a term as vague as it is unhelpful. Suffice to say; almost every single player game now has some form of progression system. In many games it makes sense, giving the player a reason and reward for playing, and drip feeding new abilities and mechanics to keep gameplay entertaining and fun. In plenty of others however, it just feels tacked on. I lose 23 Defense points by wearing this? Who cares!? It looks sooooo goooood…

For example, the first Darksiders game was similar to the Legend of Zelda games in terms of presentation. You played as a stoic hero, who journeyed across a variety of landscapes on horseback, unlocking abilities and gaining equipment as you went. Darksiders 2 however, adopted a slightly different tack. Fighting enemies caused coloured numbers to fly off of them, you gained XP and acquired different equip able gear items that affected your stats. The problem is that it was implemented a little poorly. Skill trees were fairly barebones; the dropped loot had only the most negligible affects and didnâ€™t have more than a few repetitive cosmetic changes. And yet Iâ€™m currently halfway through my second play through. All because the promise of finding and obtaining shiny new numbers kept me playing.

Then there are the games where the application of these elements fits with the atmosphere of the game but causes problems within the context. Far Cry 3 was one of my favourite games of last year. It was deep, engaging and totally immersive. A large part of the game was the skill tree, filled with different kinds of abilities across three categories: close combat and damage; ranged combat and agility; stealth and survival. Now the game makes sure that the end tier skills across the categories are locked until certain story missions are completed, which is a nice touch. However Far Cryâ€™s completely open world aesthetic comes back to haunt it. Because thereâ€™s no immediate insistence that you go and complete the story missions, you can go and liberate bases, unlock weapons, and commit multiple crimes against nature by hunting a variety of endangered species for fun and profit. And all these things get you upgrades, as well as amassing XP points. Ok, this might be the other reason I play Far Cry 3 so much.

For a chronic sidequester like me though, this causes a few, admittedly minor, problems. Because Iâ€™ve amassed a lot of high level weapons and gear and pickups from the level or unlocks from completing missions are rendered redundant. And although not all the skills are available early on, the amassed skill points mean that as soon as the skills are unlocked I get a flood of new skill and abilities. As fun as this was, it did undermine the gameâ€™s whole story; rather than a gradual increase in my characterâ€™s prowess, heâ€™d periodically get exponentially better at murdering things.

Perhaps the most successful fusion of modern gameplay and old school loot â€˜em ups is the Borderlands franchise; specifically Borderlands 2. In addition to the watching the damage and status affects spiral off your target, you can watch XP points fill the levelling bar with every kill, drop the points into the various skills that decorate the three distinct trees and even level them up, panic watching your shield and health bars increase and decrease,Â  all at the same time. And then, in addition to all that, you get Borderlandâ€™s greatest asset; its loot. Much is made of the gameâ€™s procedurally generated weapons, and although the much quoted â€™80 Bazillion Gunsâ€™ is not a totally accurate assessment (itâ€™s actually closer to Eleventy Squillion), thereâ€™s no denying that that constant stream of colour coded trinkets exploding from every corpse and chest is very very satisfying. And every weapon has a variety of statistics attached to it as well, meaning thereâ€™s even more time spent comparing and evaluating every detail of each loot drop. And the total of all these combined factors goes into making Borderlands 2 more addictive that painkillers, heroin and Pringles combined. Even the all-consuming juggernaut of CoD gets in on the act. Although the characters of the games themselves are completely devoid of personality in a variety of ways the progression system from the series multiplayer has become the norm, with plenty of games, like the aforementioned Far Cry 3, tacking on the same mix of features, modes and frustrating/enticing sense of grinding to level up and unlock more/ different stuffs. I know that Far Cry 3â€™s multiplayer is utterly pointless, kind of boring and generally not very good, but that didnâ€™t stop me spending several hours playing it over a weekend, watching my levels and upgrades stack up before my brain reminded me that there were other things that I could have been doing.

Ultimately, shoehorning mechanics into games that donâ€™t need them seems to be an inevitable part of developersâ€™ ever increasing technical abilities. They can include as many technical features as they want, and so they do, regardless of whether or not they fit within the game. Or maybe itâ€™s a shallow cash grab to try jam in features that they think that players want. Or maybe itâ€™s just because game developers are a bunch of nerds like me, who find stats and grinding to be an inordinate amount of fun. Whatever the reason, unnecessary numbers are probably going to be as prominent in the next gaming generation as they were in this one. And I shudder to think what itâ€™ll be like collecting loot drops for the CoD Ghosts dog. I mean Iâ€™ll still do it, but Iâ€™ll resent myself. Probably.

Staff Writer Reuben is a student, a nerd and an all round SpaceBadass. When heâ€™s not playing games in his free time he reads anything he can get his hands on, is an aspiring stand-up comedian and makes gaming videos on Youtube. He decied to try writing because it was neater than leaving all of the words in his head, where they were liable to clutter the place up. Heâ€™s owned every iteration of the Pokemon franchise (he usually chooses the Grass starter, except Chikorita, because why would you?), completed Borderlands 2 more times than can possibly be good for his mental health and owns a worryingly large collection of gaming reference t-shirts. He usually plays both PS3 and Xbox 360 games, but is probably going to jump to PC for the next generation. He hopes to contribute as much to SpawnFirst as he can, and he feels really stange about writing in third person. He may also have over written his bio. Xbox Live: CruelCoffee, PSN and Steam: RoboFish_MkII
You might also like
Borderlands 2ArticlesOpinion