How to Survive Mega-Review 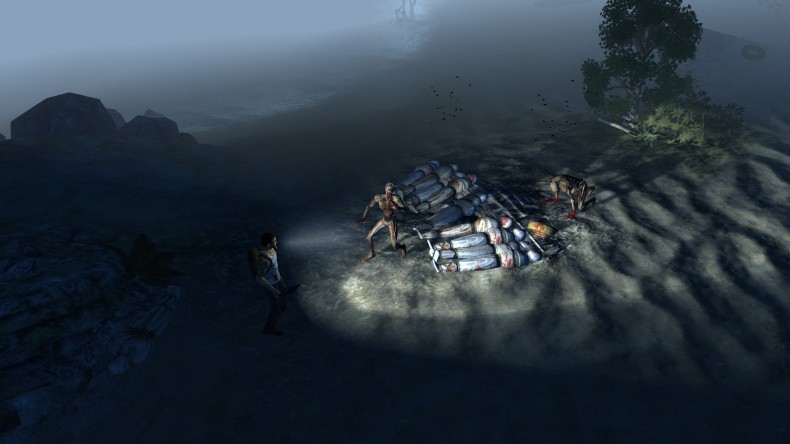 While How to Survive does have some flaws and annoying controls, the fun that you'll have with this zombie-licious title will almost always shadow over the frustration. It's definitely worth a download, and will keep you busy until the next enjoyable zombie game comes out on consoles

When How to Survive first appeared on my radar, I was almost immediately sold. A survival horror game with a crazy Russian guy teaching me how to live during a zombie apocalypse; whatâ€™s not to like? Well Iâ€™m happy to say that my intuition is pretty good at picking out games because, apart from a few issues, How to Survive is an all around enjoyable game.

The story of How to Survive is nothing really to write home about. You play as one of 3 characters marooned on an group of islands that just so happens to be infested with zombies. Thus your struggle with survival begins but, luckily, youâ€™re not the only one trying to escape the island. There are other survivors, but none are more prominent or hilarious than Kovac: a crazed Russian that has lovingly put together a guide on how to survive (get it?) on these doomed islands. Following his instructions, you struggle your way from island to island, trying to find parts to repair a seaplane to get the hell off of the zombie-ridden archipelago. 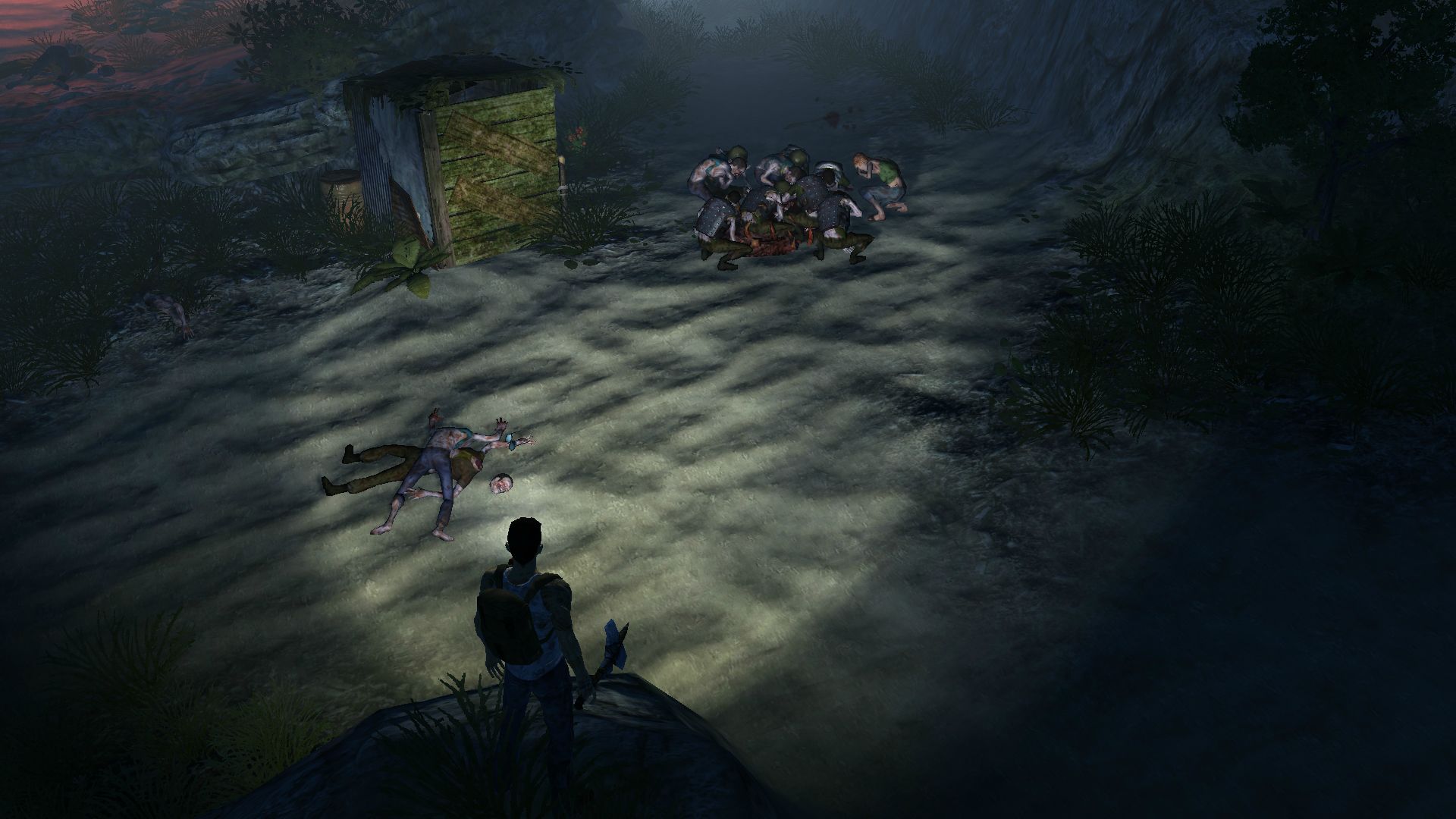 In How to Survive, survival is, obviously, the name of the game. As you play, you have to keep an eye on not only your health, but also your hunger, thirst, and energy. If you let any of the gauges get too low, your character will start to suffer and eventually die if any of them hit zero. For example, if you let your hydration levels get too low, youâ€™re aim with range weapons becomes much less accurate, making it hard to pull off those much needed head shots. It was both interesting and wrecking seeing your vitals drop below 50% and your character visibly react to their poor state, especially when a swarm of flesh eating monsters are closing in. So to avoid finding yourself in sticky situation, make sure to replenish your vitals by drinking water from wells found around the islands, cooking and eating food, sleeping in shelters, and using herbs/med packs to mend your wounds.

Keeping your vitals up is only half the battle. There is still the matter of the zombies that are trying to eat your face off. As you travel around the island, youâ€™ll find random knick-knacks like string, bolts, and chains which are useless by themselves, but by finding blueprints laying around the islands provided by your BFFL Kovac, you can build deadly, zombie slaying weapons. For example, by combining a harpoon handle, a diving tank, a flare tube, and some mechanical tools you a can create an all powerful shotgun that fires what would be useless junk deep into your enemies skulls. 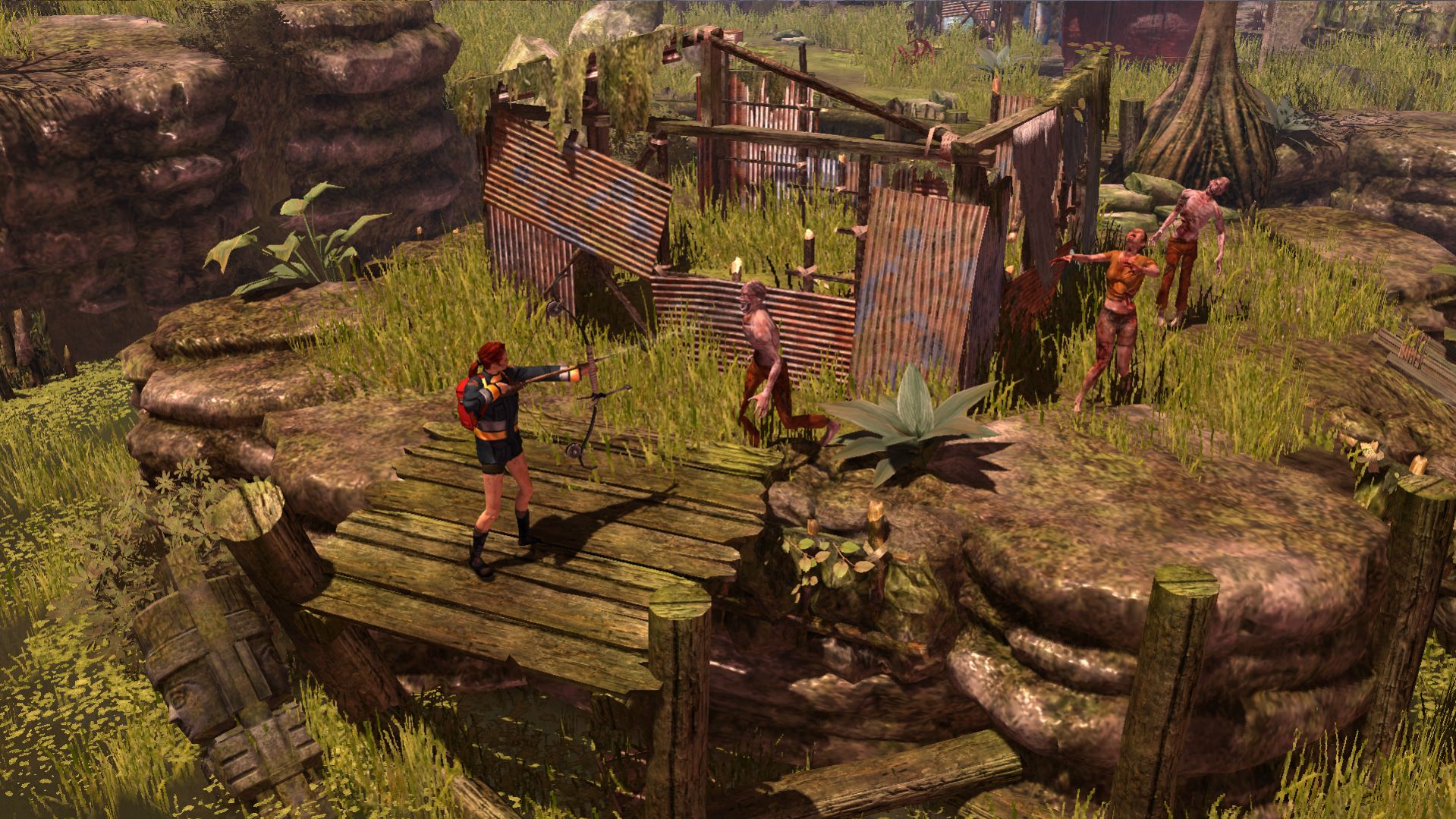 Being able to assemble better stuff out of the random junk you find is both fun and exciting. There were a lot of times I would debate for 5 minutes on which items to pick up because they looked important but my inventory was full and didn’t know what to drop. It vaguely reminded me of Borderlands, where I was constantly in search for better loot, although in this case I was looking for stuff to build better weapons, armor and potions. Also similar to Borderlands, How to Survive features a skill tree for each character that you fill out as you level up. The abilities you unlock as you move through the trees include slower depletion rates for thirst, hunger, and energy, and the ability to make cool stuff like explosive arrows. These perks add some depth to the game, and, since itâ€™s impossible to fill out the skill tree on your first play through, add some re-playability as well.

Do you want a second opinion? Check out SlasherJPC’s video review of How to Survive, where he rates the game a 7.5 out of 10!

The enemies that you encounter in How to Survive are pretty standard for the most part. You have your typical slow moving zombies, your fat zombies that explode (kind of like the boomers in Left 4 Dead, or the floaters in Dead Island), and your berserker, effing hard to kill zombies (like the tank in L4D). The game also features a day/night cycle, which brings a new element to the table. Not only do you need a flashlight or torch to see better, but you also get attacked by these creatures that look like Gollum from Lord of the Rings. Luckily, these fast little buggers hate light, so just shack up around a campfire or flash them with your flashlight to get them to back off. Unfortunately, campsites are pretty hefty distances apart, torches burn out, flashlights only work in the direction that you’re facing, and these nocturnal enemies DO NOT stop coming until the sun rises. There were several times where I was already in a big fight and then the sun went down. Needless to say, I didn’t last long. In addition to these night time foes, the game also introduces infected animals like deer, crabs, and ostriches. I don’t think Iâ€™ve ever seen a zombie game where the wild life was infected too, so I was pleasantly surprised. That is, until I found out how hard they are to kill, then I was just busy running away from them as best I could.

So up until this point in the review, How to Survive sounds like a pretty awesome game (which it is) but it did have its shortcomings. My first issue was with the controls: they felt unnatural and took me a good while to pick up (why is the B button a menu?). I also had a beef with my character only being able to sprint 5 feet before he was exhausted. I mean come on, do some cardio, bro! The pace of the game was a little off, as I went from being a God amongst zombies to being the kid picked last in dodgeball in a matter of minutes. While this could be an issue for some, I liked the challenge and it really forced me to change my strategy. The missions in story mode were very straight forward: go-here-and-do-that missions, with a lot of backtracking. So people might also be turned off by that, but it never really bothered me because I was just busy trying to keep myself alive and hydrated.

My biggest complaint was the autosave feature. I played for a good couple hours one day, made a lot of progress, ventured half way through the final island and then decided to call it a day. When I turned the game back on, I was back on the 3rd island and NONE of my progress from the 4th island saved. I was very pissed off to say the least, but once I got over it, I was back to enjoying myself once again.

The graphics in How to Survive are pretty solid of the size of the game (about 1.7 GB). The lighting of the fires and flashlights at night are wonderful and, while the character models are nothing too exciting, I did enjoy watching my character get more and more dirt/blood covered as I progressed through the game. The environmental graphics, while repetitive, served their purpose and didn’t really affect my experience at all.

Voice acting in the game was passable at best, but was carried by the actor who voiced Kovac. He was hilarious, on point, and was enjoyable to talk to in-game. As for the sound effects, the zombie noises were also very standard as well; just a lot of wheezing, groaning, and growling. The background music was repetitive, although I didn’t really notice as I was getting swarmed by dozens of zombies at a time. 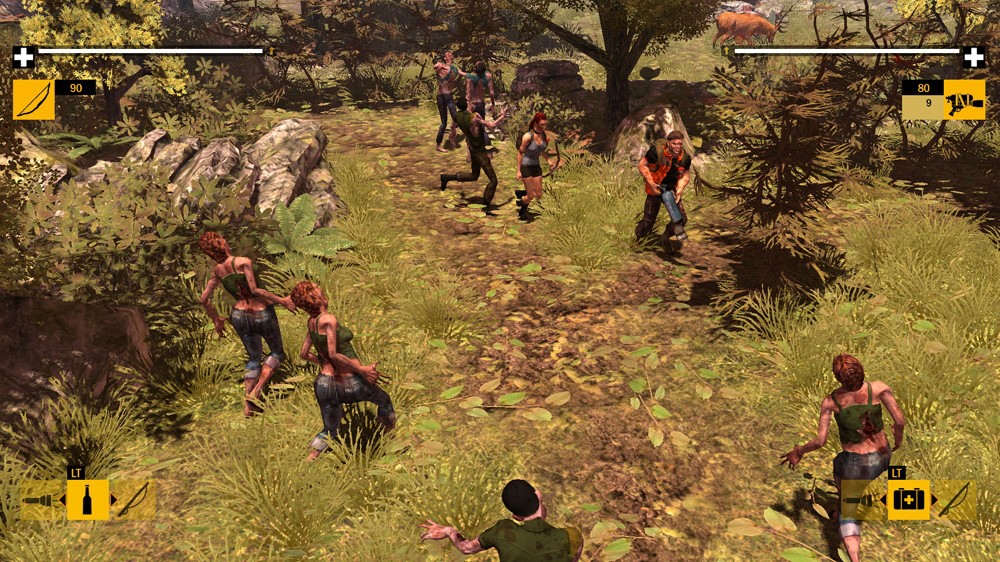 How to Survive features both online and local multiplayer for both story and challenge mode. While it can only be you, adding a friend on the island is SO much more fun than doing it by yourself. I had my girlfriend play about 10 minutes of the game with me and after about 30 seconds we were laughing hysterically as she went charging into a horde of zombies with only a stick to defend herself. The bottom line is, while co-op does not affect the story at all, I recommend grabbing a friend to play with you because good times will ensue.

As I mentioned above, some of the biggest issues, I was able to overlook. These include the repetitive missions and the poor difficulty curve. The ones I can’t overlook are the occasionally poor controls and loss of progress thanks to autosave. However, these issues aside, How to Survive is a solid title.

How to Survive features a challenge mode that is very straight forward: start with nothing, and try to work your way across the island to the plane. While that sounds super easy and straightforward, trust me: itâ€™s not. This mode is perfect for people who don’t want to do the repetitive missions and just kill zombies. The game also features a herbology book where all you basically find rare plants to add to your collection (why youâ€™re making a plant scrap book in the middle of a zombie apocalypse is beyond me). This was less of a draw than the challenge mode but if you like finding stuff, have at it.

While How to Survive does have some flaws and annoying controls, the fun that you’ll have with this zombie-licious title will almost always shadow over the frustration. It’s definitely worth a download, and will keep you busy until the next enjoyable zombie game comes out on consoles.

SpawnCast Co-Host/Creative Co-Director Brian is member of the University of Mary Washingtonâ€™s class of 2012 and graduated with a BS in Computer Science. He has been gaming since the first day he held an original GameBoy in his hands and hasnâ€™t stopped since. He now plays mostly shooters and RPGs on his Xbox 360 but will occasionally work in some sports or fighting games when heâ€™s in the mood. He is also a huge fan of playing marathon sessions of Legend of Zelda when the opportunity arises.
You might also like
505 GamesGameplay VideoSlasherJPC