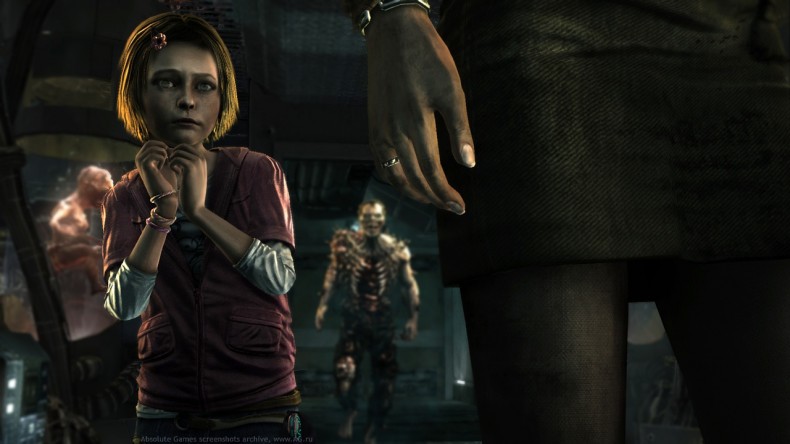 As mentioned in parts one and two of The Art of Horror, making a game that is both good and scary is a difficult task. Despite the difficulty level of creating this type of a game, many developers still try their best to leave their mark so others can lead by their examples. Unfortunately, the only mark left by their ideas, is the large crater filled with smoldering debris after their Hindenburg of a game has crashed into the ground. In this article, a few good examples of botched horror will be listed, where the only scary thing about these games is most of them are from the current generation of consoles. There is one term that makes gamers from around the word shudder with fear: escort mission. One of the most hated of mission types found in games just happens to be the key concept of the game Amy. Players assume the role of Lana, a woman who has rescued a young autistic girl named Amy from some sort of experimental facility. Shortly after rescuing the young girl, all hell breaks loose as the city is infested with zombie-like creatures.

Amy the game wants players to be stealthy and avoid combat, but this is nearly impossible. First, the controls are awkward and clunky. Second, dragging around a second person makes stealth more difficult, and lastly, Lana is wearing high heels. Considering how many shopping centers the two characters pass by, one would figure Lana could change into a more appropriate attire for the situation. I guess not being a fashion victim is worth the high risk of being an actual victim.

Stealth doesn’t necessarily matter since most zombies can be beat down easily with a medium-sized piece of balsa wood. Couple this with the fact that being away from Amy kills Lana, add dumb puzzles, and poor level design, and you’ve got yourself a game that is both infuriating and not the least bit scary.

There are portions of the game where Amy, the kid, can use psychic powers that are mildly useful, but when Lana first witnesses this she doesn’t even bat an eye and just gives the girl encouragement. Then again, had Carrie White received more encouragement and praise for her abilities, I suppose less people would be chewing on the ceiling rafters of a school gymnasium. Want to go someplace truly terrifying, then go to the unlimited play section of Gamefly. Yeah there are some good games, but for every one good game, there are twenty bad ones and many of the good games don’t even work. Terrifying right?Â Of course it was here I found a gloriously bad attempt at horror gaming.

I consider this game to be the “Buffalo Bill” of the horror genre because it wants to be Resident Evil 4 so bad, that it has stitched together a nice suit made from the skins of other horrors games.Â Cold Fear stars Tom Hansen, a cocky, unlikable man who was too skilled for the Navy Seals but decided he was just right for the Coast Guard.Â Hansen, ordered to board a freighter alone after Seal Team 6 was annihilated, is tasked with finding out what happened while rescuing survivors.

Unfortunately for the survivors, the ship is filled with super zombies and for no apparent reason other than they are Russian, Hansen shoots them on sight; so there is a little bit of Call of Duty in the skin jacket as well.Â There is one person he decides to not shoot only because she is a woman around his age so by the laws of video game narrative, he automatically loves her.

Combat is decent only because it is Resident Evil 4‘s control scheme, but everything else is terrible.Â You fight the same three enemies throughout the game and the game tries to be creative by making difficult to move due to the ship’s turbulence against stormy waters.Â This means Hansen will either be reenacting how a Slip-and-Slide works, usually right off the boat, or falling off a platform that just happens to not have any railing.Â  Sorry Cold Fear, but you’re going to need some better materials for your jacket.

Resident Evil 4 was a superb game that defined a generation of consoles; it also set the bar way too high for any games after.Â  While many people would place the Resident Evil spinoffs in a list like this, I believe those were experiments and if the developer is willing to try new things before a bigger release, that’s a good thing.Â  What’s truly awful in every sense of the word though, is Resident Evil 6.

Remember how cool some of the protagonists were in the previous games, well bad news, they have been re-imagined.Â  Leon begins the game reasoning with a zombie, Chris Redfield goes from being Captain America to town drunk, and the new smart-mouthed moron, Jake, deserves nothing more than to have some sense kicked into him by implementing a nearby curb.

RE 6 plays like a modern third-person shooter, but restricts ammo and supplies like a survival horror despite throwing tons of bullet-sponge enemies at players.Â  Healing herbs are assigned a single button, but provide little effect so the protagonists are constantly popping pills like a rock star with a custom Pez dispenser.Â  Most of the game just happens to be focused around extremely linear and restricted action sequences and boss fights, both filled with QTEs.

It’s really annoying to fight the same boss repeatedly because the protagonists can’t be bothered to put an extra round in the beast, kick it or few times, or do what most normal people do and poke the damn thing with a stick before leaving the room.Â  Besides, who would want to go through the boss fights again, they’re terrible.Â  I’m sorry Capcom, but no mutant politician that can turn into a T-Rex and a giant chain gun-wielding gazelle can replace Nemesis or the Tyrant. Out of all the games on this list, this one had the most potential to be great.Â  The game uses the environment and various objects for both combat and puzzles, Prince of Persia-style platforming, driving, and most important, the use of fire as a crucial gameplay element.Â  Unfortunately the execution of all of these things is atrocious.

Edward Carnby, the series’ main character, returns for another go around to defeat the Devil and prevent the end of the world.Â  At least that’s what I think the plot is because some guy mentions something about a “lightbringer” and somebody loosely translates it to Satan in Latin so everybody just goes along with it.Â The story is dumb, poorly acted, poorly written, and just like in Cold Fear, Carnby falls in love with his support character solely on that fact that she is the only female in the area.

“What about the gameplay, though?” one might ask; well it’s also stupid and poorly handled.Â  Carnby controls like he has a bungee strap tied around his legs, combat is extremely clunky and inaccurate, and the set pieces range from extremely vexing to unintentionally hilarious.Â  Only in this game can the player have their car carried away by demon bats which are actually called “batz” because the developers’ spellchecker was down at the time.

Granted the fire is cool and done fairly well and the in-game destruction is cool except for the character degradation. It is weird that every time I got into a particularly nasty fight, Carnby either walked away with either a new pair of jeans shorts or some custom assless chaps.Â Could somebody get this guy some pants… oh sorry Atari, I meant pantz. Here it is, the game tease from the Dreamcast article.Â Based very, very loosely from the films, this game is both a terrible film to game adaptation, but easily one of the worst Â games ever to disgrace the horror genre.Â There is nothing quite like it.

The story focused on Meg Rainman as she searches for what killed her boyfriend by playing an online video game set in a post-apocalyptic world.Â The only problem is, it’s not a game, it’s reality and her perceived reality was actually virtual; say what!Â Turns out the evil ghost girl’s tape was ineffective at killing people because nobody owns a VHS anymore, and decided to upgrade by posting cursed content on the internet.

Gameplay is essentially Resident Evil without any of its charm or finesse as you go from room to room searching for random items while gunning down the offspring of Sasquatch.Â It doesn’t help any that the game’s graphics are bland and the only creepy thing to be found is the strange character design, especially Meg’s.Â There is almost nothing in this game that is really unforgettable outside of the bad plot and the dumb final boss.

For players who somehow make it to the end, they must duel the Ring’s ghostly antagonist on the rooftop of a large building; it wouldn’t be any more climactic unless it were raining and a flock of doves flew past the battle.Â It’s not even scary since the ghost girl hops like a rabbit and stings the player by whipping her hair around like she’s in a Herbal Essences commercial.

This may very well be the worst survival horror game ever to be released. For anyone who still owns a Dreamcast, you can still find this game online cheap if you wish to torture yourself.Â  For the rest, just watch the movie or play a real horror game.

Former Contributor Chris West is a graduate of Texas Tech University where he earned his BS in Electronic Media in Communications. Chris has been passionate about games since he was a kid and today prefers games with a strong narrative. He also has a soft spot for horror games, legitimately scary games mind you, and any game claiming to be challenging, Dark Souls for example. When he isn't playing games, he is pursuing his other passions: music and photography. Chris can play both guitar and bass and then take high quality pictures of the performance with his camera. In the end, Chris enjoys writing about his passions and ideas, when he isn't destroying his friends in Call of Duty.
You might also like
SpawnFirstArticlesChris West