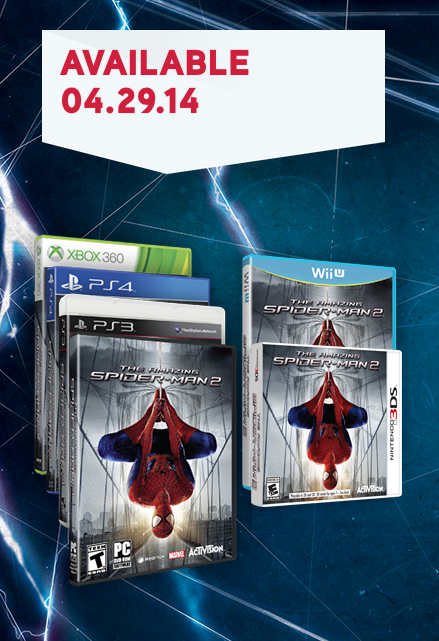 There has been talk and speculation of whether or not the Xbox One version of Amazing Spider-Man 2 would be cancelled or not. It seems that the truth has been revealed.

The game will be features on PS3, PS4, 3DS, Wii U, and the Xbox 360 but now the newest Xbox One.Â That draws the question of why? Is it the specs of the Xbox One hardware? Is it lack of cooperation from Microsoft or Activision as the developer? All we know is that is coming out for every console except Xbox One. It doesn’t make a company or developer look very good when they start delaying, canceling, or both.

Activision did reach out with the following statement.

â€œWe want to inform you that we are revising our release plans for [Amazing Spider-Man 2] on Xbox One,â€

It has been noticed that Activision has officially taken every reference to the Xbox One version off of their site. While Activision has yet to comment any further on the matter, the game is still set for release on all other platforms on April 29th. For more news like this, stay tuned on SpawnFirst.

Avid hockey fan & lover of the Chicago Blackhawks. Most of my time, when I am not trying to figure out who Tyler Perry is, I am gaming, working, learning, watching hockey, or spending the day with loved ones. I believe in greatness from small beginnings. PSN: http://psnprofiles.com/darlingharbour
You might also like
ActivisionThe Amazing Spider-Man 2xbox one